I'm trying to do something that should be relatively straight-forward - I want to setup a few domains and subdomains to redirect to the core domain for our site, but I want to put the redirects out on Cloudfront. Everything works except redirecting the root path - that gets me an XML file partly-describing the S3 bucket.

S3 allows you to setup an all-redirect bucket, like: 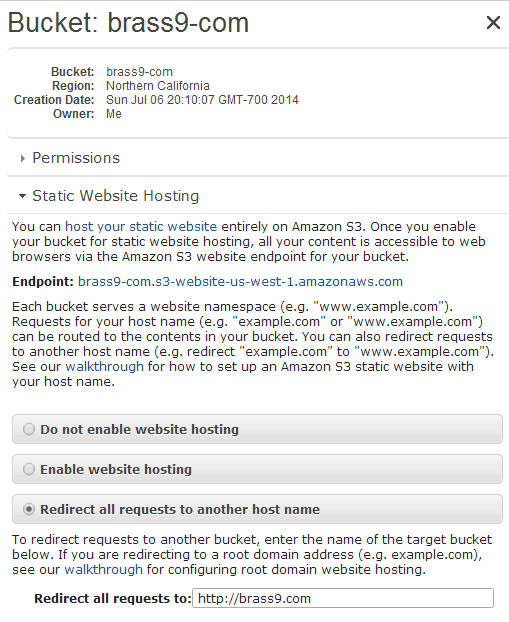 Testing this, the web endpoint (brass9-com.s3-website-us-west-1.amazonaws.com) does what it should - it redirects to brass9.com. Good.

Cloudfront lets you point at an S3 bucket, but the way it suggests you do so is wrong - instead of pointing at the bucket by its name, like brass9-com.s3.amazonaws.com, you need to use the Web Endpoint above. Other than that you can leave everything at its defaults and get good redirect behavior. So, a path like www.brass9.com/portfolio properly redirects to where it should. Also good.

The problem - the root domain redirect

The one thing that then fails to work is redirecting from plain www.brass9.com. Instead of getting you a redirect it gets you this odd result:

OK... . So this is not completely unexpected - because there's no Default Root Object. But what Default Root Object would I possibly specify to prevent this behavior? What is the name of the S3 redirect object, if any, that I need to point to? Or is there some other proper config, or is this just a bug in how Cloudfront and S3 interact that Amazon needs to fix?

It is possible to specify a Default Root Object of index.html, but it doesn't help any - it just changes the problem. The Cloudfront url instead redirects to /index.html on the main site, which is a 404 (we don't use an index.html file, it's a server-side framework driven site). I could put an index.html on the server, but that defeats the small speed gain of using Cloudfront in the first place.

One question asks something similar but gets back a blank, 0-byte response for some reason instead of what I'm seeing, an XML response. It doesn't include a question about that problem or a resolution.

One article proposes you just serve the entire site out on both the bare and www domain. This screws with any user's bookmarks, your search ranking, etc, etc. You should not do this.

Several discuss hosting a static website on S3 and Cloudfront rather than a redirect scheme, and so are unrelated.

So, how do I do this properly? 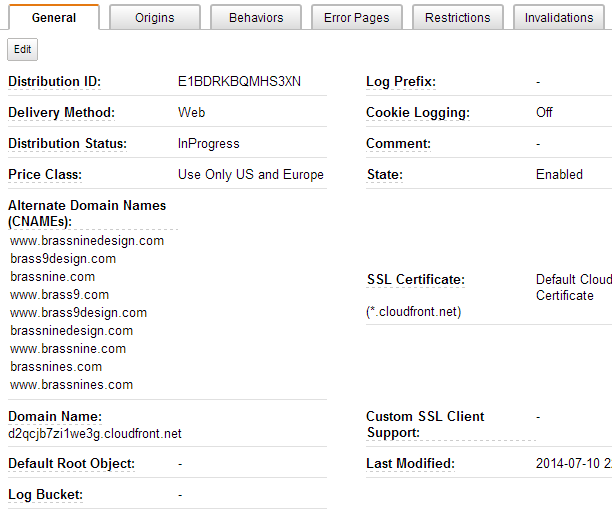 And the Origin config for that Distribution:

If you have this issue, check first when you configure the s3 bucket origin for the cloudfront, the autocomplete returns the s3 REST endpoint domain.amazonaws.com which return this ListBucketResult response.

You have to write down manually the website endpoint domain.s3-website-region.amazonaws.com

Important: If you have wrongly configured cloudfront with the REST endpoint you have to invalidate the cache through Invalidations or it will keep returning the REST response

Solution: Setup the Redirect as stated in the question then wait out the S3 and CloudFront cache times. They can be 4 hours or more, so you just have to set it all up then wait and hope for the best.

(This is Michael's solution from the Comments, but it's now been years and this really deserved to be marked as Answered).

If you don't want to specify a default root object when you create a distribution, include an empty DefaultRootObject element.

Not the answer you're looking for? Browse other questions tagged redirect amazon-s3 amazon-cloudfront or ask your own question.

6
AWS CloudFront Default Root Object and subdirectories
0
How do I enable redirection on a domain for an S3-hosted website with CloudFront in front of it?
6
Why is only index.html available from an S3 bucket served by CloudFront, and nothing else?
0
How do I limit S3 object access to CloudFront only?
0
Amazon CloudFront default SSL certificate for multiple domain names