How to wait for network in a batch script when booting on Windows Server?

I'm executing a batch file with TaskScheduler "At system startup" on a Windows Server 2012 in Azure, and I observed that there's no network for 20-60 seconds after the start of the batch. Currently I added a constant wait with ping, and it works most of the time, but sometimes not. Can you suggest me a more robust method to wait until the network is available? (for sending email and/or http requests)

You seem to be intent on using batch for this so here goes. You may want to run this by the guys at SO since they are better scripters than I am. In fact, I got the main logic from (https://stackoverflow.com/questions/21245545/ping-test-using-bat-file-trouble-with-errorlevel) complete with the reason why testing if a ping will go through with this method is prefereable to others.

Basically, it just pings at one second intervals, checks to see if a successful ping occurs. If so, it does whatever you're trying to script.

I did not hard code the IPaddress you want to check for basic ICMP connectivity for, but instead added it as a command line argument. Or you can just hard-code it.

You may want to double check the syntax as I did not test this at all.

Use the "Start only if this network connection is available" option. 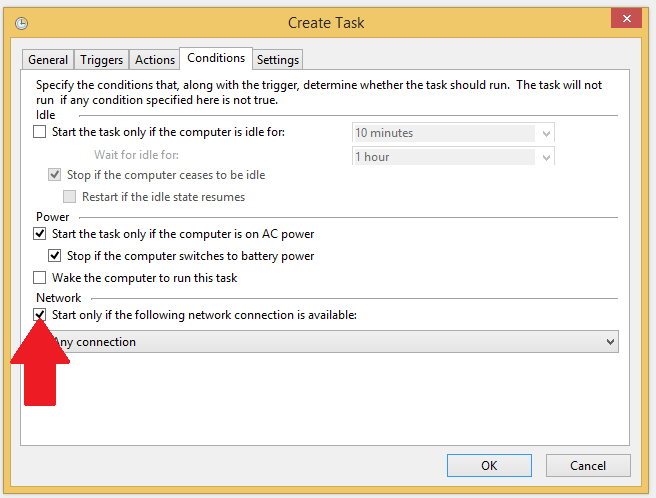 According to this answer on superuser, you can subscribe your scheduled task to the "network is available" event.
As long as you don't filter for a specific network, I think it should work.

549
How do I tell Git for Windows where to find my private RSA key?
64
How do you wait for an exe to complete in batch file?
2
POP3 traffic stalls between small bursts
0
When server is booting high load?
5
Enforce minimum wait time for network connection
1
Azure Linux VM name resolution
1
User logon PowerShell script not running under Windows 7 or 10