How can I place /tmp, /var, /opt, and /usr/local into a /data partition instead of the / partition?

I want to partition a CentOS 6.5 server that has 4 RAID VDs:

So that I can have the majority of the disk space as a single partition (/data). I want that large single partition to include /tmp, /var, /opt, and /usr/local. I want the / partition to include the rest of the operating system. The goal is to have the /data partition store volatile data (/tmp, /var, etc.) as well as user data and applications (/opt, /usr/local, /home, etc.) as either symbolic links (e.g., /tmp -> /data/tmp) or bind mounts (e.g., in /etc/fstab: /data/tmp /tmp none bind 0 0). I've considered partitioning such as: 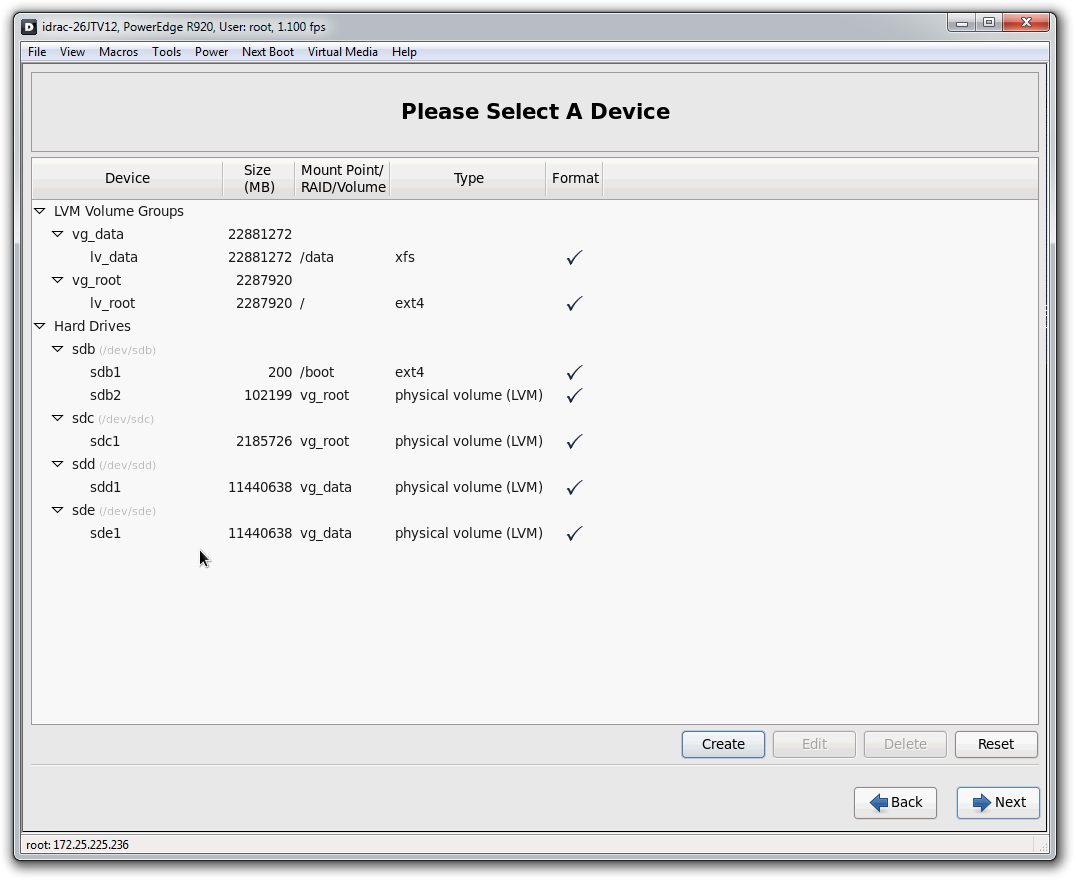 The default CentOS partitioning during installation always includes /tmp in the / filesystem. Please note: I do not want /tmp, /var, etc. as separate filesystems. Given my RAID configuration and disk sizes, I'm assuming that the /data partition would need to be an LVM xfs partition, right?

Can anyone tell me how I can accomplish this? I've tried booting as single user and making bind mounts above, but rebooting failed with problems viewing /var. Perhaps the symbolic linking approach would work, but at this point I'm hoping for some expert advice!

Based on your comments I would suggest:

Use your hardware RAID controller to create a mirrored (RAID 1) volume for the operating system. This volume should be designated as your boot drive in your BIOS settings. With many raid controllers/drivers this volume will then appear as /dev/sda to your CentOS system.

If the remaining drives are also connected to your RAID controller you can use that create a JBOD volume (no redundancy and 1 drive dying will destroy all data) which will appear as /dev/sdb. Otherwise the other drives simply appear as individual drives in to CentOS. These will be /dev/sdb /dev/sdc etc.

Note that, as you specified, /data will die a merciful quick death when only one of the component disks dies.

The trick here is assigning the remaining space of the boot disk to your data volume group as well, giving you maximum space there.

Now if your applications and users do not honour $TEMPDIR settings simply move /tmp to /data/tmp and create a symbolic link instead ln -s /data/tmp /tmp. The same with anything else you want to relocate.

Best to do that in post install section of a kickstart script, or in single user mode after you have completed your installation.

N.B. I can see a point to moving /var/tmp to /data/tmp as well but not to moving the whole of /var there. By design /data is your most unreliable storage and you intend to allow users and applications to completely fill that space too...

Not the answer you're looking for? Browse other questions tagged filesystems partition centos6.5 or ask your own question.