A console view of a Windows 2008 R2 VM, on vSphere is showing the following screen: 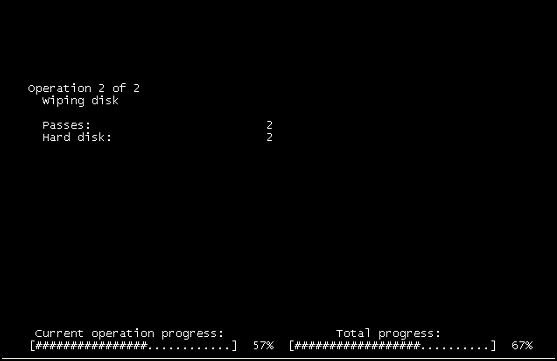 Can someone advise on what this program is?

Some information on this mystery:

A number of VMs are now effected. The symptom is after reboot "OS not found" message is appearing.

Unfortunately it looks like we may not get to the bottom of what the application was, but to get some value from this incident, I wanted to create a reference answer. This is VMware and virtual layer management centric. A lot of admins are in segregated, and cannot get guest or storage access quickly, and this is for them :)

http://support.seagate.com/kbimg/flash/laptop/Laptop.swf seems to be the closest match to an actual application, which @MosheKatz found.

If this happened in the future, the investigation should be follows like so:

At the end of the day, we knew and Virtual infrastructure tools would not have reported within a guest like the above was doing. We could see there was no ISO mounted, and no events logged against the VM. We could see the VM wasn't "hard power cycled", only a soft restart (this is invisible to underlying infrastructure). We knew it wasn't storage side as we had ruled that out already. We suspected it wasn't automated as it was happening over the course of a few hours on specific VMs. We guessed it wasn't malicious as why would the console report Disk Wipe if it was :)

So, the conclusion was a user initiated disk wipe. That's as far as my investigation went, but I hope you found it useful.

I think your issue is a standard VMware space reclamation feature.

This article may help you: Clearing up Space-Efficient Virtual Disk questions

Not the answer you're looking for? Browse other questions tagged windows-server-2008-r2 nfs vmware-vsphere hard-drive or ask your own question.