We put a 4 port Intel I340-T4 NIC in a FreeBSD 9.3 server1 and configured it for link aggregation in LACP mode in an attempt to decrease the time it takes to mirror 8 to 16 TiB of data from a master file server to 2-4 clones in parallel. We were expecting to get up to 4 Gbit/sec aggregate bandwidth, but no matter what we've tried, it never comes out faster than 1 Gbit/sec aggregate.2

We're using iperf3 to test this on a quiescent LAN.3 The first instance nearly hits a gigabit, as expected, but when we start a second one in parallel, the two clients drop in speed to roughly ½ Gbit/sec. Adding a third client drops all three clients' speeds to ~⅓ Gbit/sec, and so on.

We've taken care in setting up the iperf3 tests that traffic from all four test clients comes into the central switch on different ports: 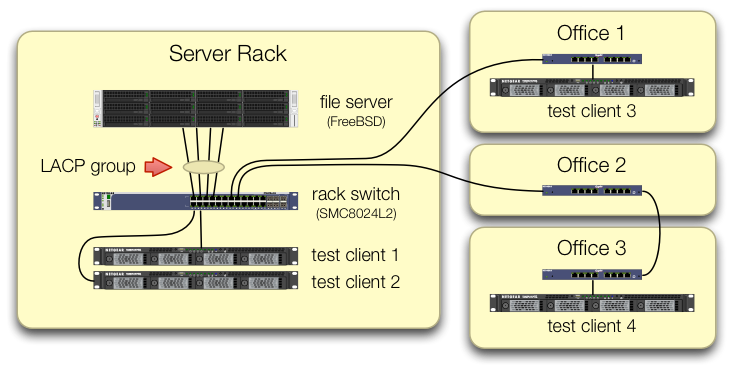 We've verified that each test machine has an independent path back to the rack switch and that the file server, its NIC, and the switch all have the bandwidth to pull this off by breaking up the lagg0 group and assigning a separate IP address to each of the four interfaces on this Intel network card. In that configuration, we did achieve ~4 Gbit/sec aggregate bandwidth.

When we started down this path, we were doing this with an old SMC8024L2 managed switch. (PDF datasheet, 1.3 MB.) It wasn't the highest-end switch of its day, but it's supposed to be able to do this. We thought the switch might be at fault, due to its age, but upgrading to a much more capable HP 2530-24G did not change the symptom.

The HP 2530-24G switch claims the four ports in question are indeed configured as a dynamic LACP trunk:

We've verified that all four NIC ports are getting traffic on the FreeBSD side with:

Oddly, tshark shows that in the case of just one client, the switch splits the 1 Gbit/sec stream over two ports, apparently ping-ponging between them. (Both the SMC and HP switches showed this behavior.)

Since the clients' aggregate bandwidth only comes together in a single place — at the switch in the server's rack — only that switch is configured for LACP.

It doesn't matter which client we start first, or which order we start them in.

ifconfig lagg0 on the FreeBSD side says:

We've applied as much of the advice in the FreeBSD network tuning guide as makes sense to our situation. (Much of it is irrelevant, such as the stuff about increasing max FDs.)

We've tried turning off TCP segmentation offloading, with no change in the results.

We do not have a second 4-port server NIC to set up a second test. Because of the successful test with 4 separate interfaces, we're going on the assumption that none of the hardware is damaged.3

We see these paths forward, none of them appealing:

What is the load balancing algorithm in use on both the system and the switch?

All my experience with this is on Linux and Cisco, not FreeBSD and SMC, but the same theory still applies.

The default load balancing mode on the Linux bonding driver's LACP mode, and on older Cisco switches like the 2950, is to balance based on MAC address only.

This means if all your traffic is going from one system (file server) to one other MAC (either a default gateway or a Switched Virtual Interface on the switch) then the source and destination MAC will be the same, so only one slave will ever be used.

From your diagram it doesn't look like you're sending traffic to a default gateway, but I'm not sure if the test servers are in 10.0.0.0/24, or if the test systems are in other subnets and being routed via a Layer 3 interface on the switch.

If you are routing on the switch, there's your answer.

The solution to this is to use a different load balancing algorithm.

Again I don't have experience with BSD or SMC, but Linux and Cisco can balance either based on L3 information (IP address) or L4 information (port number).

As each of your test systems must have a different IP, try balancing based on L3 information. If that still doesn't work, change a few IPs around and see if you change the load balancing pattern.

Not the answer you're looking for? Browse other questions tagged freebsd bandwidth bonding lacp or ask your own question.