Can a Sun rack be converted to a normal rack?

Does there exist Sun rails so standard servers can be put in it?

Or perhaps those L-shelves, where you lay the servers on the the L-shelves?

The reason I am asking is because since the rack was put in place, a cooling pipe have been mounted on the wall, which prevents the rack from being pulled out. If I should remove it, then it would have to be sawed in two.

Right now I have left the old Sun servers in the rack powered off, just to separate the hot and cold room.

So either I can let it stay as it is, and not be able to use the rack, or saw it over, and then have to find something to cover the hole where the rack was. I would prefer to be able to put normal servers in it.

Just don't use the Sun rack!! It really can't be converted.

Starting a new project with a round-hole non-standard rack today is irresponsible.

A more comprehensive description of rack types and features is available at:

What to look for in a server rack?

The EIA-310 standard does have provision for round holed racks, however the Server industry has pretty much stopped supporting them. Square holed racks are far easier to build for and are much more tolerant of slight variances in rail build. Thus, for vendors who have to sell into a market where buyers can have racks from any of a hundred suppliers it makes rail-engineering a lot easier.

Which is to say, it can be done. However, you will have to source rack-rails that fit your equipment and support round holes.

It's probably easier to just not use that old rack.

I've had to do exactly this to reuse an old Nova rack from the 70s that had round holes.

First I tried clip-on cage nuts intended for round holes. These worked okay but have a fairly low maximum load. So okay for small switches but not servers.

From Left, two rivnuts, uncompressed. Two clip-on cage nuts, with bolts. Then two slip threads (only had one spare) and last a common square cagenut for comparison. 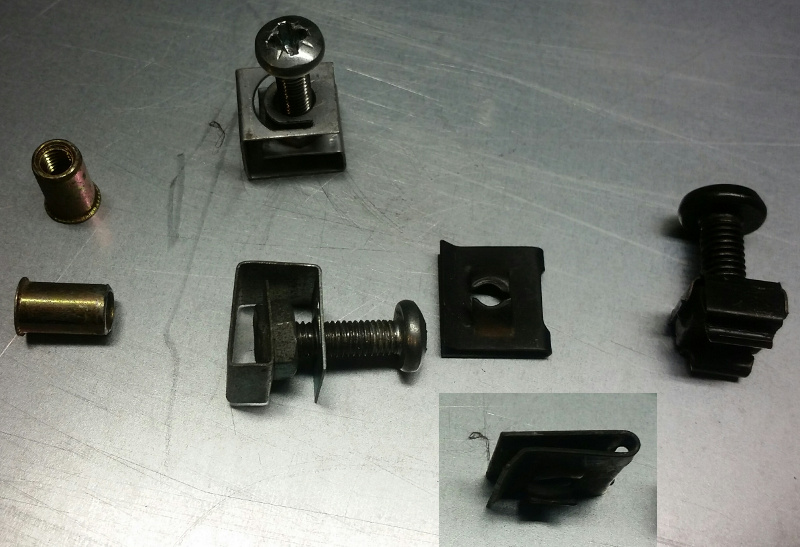 Second I tried Rivnuts, which kinda worked but were too large or too small. I could have drilled out the rack holes to take the larger rivnuts, but they were expensive, and would have obstructed other rail systems from going home properly if I changed the rack content.

Likewise I thought about cutting square holes instead of round, but a quick test on a scrap of metal convinced me that was going to be a painfull lot of work for minimum gain.

Finally I used a combination of 1/4" bolts and nuts for rackmount items, and used some HP servers whose rails are designed to clip into round or square holes.

Two switches held in by bolts. 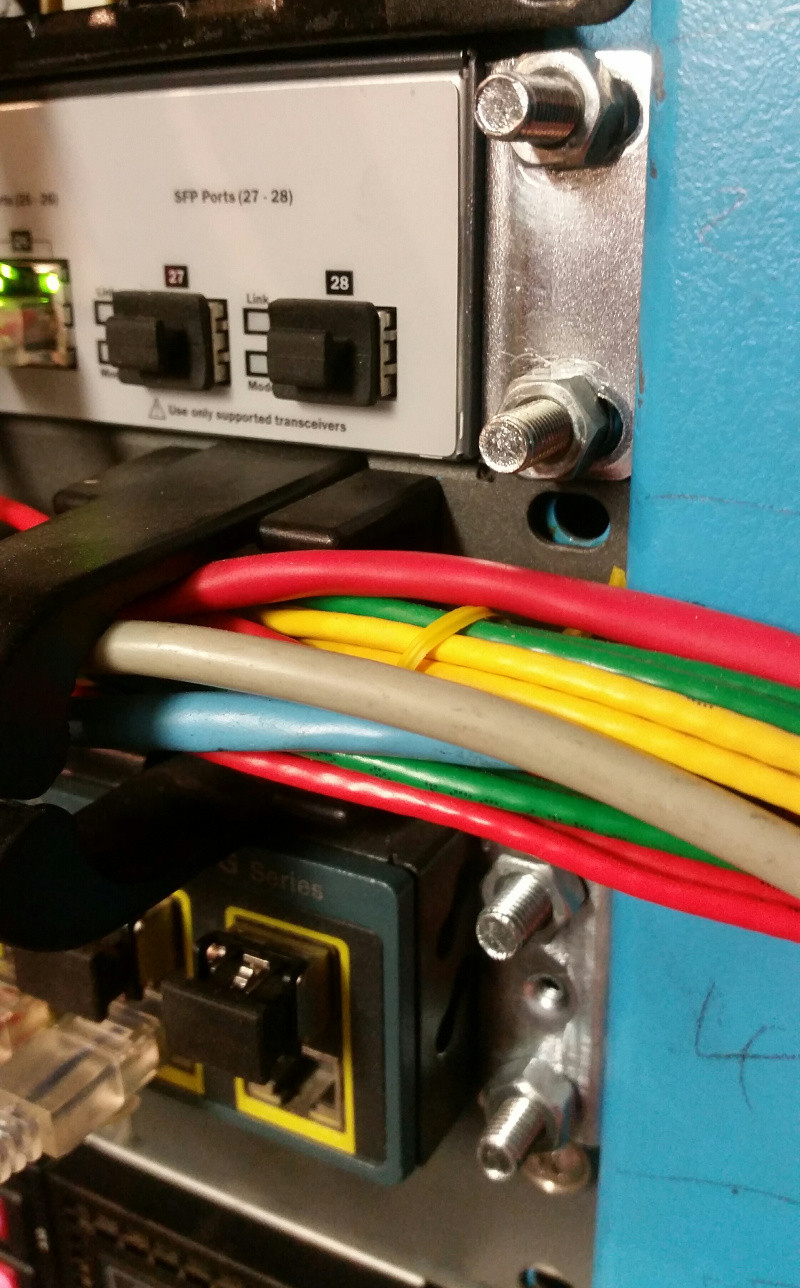 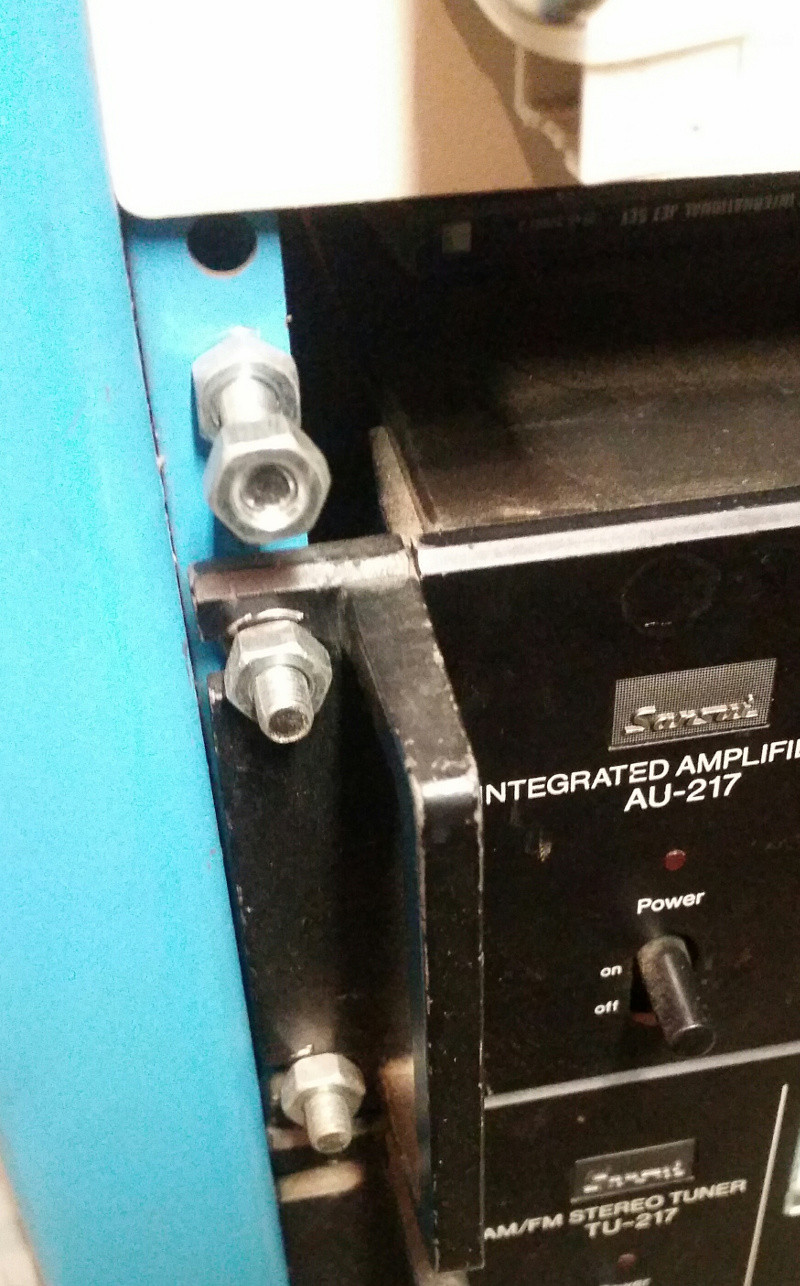 Close up of a spare bolt 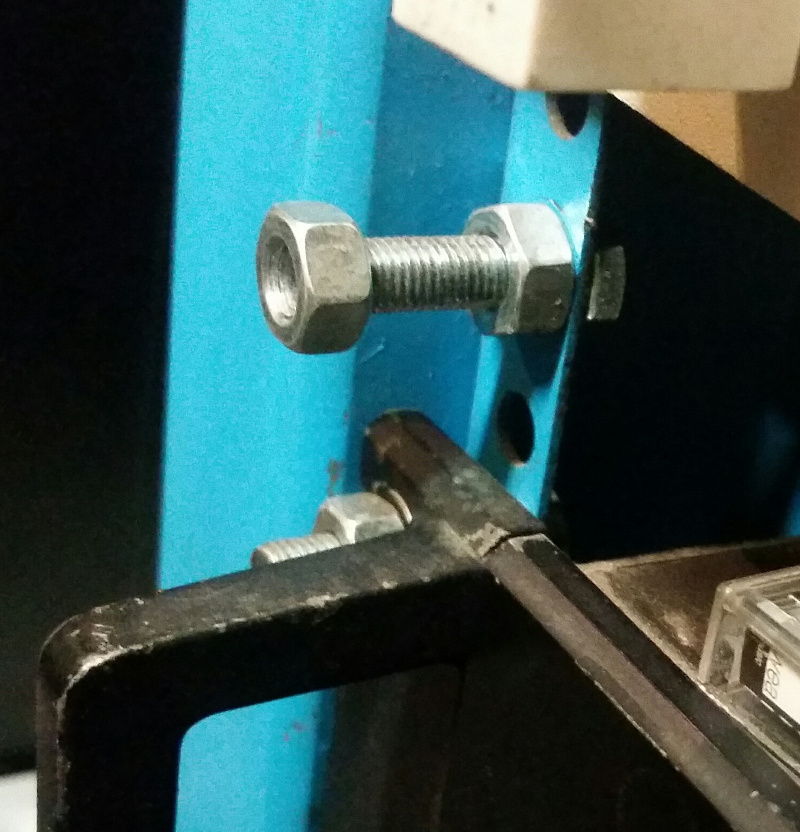 In theory I should have used a washer under the last nut, to spread the load over the equipment. In practice this hasn't been needed.

I should have used a much thinner first nut (the one holding the bolt in the rack, between the rack and the equipment) but locknuts were bonkers-expensive compared to normal ones - 12x the price.

Downside - you need a spanner or a tool to cinch the nut down tight and undo it. The ideal tool would be a deep nut driver on a screwdriver.

You could use wingnuts instead, but they run the risk of fouling on something. Super-deep nuts would help too, but they're not cheap.

37
What to look for in a server rack?

7
Server Cabinet/Room Cooling
1
Storage Chassis Rack Location
8
Server Rack vs. Server in PC "Towers"
37
What to look for in a server rack?
0
A backup system alone: tower or rack chasis?
5
Water-Cooled Rack Door: does it work well with Blades or GPU nodes?
2
Generic rails and terminology when specifying rack rail types and dimensions?
4
Interconnecting options for server rack and network rack?
1
In a 42U server rack with 12 very hot 2U-nodes, what is a good configuration? All nodes at the top or bottom?
0
Cooling Solution for CCTV Rack