GPO is both applied AND filtered out

I have a GPO that is applied to MyUser's OU and filtered to MyUser. I run a gpupdate on his machine and I see that the GPO is listed under "Applied Group Policy Objects", yet it is also listed under "The following GPOs were not applied because they were filtered out" as Not Applied (unknown reason).

I've checked and it appears that the GPO is not working.

How could it be that the GPO is both applied and filtered out?

I was getting this error:

I discovered that the actual GPO was disabled on the domain controller! 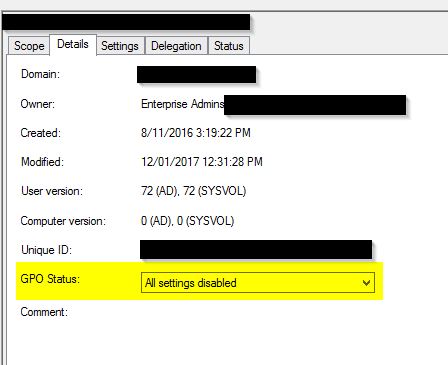 Over the years, I've seen this admittedly rare issue come up in a handful of Group Policy discussion forums. As somewhat of a Group Policy aficionado, it intrigued me, however until recently I had never had the opportunity to troubleshoot the issue directly. Last week, however, I witnessed it occur in my environment and had a chance to investigate further. I was able to resolve the issue, although I'm not precisely sure how, so I'm going to post my findings in the hopes that it helps the next person who comes across this issue.

In this instance, a single policy object exhibited this behavior, and only on one workstation. The policy in question uses GPP Drive Maps and maps network drives for all of the users in my environment, and suddenly stopped mapping them for one user. The policy had experienced no changes for at least a year, and the workstation had no changes that I am aware of for about a month. There were no other recent changes that I feel were connected to the issue.

This particular problem produces a number of symptoms. Namely: 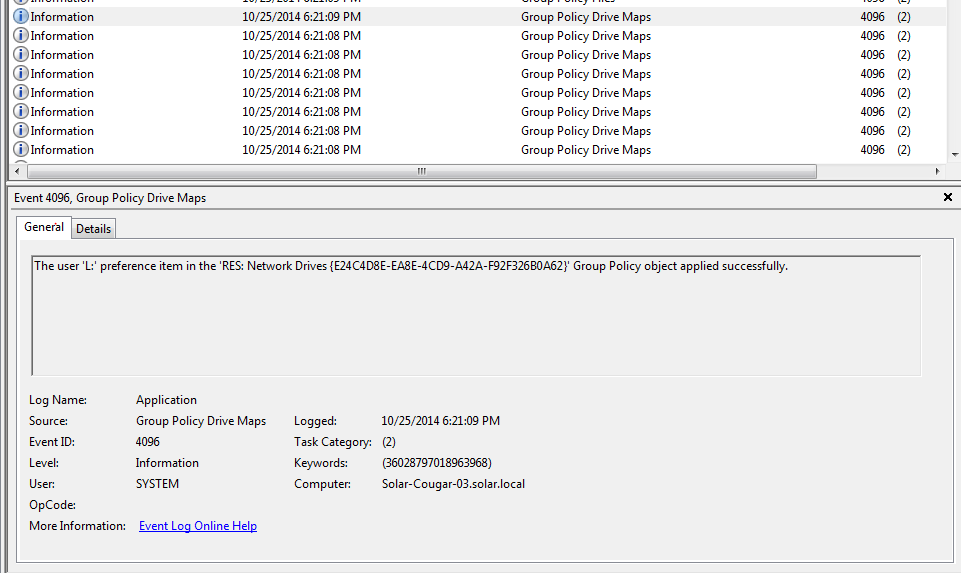 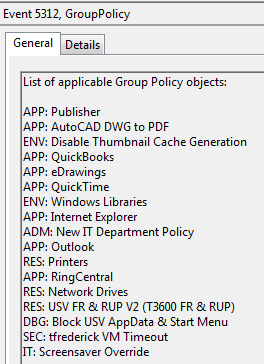 Following these events, the operational log should list each GPP extension (drive maps, registry, files, etc.) and all of the objects that contain any policy of that class. In this case, there was simply no entry for Drive Maps, almost as if the extension didn't execute at all. My theory is that the extension itself is running into some kind of trouble. If there was an issue retrieving the objects, it wouldn't be downloaded successfully. If there was something in the object that was crashing the extension, it would be logged in the GPP debug logs. If there was a general problem with the GPP extensions, none of the others would run successfully. It's recorded in the GPResult output as applied because it's assigned to the extension to be processed, but filtered with "Unknown Reason" because the extension either never runs or crashes immediately upon running. I have the feeling that if I had had more policy objects containing drive maps, they would have failed as well, however I didn't get a chance to test this.

This issue seemed to resolve itself when I cleared the GPP Operational event log. I'm not sure if this was the actual solution, or if it was just a coincidence. If this helps anyone, please let me know.

We had a similar issue, with GP not being applied to a few computers (when they should be), and gpresult /R gave us a Not applied (unknown reason) response.

We didn't have a problem with the secure channel or time services. Turns out another admin had moved the IP address of a DC (and correctly updated all DHCP scope options and statically defined IPs).

The fix for our issue was simply to flush the local DNS Cache and the DNS server caches and then re-apply the GP with GPUpdate /force.

Hope this helps someone.

This may be very unhelpful, but will share my experience, in case it helps.

I was getting the same problem as the poster, but I was doing testing at the time:

So when doing a gpresult, it appeared like the GPOs were both applying and not applying, but of course they were, it was just that the GPOs not applying via blocked inheritance had the same name, and confused matters.

So the moral is, check you don't have the problem GPO applying more than once (and that one of the linked GPOs is not being blocked by blocked inheritance.

Not the answer you're looking for? Browse other questions tagged group-policy or ask your own question.

2
Why Isn't My GPO Being Applied?
2
GPO shows as being applied but the settings were not implemented
0
GPO folder redirection - creates .tmp files
0
I’m having fundamental issue with Computer Group Policy Objects working but not showing as applied in gpresult
0
GPO shows applied under user settings, but contains only computer settings
2
Local GPO vs DC applied GPO
2
GPO Password Policy Only Partially Applied