How do I give a program permission to change the system time in windows 7?

I have a some software which requires that the windows system time be synchronized with a physical atomic clock* before a certain procedure begins.

Right now the user has instructions to modify the time using timedate.cpl before they begin.

I would like to display an hour and minute input box and allow the user to click a button when the times match just as you would do if you were starting a countdown. This makes it easier to extract the time as soon as they click on my button. To achieve this I would like to run a system command like this:

However, when I test this it asks me for a password.

I would like to know if there some way give my program the just the right to set the time without needing to type a password everytime?

* Atomic clocks are suitable because the time does not drift much over a long period of time. Precision is not a factor. Until now operators actually write the time on a piece of paper before starting a step.

You don't specify whether these machines are part of an Active Directory domain or not. I'll assume that they are not.

You don't specify what version of Windows you're running. The pre-Vista and post-Vista cataclysm is huge. It's practically an entirely different operating system. You can't just say "Windows" since Windows has changed a lot in its 20+ year history. I'll assume something Vista or above.

In the example you gave above, you are trying to run a program as Administrator, and to do that, you must supply the password for Administrator. There is not a direct equivalent of sudo in Windows. There does not exist a good way to embed Administrator credentials in the script or obfuscate them in some way that does not dangerously risk exposing the password to the standard user.

You would use either Group Policy or Local Computer Policy (secpol.msc) to delegate this right to a user. Any user (or group of users) you like. 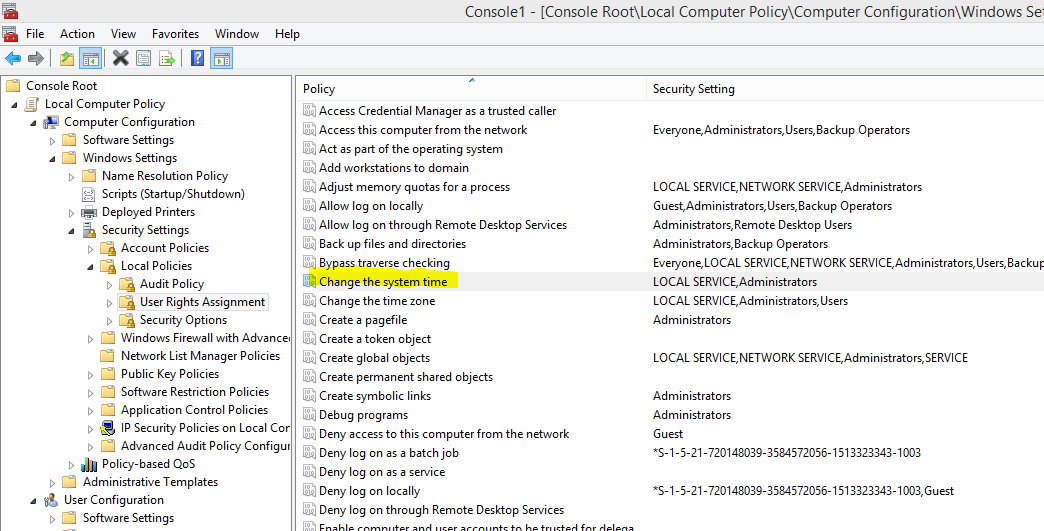 The technical name of the privilege is the SeSystemtimePrivilege user right.

NTRights.exe -u JoeBlow +r SeSystemtimePrivilege from the 2003 Resource Kit basically does the same thing as adding the user to the "Change the system time" list in secpol.msc, and you'll still get the A required privilege is not held by the client error. Even if you disable UAC, you still get the error. Keep in mind that the security token of a user is only calculated once at logon, so if you make changes that user's security token, they need to log off and back on again for the changes to take effect. But it doesn't matter - still it will not allow you to change the system time without elevating.

At this point, I would consider doing something like writing a Windows service or a scheduled task that ran as Local System that a standard user could interact with in some way that would manipulate the system time. It's pretty apparent that Windows didn't want standard user's screwing around with the system time.

Not the answer you're looking for? Browse other questions tagged windows batch-file or ask your own question.

538
How do you find what process is holding a file open in Windows?
1
Preventing a program from opening
497
How do I tell Git for Windows where to find my private RSA key?
0
Restricting Access to Application(s) on Point of Sale system
1
Run Active Directory Admin Center as another user
7
Windows Updates taking a long time to install
1
How to investigate intermittent Windows Server “logon failure” problems?