On a fresh domain-joined Server 2012 R2 install I see a peculiarity where an enabled "Remote Desktop" rule is set to Block in the Domain profile:

Contrary to what the Rule Source column (the first column in the screenshot above) is telling me, the rule is not defined in the machine's local policy: 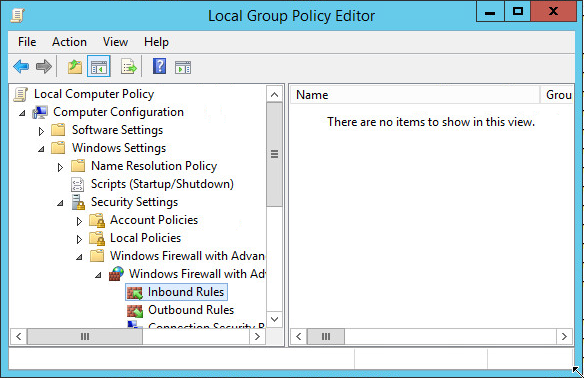 Folks seem to have encountered this problem on older (Windows 7 / 2008 R2) installs as well, yet there seems to be no effective resolution documented in these cases.

So where does this come from and how to disable this block rule?

I had the same issue and found it was due to a space in the GPO comma delimited list. I documented this on my blog:

Try using the initial configuration tasks wizard to enable RDP access. It should the eighth option down. I believe Microsoft designed this to override Group Policy or any other settings so the system wouldn't automatically expose any ports/services (i.e. from GP rules) until all updates had a chance to be applied following a new install.

Have you tried looking in the network connections folder on your local gpo editor? It sounds like you might have have the remote desktop disabled from there...