Windows Software RAID with Bad Sector: Which drive is broken?

We have three Seagate drives in a Windows software RAID stripe arrangement. The server began to freeze up. I was running two backups simultaneously with Acronis and BackupChain and thought I overloaded the system, but wasn't the first time; it ran fine like that earlier. But then everything got stuck including the mouse so we panicked.

A colleague recommended to check the disks so we ran a chkdsk /b over night. It says it fixed a bunch of bad sectors but now I'm stuck because I don't know which drive is broken!

I then downloaded SeaTools for Windows and ran a generic test but it didn't find anything. Could it be the SeaTools check is now skipping those sectors because chkdsk already marked them? At the very least it would be great to know which drive was causing the freeze-up so we could potentially replace it. Naturally I need to figure out if files were damaged or lost, good luck to me!

I think to properly check the drives you'll need to separate them (meaning breaking the RAID), since this is RAID 0 and each one holds only part of the partition.

You might want to try some utilities like HDDScan that says it can perform scans on RAID-configured drives - I've received good reviews on this utility, but haven't tried it myself.

If the utility fails to diagnose (or you prefer not to try it blindly), then backup your data, break the RAID configuration, reformat the drives and run chkdsk /b on each one separately.

As for the data itself, you might be able to determine the damaged files (if you haven't broke the RAID), but I can give only a direction rather then a full solution.
Since this is RAID 0 then each drive holds part of each file, so if you've identified the bad drive and the bad sectors you might be able to correlate it with the files location on the drive.
There even might be some utility that can automate this task, but I'm familiar with one.

Also, you might want to read this article to better understand bitrot in RAID configurations.

I'm a Windows Software RAID-5 user myself and had similar problems in the past.

I ended up writing a nifty and free utility called Hard Disk Validator that helps me to determine whether the sector is bad because the disk is failing or it's just a result of a recent power failure. Conveniently, the serial number of each disk is shown. You're welcome to check it out here. 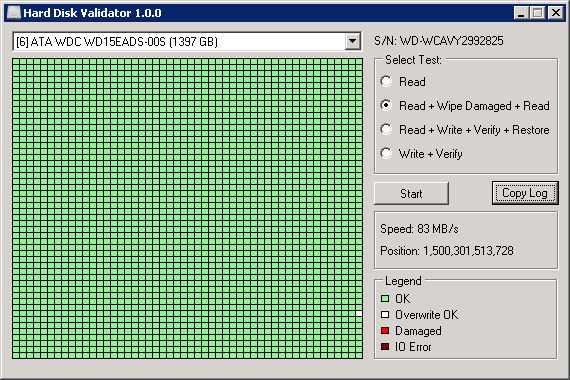 This is my hard drive after wiping out a bad sector that was created during a power failure, this bad sector prevented Windows from rebuilding my RAID-5 array.

Not the answer you're looking for? Browse other questions tagged hard-drive or ask your own question.

5
Hard drive partitioning software for Windows
4
HP Onboard Software SATA RAID. Knowing which drive failed
4
Hard Disk Bad Sector/Fault Analysis Tool
0
Accessing a broken mdadm raid
1
What can I do about the 2 SATA harddrives no longer showing up even in BIOS?
7
Poor Linux software RAID 5 performance with NCQ
0
Which HDD I can replace WDC WD20EARS with in the software RAID?
1
Recover ext3 files from hard disk with bad sector
0
clone nvme drive with 4096 sector size to ssd with 512 sector size
3
Wiping Bitlocker Drive Key Sector