Office 365 - what is in the "Sensitive Word List" for spam filtering?

In Office 365 you can toggle a few settings to help with spam email filtering.

Among these is a setting to enable a "Sensitive Word List" as shown below: 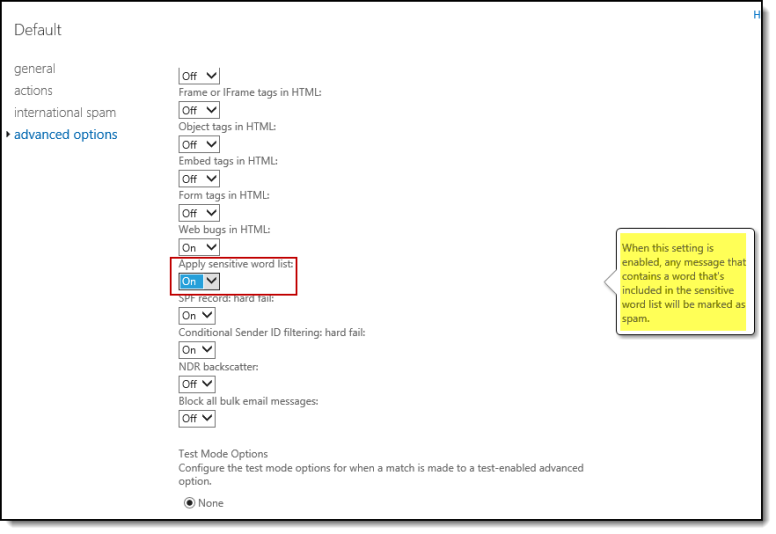 The problem is...I can't find any list on Technet or elsewhere online showing what this list actually contains. It isn't editable, and isn't accessible via Exchange Online's Powershell either.

I even ventured the thought that this list was carry over from Forefront but still can't find an actual list.

So...does anyone actually know what is included in this list?

OK, so after going round and round with Microsoft support on this, I was transferred to someone that was at least willing to help. The first 2 techs stated the list was for "internal use only", but the third person explained that while it is true they don't have access to the actual list, they do state that it was derived from the same sensitive words list used for Forefront for Exchange and FOPE (Forefront Online Protection for Exchange) back in the day.

So, here's a list of EXAMPLES that a tech at Microsoft was willing to share. NOTE that it isn't the entire list, only a small subset of examples. I'm also told that it isn't case sensitive and that variations of spellings are also accounted for.

PLEASE NOTE, PER SE STAFF RULES/GUIDANCE THAT THIS LIST IS NSFW. WHILE HOSTED ON PASTEBIN WHICH IS A PERFECTLY ACCEPTABLE SITE AND IS ONLY TEXT, NOTE THAT THE EXAMPLES GIVEN ARE COMPLETELY NSFW...YOU'VE BEEN WARNED.

EDIT (NSFW): Possibly the full FOPE list from back in the day: http://pastebin.com/cKMQFRwU

Hopefully this helps others like myself in properly testing out the sensitive words list properly after enabling it withing Office 365 / Exchange Online.

Microsoft. Microsoft knows what's on the list. They don't publish it. You could open a PSS ticket and ask - have you tried that? Your O365 dashboard makes it easy to open a non-criticals support ticket.

Also - even though it's not editable, you can make a transport rule yourself to exempt certain words from being blocked, if you find that to be a problem.

Not the answer you're looking for? Browse other questions tagged spam exchange-2013 microsoft-office-365 or ask your own question.