We have Windows Server 2012R2 Essentials in a small office. Having stubborn and uneducated users who refuse to place their files anywhere else but on their desktops I've decided to look into folder redirection.

After setting it up in Dashboard following a simple enough wizard everything started working couple of days later.

However, in some dark corner on 100Mb/s crappy switch there is a computer running Windows 7 Pro that messed up it's outlook data file during transfer to redirected folder on the server.

I figured I simply pull it from latest backup and replace the corrupted one, but I guessed wrong. Only available backup is after redirection took place. On a server dashboard I can see all backups for the computer, but I can't access it on server - it says it needs to be done from client computer. When I do go back to client and start Launchpad and click backup, no backup prior to folder redirection is available.

I've looked around the internet, but most(well all) of the things I ran into are dealing with simple backup/restore scenarios when everything is running as expected.

I also tried calling Microsoft, but they basically told me "Yeah, well what are you gonna do...", call Dell.

I called Dell then and got the answer that this is OS thing and they can't help me.

So here I am now, is there any way to access earlier backups, before folder redirection?

Here is how the server dashboard for the client looks like, note that you can see backups for roughly past 3 months: 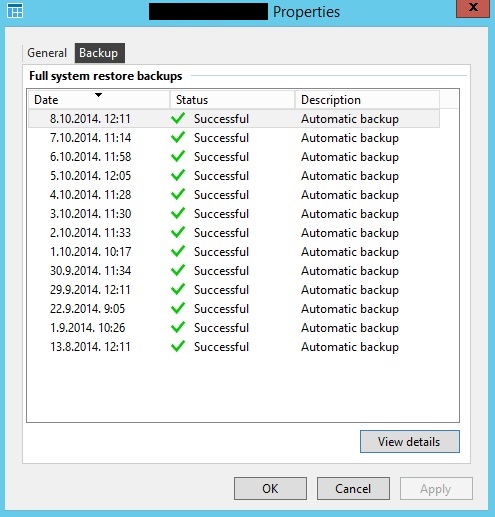 And as said before, when I try to restore files from server dashboard it tells me to go to client computer and do it from there, this is the client launchpad: 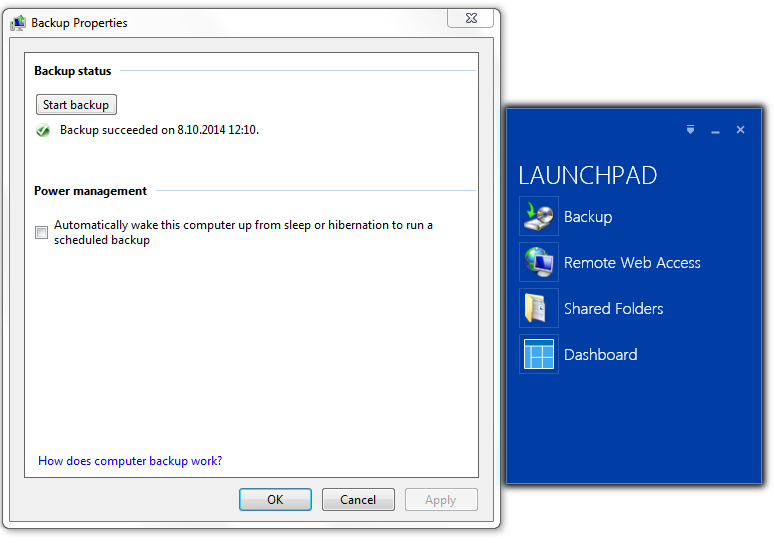 It should list all backups available from the server, but it only shows those created after the computer pulled group policy to start redirecting folders. This is what happens to all clients after they start redirecting, so I guessed this is how it's meant to be done but it didn't make sense to me not to be able to access previous backups.

Next thing I tried is using "Previous Versions" on Users folder, but as expected I can only find versions after redirection. I expected this to happen because even tho user can't see any difference, the path to their user folder changed, it was c:\Users\Username and now its \SERVER\FolderReddirection\Username

So my next order of business was creating a USB recovery drive and trying to restore on a virtual machine and see what happens. Again, following FULL RESTORE WIZARD (not backup restore it suggested I do on a client, but the one you use when your hard drive crashes and you replace it) on the server I've created a bootable drive and started recovery. It downloaded pre-install environment automatically and brew up USB repair disk. Virtual machine failed to start as the hardware is too different.

After this I stopped doing anything, went trough documentation one more time and realized my mistake. I misinterpreted "Client Dashboard" as "Client Launchpad", and this is not the same thing. Looking back I guess I stressed out over this whole situation and English not being my native language I managed to misinterpret Microsoft support site.

What it turns out what you need to do is start "Launchpad" and then "Dashboard" from client computer as a remote app, log in as server administrator and do the same thing you tried to do on the server. Right click and select "restore files and folders for the computer" and you will be presented with all your backups instead of being told to go do it on the client computer (because you are already there).

I do test files in the backup from time to time to make sure everything is working, but the way I did that is by using "Previous Versions" not "Dashboard", so when the path to user folders changed I was unable to do anything.

In the comments I also noticed that .pst files should not be redirected to network shares and yes Microsoft says it is not the best option. By default Office 2013 puts your .pst in %system drive%\Users\Username\Documents\Outlook and Windows Server redirects Documents by default?

For anyone else out there tripping up the way I did here is what to do. I urge you to read trough my question to see where the problem was so you can prevent that kind of thing from happening in the future.