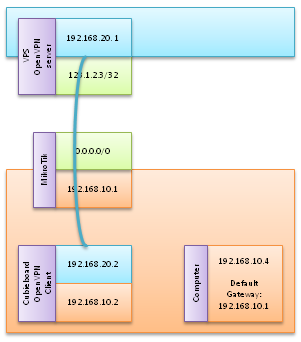 The computer's subnet also contains a SBC 192.168.10.2 configured to be an OpenVPN client connected to the beforementioned server. IPv4 forwarding is enabled on that SBC.

The default gateway of the computer is set to the network's router, which is running RouterOS on 192.168.10.1.

If I change the default gateway of the computer to 192.168.10.2, that is, to the SBC, then the connections get established immediately.

Also, any connection from the SBC to the VPS get established immediately.

If I change back the default gateway to the RouterOS device, and create a SNAT masquerading rule on this device for destinations in 192.168.20.0/24, then connections get established fast on the computer, probably only because RouterOS is impersonating the computer.

How can I route to the VPS without a SNAT, and without that 9 second delay? What is causing that 9 seconds delay?

Now I've noticed that without SNAT certain devices are able to route correctly, that is, access a server on the VPS, without having that delay. All Linux boxes in the computer's subnet don't have problems with the routing, but most noticeable are Windows boxes, which sometimes do work, some never, some occasionally, depending on if another machine is online or not, then only not for a while. There's no clear pattern to me.

Browse other questions tagged routing openvpn gateway routeros or ask your own question.

2
OpenVPN redirect-gateway breaks other tunnels
0
OpenVPN-Connection as default gateway for another host in the same subnet
0
pptp gateway with ssh access
0
Routing all traffic from a client with changing local subnet over VPN
1
Keep openvpn connected during change in default route interface
0
Openvpn problems with route-nopull
0
OpenVPN connect to vpn client from private network
0
How can I add (not replace!) a default route upon OpenVPN connection?
1
Windows Server 2012 uses default gateway ignoring more specific routes through openvpn interface
0
NATing w/ iptables + OpenVPN without impacting the host