I recently lost the disk descriptor file on a .vmdk file. The .vmdk was not the boot drive rather a secondary hard drive (sql database unfortunately), I followed the procedure here to rebuild the descriptor successfully. I then attached the drive back to the guest however it is coming up in the disk manager as an uninitialized drive. Is there a way to mount (perhaps in another os) it without formatting or does this mean that the data on the drive has been wiped out ?

@ewwhite The error seamed to occur when the VM was powered off and the name was changed (which was set to propagate through to the vmdk vmx files). I then tryed to start it and it couldn't find the disk at which point I noticed the descriptor was gone.

Disk 2 was the previous store for SQL Databases (Including vCenter). 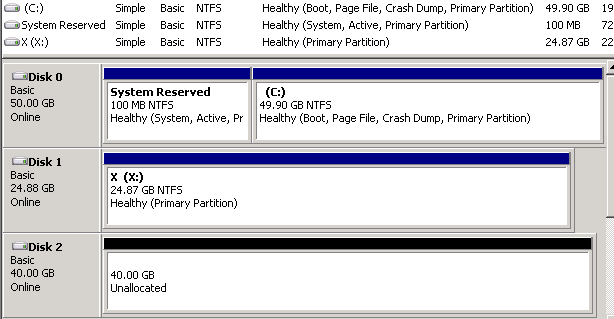 I am in the process of trying to mount the drive locally in windows 7 however it times out. At this point I'm think the issue is because the vmdk was created with a para virtual iscsi controller. I tried rebuilding the descriptor with both Lsi and pvscsi and have been unsuccessful wither way.

I was able to recover the data out of the file with the following steps:

This is very counter intuitive considering I was using Paravirtual Iscsi Controller and Lazy Provisioning. However I was able to recover the DB files run DBCC successfully. Hope it helps someone.

Not the answer you're looking for? Browse other questions tagged windows-server-2008 vmware-esxi or ask your own question.

29
Is there a way to clone an existing VM on an ESXi server without having to re-import it?
0
How to attach existing VMFS disks to VMWare ESXi
0
Windows 2008 VM won't boot with 1TB vmdk attached
0
Windows Server 2008 Formatting System Partition
2
v2v of RHEL5 box - issues with retaining MAC address
1
Can I attach iSCSI to VMware ESXi without licensing?
1
ESXi 5 Add an existing lun to datastore without formatting
0
How Do I Remove Files Stored In a VMDK?
1
Does ESXI Require New Drives Be Part of a Datastore to be seen by Virtual Hosts?
3
Downloading vmdk from ESXi without stopping the virtual machine