Now I'm planning out what to do if our server room is damaged in a disaster. The plan is to have a single, fairly powerful, server waiting at another location to restore to. The locations are connected by a 50mbit connection.

If we have some warning, I'd like to migrate the virtual machines between locations. If not, we'll be restoring from off-site backups.

Here's the problem: None of Dell's new servers have AMD processors. Mixing AMD and Intel processors isn't ideal, but it's not in my budget to throw out the AMD servers - and since AMD servers seem to be being phased out, I don't want to be stuck buying older servers.

I know you can't do live migration between AMD and Intel processors. But can you do it while the virtual machine is powered off?

There are a few scenarios where I don't know if I will run into problems:

You should not experience any problems moving between different processor types in a scenario where you stop and start the VM. (Such as an export and import.)

If these are cluster nodes and the cluster nodes had different types of processors in them, and you wanted to move (but still not live migrate) the VM from one node to the other, you'd need to boot the VM in "Processor Compatibility" mode. 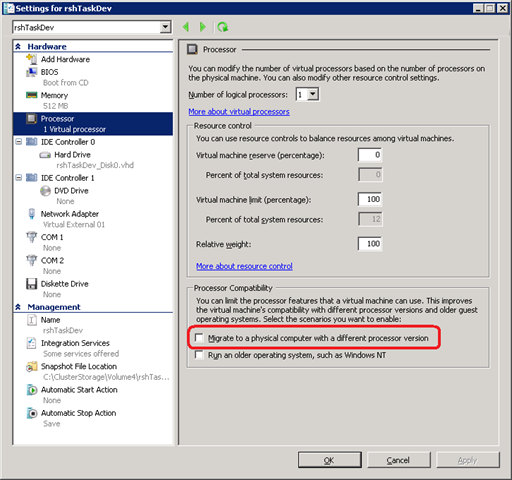 But despite what it sounds like, "Processor Compatibility" mode still will not allow you to live migrate across machines with different processor types.

Not the answer you're looking for? Browse other questions tagged hyper-v central-processing-unit live-migration or ask your own question.

7
Is it possible to cause artificial network packet loss or latency?
2
KVM live migration between Intel and AMD processors
1
Other than KVM, does any hypervisor support live migration between AMD and Intel servers?
2
Difference between Intel-VT and AMD-V
3
Hyper-V virtual machine can't be migrated to a specific host in the cluster
2
AES processor instruction in Hyper-V (Windows Server 2012) preventing live migrations
1
Is it possible to Migrate Live VMs from a Windows 2012 Hyper-V Cluster to a different 2012 R2 Cluster?
1
Move-VMStorage failing with error 0x80070005
2
Migrating VMs from hyper-v server 2012 r2 to windows server 2016
0
Identical Processor - Live Migration Error