What's the maximum number of IPs a DNS A record can have?

I have a strange idea - let multiple people/organizations host the same application, and let all their nodes be accessible via a single domain name. That's in order to have, let's say, a really distributed social network, where usability is not sacrificed (i.e. users don't have to remember different provider urls and then when one provider goes down, switch to another one)

To achieve that, I thought a DNS record with multiple IPs can be used.

So, how many IPs can a single DNS A record hold? This answer says it's around 30, but the usecase there is different. For the above scenario I wouldn't care if a given ISP caches only 30, as long as another ISP caches another 30, and so on.

Disclaimer: No offense, but this is a really bad idea. I do not recommend that anyone do this in real life.

But if you give a bored IT guy a lab, funny things will happen!

For this experiment, I used a Microsoft DNS server running on Server 2012 R2. Because of the complications of hosting a DNS zone in Active Directory, I created a new primary zone named testing.com that is not AD-integrated. 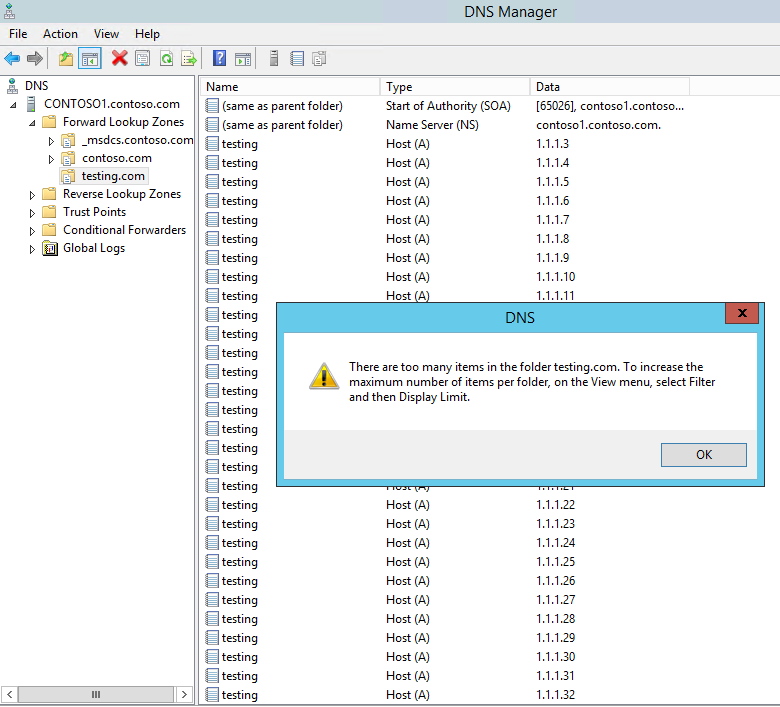 So I think it's safe to say that there's no practical limit to the number of A records you can add to a zone for the same name with different IPs on your server.

But will it actually work from a client's perspective?

Here is what I get from my client as viewed by Wireshark:

(Open the image in a new browser tab for full size.) 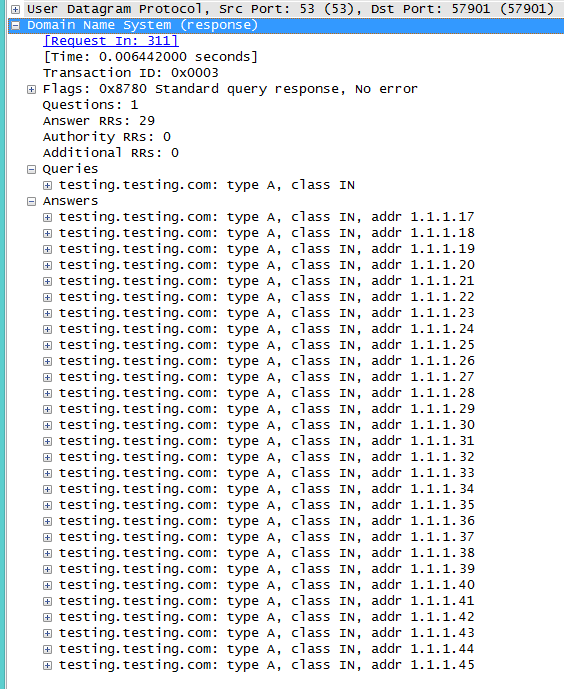 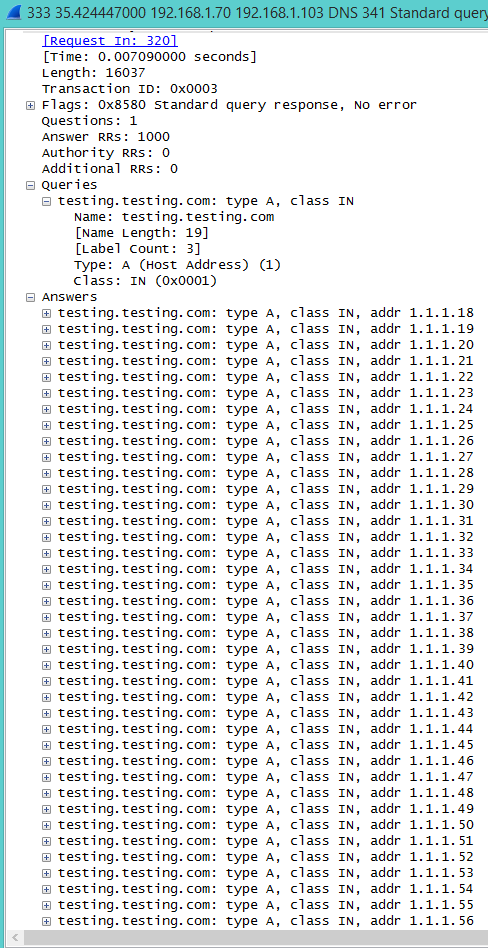 As you can see, when I use nslookup or ping from my client, it automatically issues two queries - one UDP and one TCP. As you already know, the most I can cram into a UDP datagram is 512 bytes, so once that limit is exceeded (like 20-30 IP addresses,) one must use TCP instead. But even with TCP, I only get a very small subset of A records for testing.testing.com. 1000 records were returned per TCP query. The list of A records rotates by 1 properly with each successive query, exactly like how you would expect round-robin DNS to work. It would take millions of queries to round robin through all of these.

I don't see how this is going to help you make your massively scalable, resilient social media network, but there's your answer nevertheless.

Edit: In your follow-up comment, you ask why I think this is generally a bad idea.

To answer the question as it was stated ("how many IPs can a single DNS A record hold?") the answer is very simple: a single A record holds exactly one address. There can however be multiple A records for the same name.

It is strongly recommended that you ensure the reply will fit in 512 bytes. That would allow for about 25 IPv4 addresses and 14 IPv6 addresses (considering that you need some other information in the packet as well). The exact limit depends on the length of your domain name.

Should the reply size exceed 512 bytes, it may still work over UDP if client and server supports EDNS. Without EDNS, the client would receive a truncated reply, and it would have to retry over TCP. This increases the communication from 1 to 4 roundtrips. But even worse, sometimes there are misconfigurations preventing DNS over TCP from working.

Even if you could squeeze more than 14 addresses into the reply without causing problems at the DNS layer, it is unlikely to be very useful. The timeout used by the client before giving up on one address and proceeding to the next is often significant.

Having to wait for that timeout even once can lead to poor user experience. If the client had to go through 14 addresses before getting a response, the user would have to wait for 13 timeouts.

What you are describing isn't an especially new idea. As other answers have already covered, you are limited in how many A records you can have in one reply, but that says nothing about how many A records there might be in total.

You could, for example, implement a DNS server which answers any query for an A record with a random IP. Queried enough times, this would result in 4294967296 unique A records: one for each IPv4 address.

As I said, this isn't a new idea. In fact, it's in part how Akamai works (and probably a lot of other CDNs). The A record you get for any Akamai domain is determined by their black-magic DNS servers. I bet the answer you get depends on dynamic load balancing and geographical concerns.

For example, I picked a338.g.akamaitech.net. If I look at that on my computer right now, which uses a DHCP assigned nameserver from Comcast:

What if I ask Google's DNS?

I bet if you try it, I bet you will get a different answer. How many edge servers does Akamai have serving any particular resource? More than two, I bet.

Others have mentioned it as a detail, but from a practical standpoint, the hard limit is the UDP packet size limit of 512 bytes. While it's possible to switch to TCP when truncation is detected, in practice many/most clients will not do it (and arguably they shouldn't; it would give bad user experience for most applications, and I would only expect zone-transfers or other special-purpose lookups to support TCP). So you're looking at a limit of somewhere around 30 addresses for IPv4 (A records) and somewhat less for IPv6 (AAAA) since they're larger. The length of the domain name cuts into this and will limit the number further.

The short answer: about 25 A records fit in a UDP packet. Beyond that, DNS will switch to TCP and it will not be as fast. You'll also have problems with clients that aren't using DNS resolvers capable of picking the "nearest" IP. Also, with wifi and mobile, the "nearest" is often not going to be the right server.

Don't do that. A better way would be to set up individual CNAME records for each user that point to the appropriate server. Let's say you have two servers, server-f and server-r used for IMAP. Configure each person's IMAP client with the servername being USERNAME.imap.example.com where "USERNAME" is replaced by their email username. Now you can move people between servers without having to reconfigure their email client.

I've seen this done at companies with literally thousands of users and, since things were automated, it world very well.

Why 512 bytes as a magic number for UDP payload?

If you go back to (near) the beginning and look at RFC-791, which is the protocol standard for IP version 4 you will find this text

All hosts must be prepared to accept datagrams of up to 576 octets whether they arrive whole or in fragments).

On today's Internet, the common MTU is 1500 bytes and pretty much every host that does IPv4 can support an IP datagram of that size. But these protocols predate wide adoption of Ethernet (at least IP, UDP) and the number you depended on was 576 bytes as a starting point.

The EDNS extension mechanism allows communicating to the DNS server what size response the resolver is prepared to receive, so it's common to see queries with that option present to reflect a 1500 byte MTU. You ideally really don't want to cause IP fragmentation for a bunch of reasons, thus the rather conservative packet size of responses with DNS responses transported by UDP.

As others have pointed out, it's a terrible idea for real-world use.

In the real world there are nonconforming clients and resolvers that have trouble with responses that can't fit within a single UDP datagram, and there are firewalls which will enforce specific but not-protocol-compliant ideas about DNS message size limits.

And even if you could count on your huge response getting through in every case (which you emphatically cannot) there's another reason this is a Very Bad Idea. The larger your DNS response size is, the more tempting it is as a payload for reflection attacks because you provide a huge amplification factor. In this type of denial-of-service attack, which is common in DNS, a UDP query is sent to an open recursive resolver. The source address of UDP queries are typically easily spoofed, and the attacker sets the query source to the IP of their intended target. Two desirable (to the attacker) effects are achieved: first -- a relatively small sending effort on their part (from a small spoofed query) results in a comparatively large torrent of undesired traffic arriving at the target (this is the amplification factor), and second -- the actual source of the attack is hidden from the target; the target only knows the addresses of the recursive resolvers being used as reflectors.

Interesting point of historical trivia on this subject. In the 90s, AOL expanded their DNS records such that an MX query would return >512 bytes. This violated RFC, broke a lot of SMTP servers (qmail being a popular one at the time), and caused sysadmins a lot of headaches. The fix required either patching, or adding static routes.

I don't know what the current situation is, but a few years ago, when I last touched qmail, the patches were still in place.

Not the answer you're looking for? Browse other questions tagged domain-name-system ipv4 or ask your own question.

0
Creating multiple DNS sub-domains per client
296
What's the command-line utility in Windows to do a reverse DNS look-up?
136
What's the meaning of '@' in a DNS zone file?
1
Create and manage child name servers (glue records) within my domain?
5
Why don't more organizations configure NAT U-turns/hairpins?
4
Make reachable via a fixed address (e.g. IPv6) a server that is actually connected via a variable IPv4 adress?
1
DNS for REST API in machines with different resources
14
CDN: How is it possible that my DNS delivers a different IP depending on the visitors location?