We changed our privacy policy. Read more.
This site is currently in read-only mode; we'll return with full functionality soon. Follow @StackStatus or visit our status blog for more info. 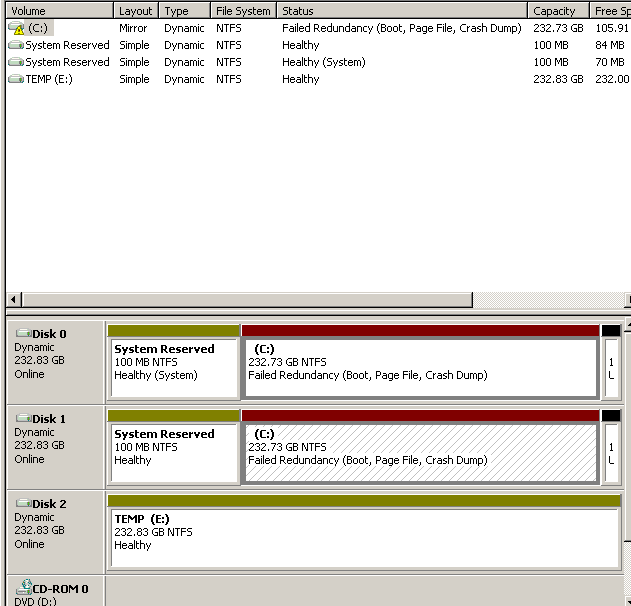 I changed the primary boot partition to the Windows Server 2008 Secondary Plex option and the server starts and runs fine, but now I need to replace the failed drives.

This is where I do not know what I am doing -- Can I just hot-swap the bad drives with the new drives, and the RAID will re-build itself. And how do I know which bay the failed drives are physically located? The indicator led's on all drive bays are green - which I would have thought one would be in an amber or similar color to alert the failure. Being only one drive left, I don't want to pop out the only healthy drive and cause further problems.

RAID1 usually implies 2 drives in the RAID. From the above picture, it's looking like one of the drives failed, or else you'd have nothing. Try looking at this technet article: http://technet.microsoft.com/en-us/library/cc787481(v=ws.10).aspx#BKMK_7

about working with dynamic disks...

This site is temporarily in read only mode and not accepting new answers.

Not the answer you're looking for? Browse other questions tagged windows-server-2008 dell-poweredge raid1 hardware .