I manage a domain with 80 PC that take the updates from the WSUS on server 2k8 R2, I have set the update to be installed once a week at 14:00 since in this time all the PC are on. Once a 2-3 month during the installation process a random PC is stuck at installation and cause my L2 network to stop.(I mean all the PC connected to that SW loose complete L2 connection, they cant even communicate locally ) I have to check manually all the PC to find this blocking Pc detach from the network, restart the switch so the other PC should be able to reconnect and get back to work.

Does anyone know what kind of updates cause this? Is WSUS involved? And how should I get rid of this annoying, shame problem. The last time I experienced this problem is today. I will attach the list of installed update.

After one year I found the solution. One day came only one update (delayed) from windows update so I was able to distinguish from other update, and found 2 PC freezed after have installed Malicious Software Removal tool. I think the problem caused by auto scan that this program do that cause Pc failure and than NIC failure and than all the Broadcast Domain Down. 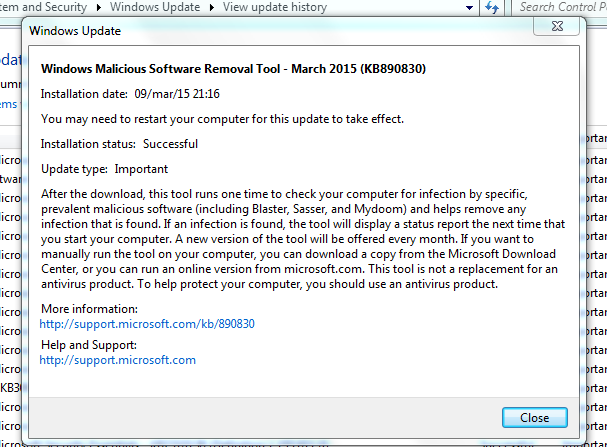 I have seen the 2 freezed PC and they have the log on : C:\WINDOWS\Debug\MRT.log unfinished so the only 2 PC that freeze have logged only the "Started On" and didn't make it for the result. All the other PC on the domain have the result summary for March. I don't know what cause this by I Declined MRT from WSUS, I have no choice and am really tired of this. The forums said that will be by a conflict with antivirus but I use MSE on all PC so theoretically doesn't have to conflict. I hope this post be helpful for anyone in this circumstances.

Not the answer you're looking for? Browse other questions tagged windows windows-update server-crashes or ask your own question.