Change an installed program from one user to all users

I have a situation where a server was set up for a specific project and SQL Server Express was installed, but it appears to have been set for only the original installer's ID. I am now required to work on the server but I can't get to SQL Server Management Studio to administer the database. The SQL Server instance is accessible through the web app running on it, and I know SSMS is on there because I've seen the original user using it.

(I'm assuming the problem is the install method because I can't find SSMS on the machine, even though I know it's in there somewhere. The original installer will be out for quite a while or I'd just wait and have him do this.)

Is there anyway to "convert" the single user install to an all users install?

If not, is there anyway to enable it for me without having to remove and reinstall the entire SQL Server package? I'm thinking something like just reinstalling the SSMS component from my ID and setting it to be accessible from all users. Would that work?

The database in question is running on SQL 2012. The below pic shows the installed programs (which shows SQL Express 2012 components) and the start menu, which shows nothing of SQL 2012. The 2008 components have never been used and were not intentionally installed (I think they are from the built in components that tag along with Visual Studio 2010). 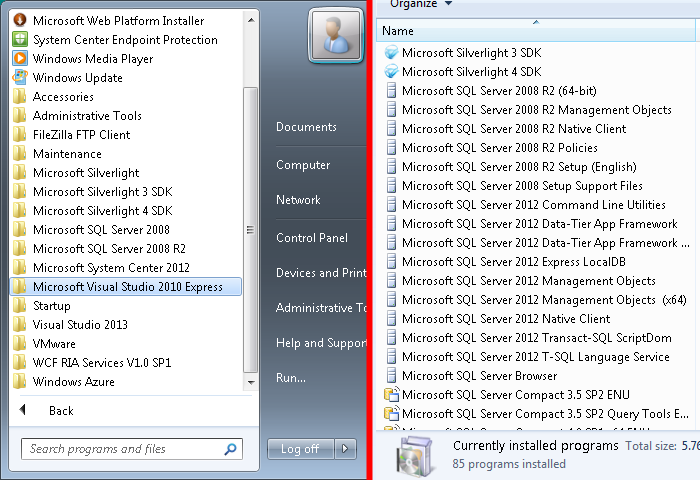 When I did a command line search for SSMS*.* it is only finding the 2008 version (under C:\Program Files (x86)\Microsoft SQL Server\100\Tools\Binn\VSShell\Common7\IDE). On my normal development machine, which also has 2008 and 2012, it finds a copy in that location and in C:\Program Files (x86)\Microsoft SQL Server\110\Tools\Binn\ManagementStudio (which should be the 2012 version). Just for kicks, I opened the 2008 version and connected to the 2012 SQL instance, but as expected, I couldn't actually open the database because it's not forward compatible.

It may just be a matter of copying the Start menu folders.

Similarly to joeqwerty's comment, I also don't recall having the "all users/current user only" option when installing the full SQL Server, but the Express edition may be different.

So, if the application was installed for only the installer's account, you can try copying the Start menu folders from their profile (assuming you have access):

To: either the same location under your profile, or, to make it available to all users, for example

Alternatively, assuming SQL Server 2008, you should be able to search for SSMS*.* in C:\Program Files (x86) and generate a shortcut from there.

Finally, if you're still unable to find it, there's no need to remove the application first. Just run the install again and only choose to install the management tools.