As part of implementing a SharePoint 2013 installation, I have configured SSO with ADFS on Windows Server 2012R2.

There are two separate AD forests, one as part of the Hosted SharePoint/ADFS and one onsite corporate forest.

What I want to achieve is some form of claim injection from the Hosted AD Forest as part of logging on with a Corporate AD account.
Specifically, users will be members of security groups to determine SharePoint licencing. For security reasons I do not want to get this claim information from the Corporate AD as this means users will be able to change their licencing status.

So, all users will actually have an AD account in both forests. Single Sign On provided by entering their Corporate credentials as part of the sign in process.

Is there some way that I can tell my hosted ADFS to look for a user in it's own AD forest which matches the incoming Email Address Claim from the Corporate ADFS, and then inject the Role claim from the hosted forest with said email claim?

Please see the picture below for what I'm trying to achieve (Sorry for the quick MS Paint drawing!): 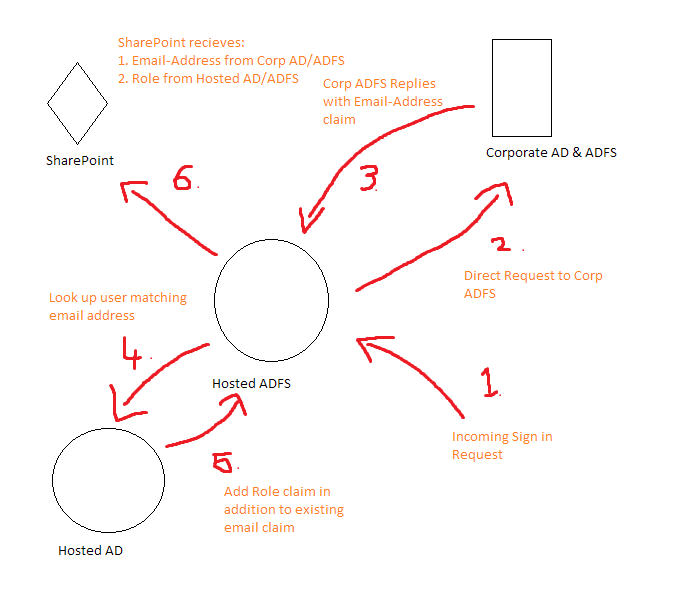 On the Hosted ADFS, Issuance Transform Rules for the SharePoint Relying Party:

Yes, that should work. If you control the claim rules on the hosted ADFS and if you have some key from the Corp ADFS in a claim, then you can do the regular AD search claim rule with that key.

I ended up getting this working, and it actually wasn't as bad as I thought it would be - I just needed to code a custom Issuance Transform Rule on my SharePoint Relying Party.

This is what I came up with:

I've inserted this as rule number 1 in my Relying Party. Because some users will not have a third party ADFS to auth against I believe this should give it the most compatibility.

After inspecting the default claims code when using the Send AD Attributes template, it will only actually run if the rule receives a windowsaccountname claim (this claim is only ever passed to the Relying Party if a user signs in without a third party ADFS).

Lastly, on my first attempt I initially thought I was stuck since I'm only using UPNs and not traditional domain\username accounts in the hosted AD because I was getting an error message in the event logs:

However, good news to me is that the username portion of the domain\username is actually ignored! https://technet.microsoft.com/en-us/library/adfs2-help-attribute-stores%28WS.10%29.aspx

Also note that USERNAME is ignored, even for Active Directory attribute stores.

So with a slight tweak to ensure the LDAP filter matches on userPrincipalName rather than the default (if query filter is left blank) samAccountName, this is now working perfectly!

Not the answer you're looking for? Browse other questions tagged authentication single-sign-on adfs or ask your own question.

1
ADFS chained over 2 forests for Single Sign On on Office 365
3
ADFS v.2.0 transitive trust in a federation scenario
4
Issue multiple claims in a single rule
2
Configuring ADFS to pass SID as claim
92
What is ADFS (Active Directory Federation Services)?
0
Imitate Azure AD user/tenant claims within ADFS
0
ADFS 2.0 E-mail address claim transformation
0
How can I remove or delete an outgoing claim in AD FS?
1
Use specific claims provider trust for a specific application group
0
ADFS not receiveing role information for some users