Bit of a newb when it comes to this but I'm giving it a go and, so far, things work but I hope I'm doing it in a correct manner and a couple of little hiccups...

New office has similar set up. Windows Server 2012 Standard (DC2) that also provides DHCP and DNS (DC2 IP: 192.168.10.12). DC2 - at the moment - is located at HQ whilst it is being configured. It has been domain joined and DCPromo'd so it is replicating and seems to work so far. I have run the DHCP split-scope wizard on DC1 for an 80/20 split. These settings have replicated onto DC2 so it is aware of what IPs it can and cannot serve. Internet modem/router is gateway - can I set this to a similar static IP as the HQ gateway, e.g. 192.168.10.2?

An issue I have run into is that when I restart DC1 it complains that an existing DHCP server is on the network and the DHCP Server service on DC1 stops. I have read that with SBS in particular that it does not like other DHCP servers to be on the same subnet, even though I have configured a split-scope? It is fully aware that the other DHCP server won't serve addresses in the range it offers because the wizard ran successfully?! As a temporary fix for this I found a registry entry (DisableRogueDetection) that has been applied to DC1 - but I do not want to rely on this because it is not a "natural" solution.

Why a split-scope? Why not? Our intention is to move DC2 to our remote site where a hardware VPN will join the two networks. I would like for the two servers to be able to help the entire network for file shares, DHCP and DNS. As a result of this I would like for DHCP requests to traverse the VPN (just in case any of the servers are down). The split-scope DHCP, I have read in many locations, should allow for precisely what I am intending? I could then have the entire network use a logical range.

If the split-scope is going to cause problems then I can revert to different ranges for the two servers.

Can I have the hardware VPN use end-point IPs that are within my subnet range? The device is a Draytek all-in-one router/VPN etc. so it has been configured as the gateway and I can get to the web interface using 192.168.10.1 so I would like to be able to get to the other end-point device (another Draytek if I can) by a similar IP (such as 192.168.10.2)...

My "idea" of a network configuration: 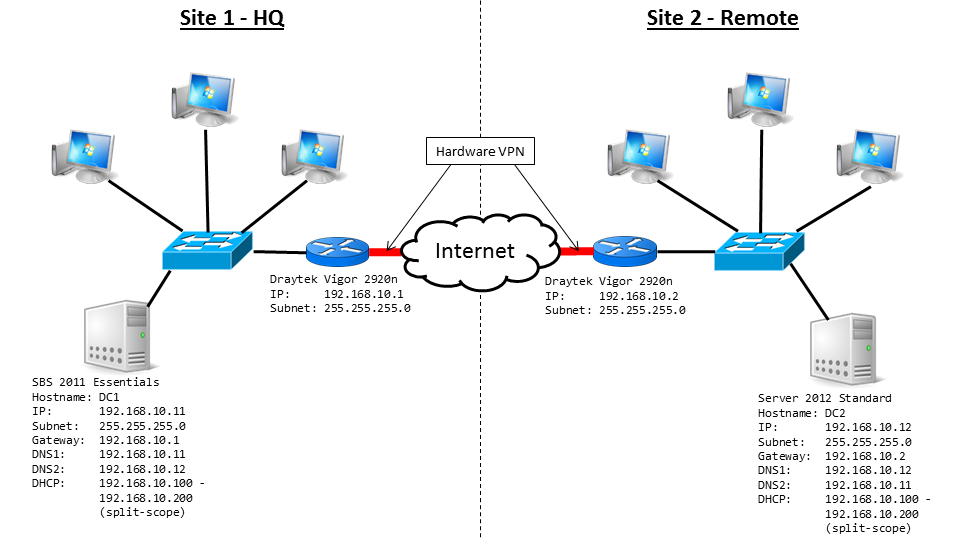 Edit 1: I guess my questions are:

Don't do this. The setup you illustrate is an over-complicated and failure-prone network configuration. In order for it to even appear to work correctly you'd have to bridge the networks which mean that all your broadcast traffic would have to traverse the WAN, which would likely be a disaster.

Use a separate subnet for each site.

I'm also confused as to why you have dived into split-scope DNS. "Why not?" is not good enough, Keep It Simple Stupid. Switching on DHCP on the router or another server in the event of loss of your DHCP server is so trivially simple that it makes no sense to try and build complex redundancy for it.

Don't understand exactly what you need to know (and where is the question)but if i understand a few: use dhcp relay. How to do that : https://technet.microsoft.com/en-us/library/cc771390.aspx

Not the answer you're looking for? Browse other questions tagged windows-server-2012 dhcp-server windows-sbs-2011 or ask your own question.