I recently started to use Nagios to monitor about 25 servers (mainly virtual, with some standalone). Them majority of the servers (including the Nagios host itself) are running Ubuntu 14.04 LTS, with a few running 12.04 LTS. Thus, I thought I could just utilize NRPE and be done with it.

Configuring NRPE has proven to be rather complex for me. For instance, for a simple check_disk command, I had to manually specify which partition to check by excluding every other partition/filesystem, as shown below:

Otherwise my thresholds for warning and critical were immediately set off by sysfs, proc, or other partitions.

Then I took a look at the base service monitor that the Nagios host performs on itself. That is listed inside /usr/local/nagios/etc/localhost.cfg, and contains the following (I'm sorry! I don't understand why it won't properly format!)

Which results in this on the dashboard: 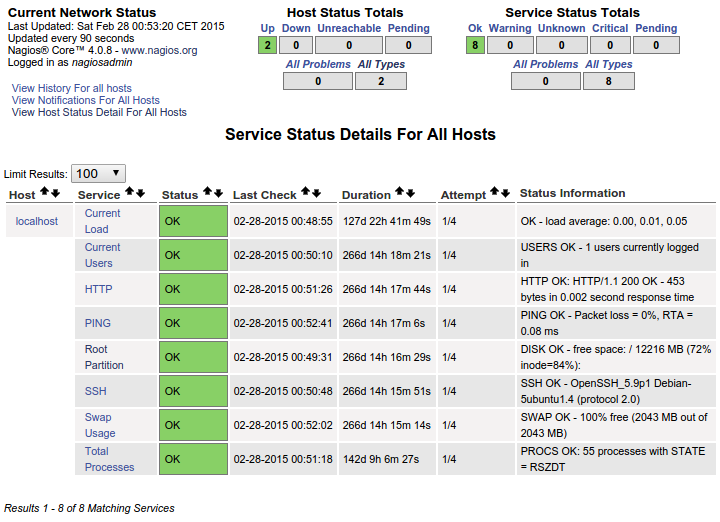 This is PERFECT for me. This is exactly what I want every single host I add to show. Rather than messing around with custom commands, how exactly should I "copy" this to each host through the NRPE conf file so that I see all these specific services for each host I add? It's clear this is already here and already functions on the localhost. I'm struggling to wrap my head around the organization needed to make this happen.

Thank you for any and all advice.

Not so long ago I wrote a really nice NRPE auto installer script which I believe can assist you if you edit it to suit your needs. The script includes many built-in checks which are being added to each host's nrpe.cfg file. Meaning, that you can configure the checks that are relevant to you and make sure that each host which is running the script will have them as well, that's about the client side.

A link to the script: Here.

In regard to the server side (Nagios), You can install a Nagios-Configuration Manager such as NagioSQL for example which will help you manage your hosts and services in a more convenient way through a GUI.

More than that, In order to make sure that all your hosts have these checks you showed, simply create a service group which includes all these services (checks) you want to monitor and then just attach this service group to each host you monitor.

Let me tell you what I did in my company, I wanted to make sure that each server is monitored with the check_load check but since we have no hardware baseline in the company which means that each server has different specs and the check_load is calculated per cores/cpu's in the machine, I've added to the "Nagios_client" module in our Puppet server a custom_fact which identifies how many processors exist in a machine and configures the Nagios check_load accordingly.

So for example, let's say server1 has 4 cpu's, meaning that 2.8 load is ideal (0.7 per cpu). Puppet through facter identifies the number of cpu's and then edits the server's nrpe.cfg like so:

Then, in NagioSQL for example, you can use the "Import feature" which allows you to import *.cfg files which will be loaded to Nagios as Hosts and Services. So you can create one host.cfg file and through a script duplicate it per host you want to monitor and just change the hostname/ip of each machine and it would take you another step into a more automatic configurations.

In my case for example, Puppet is able to understand that it is running for the first time on a machine and then also created the relevant host.cfg file in Nagios.

I believe that with Puppet + NagioSQL your Nagios administration would be a much easier task.

In regard to your difficulty with configuring any checks... You can always write your own script and configure Nagios to run it for you. For example, let's take your check_disk command, it is a very rich command which allows you to display all kinds of data which is unnecessarily important to you.

So I've had the same issue with check_procs , another very rich command which gives you all kinds of data... which I didn't need, so I wrote a simple check script which does exactly what I need and configured it in Nagios. Example:

So to make things short, if your check_disk command gives you a hard time configuring it, then simply create your own script, that's the beauty of Nagios.

I hope I helped you.

You need some type of configuration management software to setup and install nrpe daemon on each remote host as well as deploy the configurations and ultimately your plugins.

May I suggest Ansible for this task.