I'm running some images using libvirt on a small Openstack cluster. Storage performance on these machines is extremely poor: my monitoring tool shows 100% utilisation (usually on writes but sometimes on reads) with throughputs as low as ~50KB/s - up to a max of around 1MB/s.

This is a screenshot of the nmon tool showing CPU performance over time and the present storage throughput. What they show is typical: 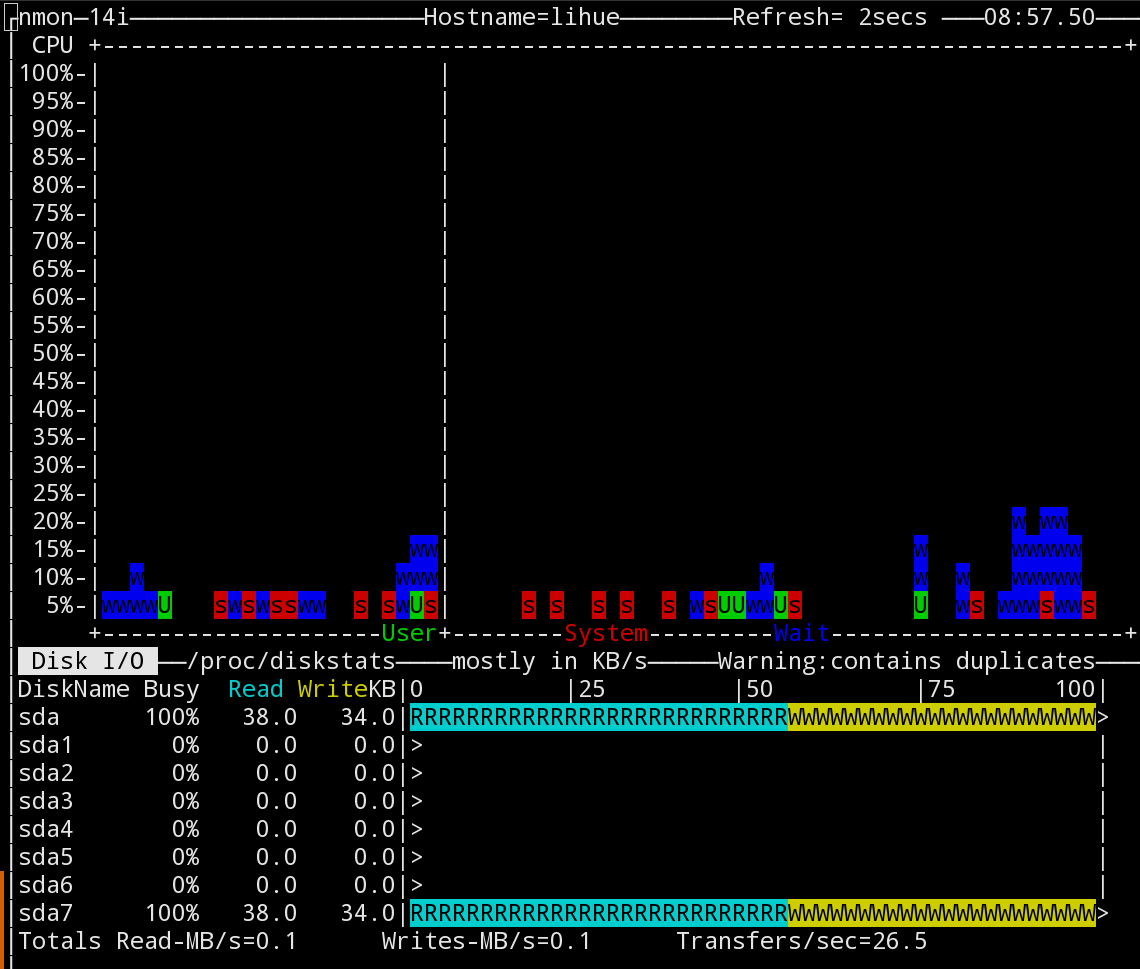 I've replicated the same performance problem on two other machines by using the packer tool to build Debian and Ubuntu images using qemu. Here is my qemu command line:

As you can see, I'm using the virtio driver, and cache=none.

I've even patched packer to use -o preallocation=metadata in the arguments to qemu-img create. This seemed to improve things marginally, but performance remains orders of magnitude lower than on the host system.

This particular screenshot was taken during the "Installing the base system" stage of an Ubuntu install, but it's consistent with more or less any storage use.

It was taken on my workstation which is a Macbrook Pro with an SSD; the Openstack machine that has the same problem is running a RAID10 cluster that I've benchmarked at around 1200MB/s writes on the host system.

Obviously I don't expect storage performance under qemu to match that of the host system - but it's remarkable how slow this is. Host VMs on the Openstack cluster take several seconds to execute operations as simple as a CREATE DATABASE statement in postgres.

At the moment the only clue I have left is this screenshot here:

Here nmon shows that /dev/sda has full utilisation, but /dev/sda7 - the partition that actually holds the qcow2 image - has only 1% usage. The latter statistic matches what I actually expect the disk performance to be here.

It's worth noting that the saturation here isn't simply an artifact of my monitoring tool: all operations on the host machine are very slow while this is happening.

How can I trace out what is actually going on here?

Should I be looking at stuff like using elevator=noop on the host and guests to tune the scheduler?

Edit: Here is the output of uname -a on my workstation:

And here on the Openstack machine:

Qcow2 file backend can be significantly slow with cache=none setting. Moreover, "-o prellocation=metadata" preallocate metadata only, and actual file data will be fragmented. In other words, the qcow2 file remain a sparse one with only short stroke of allocation (for metadata). In the past a "-o preallocation=full" option appeared, by in recent qemu-img version I did not find it.

You can try to:
1) use cache=writeback (it's a much safer bet that "unsafe" option)
2) preallocate the entire qcow2 file by issuing "fallocate <filename> <filesize>" on the qcow2 file?

You can find other information here and here.

Obviously, do the above operation on testing VM only! If, after testing, all is OK, you can propagate the changes to other VMs.

cache=none is probably not a good idea when you're using qcow2 files. A qcow2 file makes it appear that every access to the disk is fragmented. This means you get the random access performance of the drive every time and some flash drives are awefully slow (spelling intended) at random writes.

Try with cache=unsafe (temporarily) to confirm this is the problem then either choose a cache mode where you are happy with the trade-off (I would go for cache=writethrough on most machines and cache=writeback if on an ext3/4 in data logging mode) or change the virtual disk format.

If none of the cache modes are acceptable you need a more linear disk format eg lvm logical volumes (my preferred) or raw image files. IME with lvm the qemu performance is very close to the host performance.

Not the answer you're looking for? Browse other questions tagged linux kvm-virtualization openstack qemu packer or ask your own question.

22
KVM: Which CPU features make VMs run better?
10
How can I change Qemu KVM machine architecture from 440fx to q35 with virsh edit or virt-manager
1
Installing VirtIO SCSI on Windows Guest fails
6
host port forward with qemu through libvirt in user-mode networking
3
should multiple threads be spun up by kvm/virtio-scsi on the host during IO workload