Why is my web server dropping connections with a TCP reset at high load?

I have a small VPS setup with nginx. I want to squeeze as much performance as possible out of it, so I've been experimenting with optimization and load testing.

I'm using Blitz.io to do load testing by GETing a small static text file, and running into an odd issue where the server appears to be sending TCP resets once the number of simultaneous connections reaches roughly 2000. I know this is a very large amount, but from using htop the server still has plenty to spare in CPU time and memory, so I would like to figure out the source of this issue to see if I can push it even further.

I don't have enough reputation to post this graph directly, so here's a link to the Blitz.io graph: 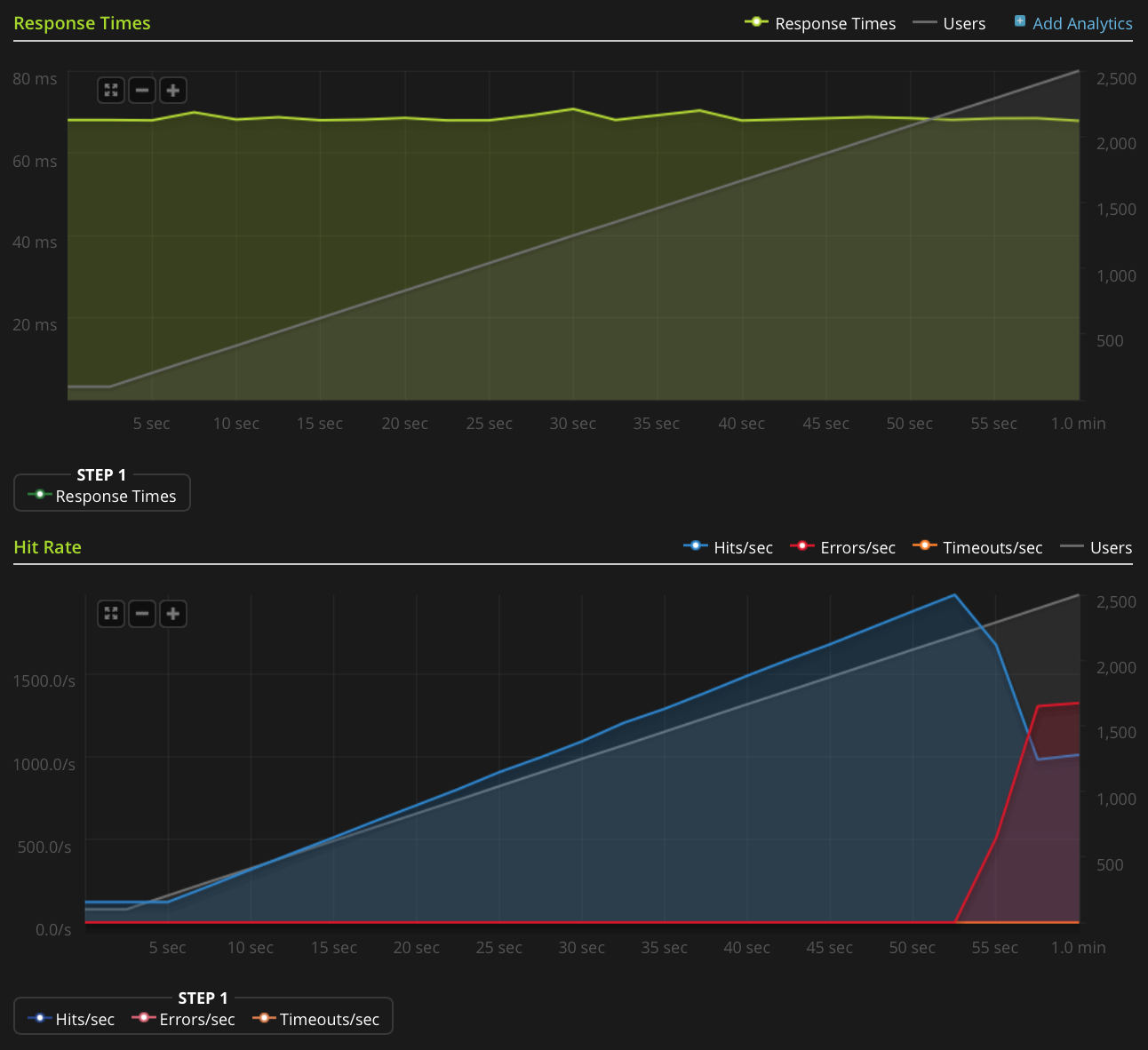 Here are things I've done to try and figure out the source of the issue:

EDIT: I did a new test, ramping to 3000 connections on a very small file (only 3 bytes). Here's the Blitz.io graph: 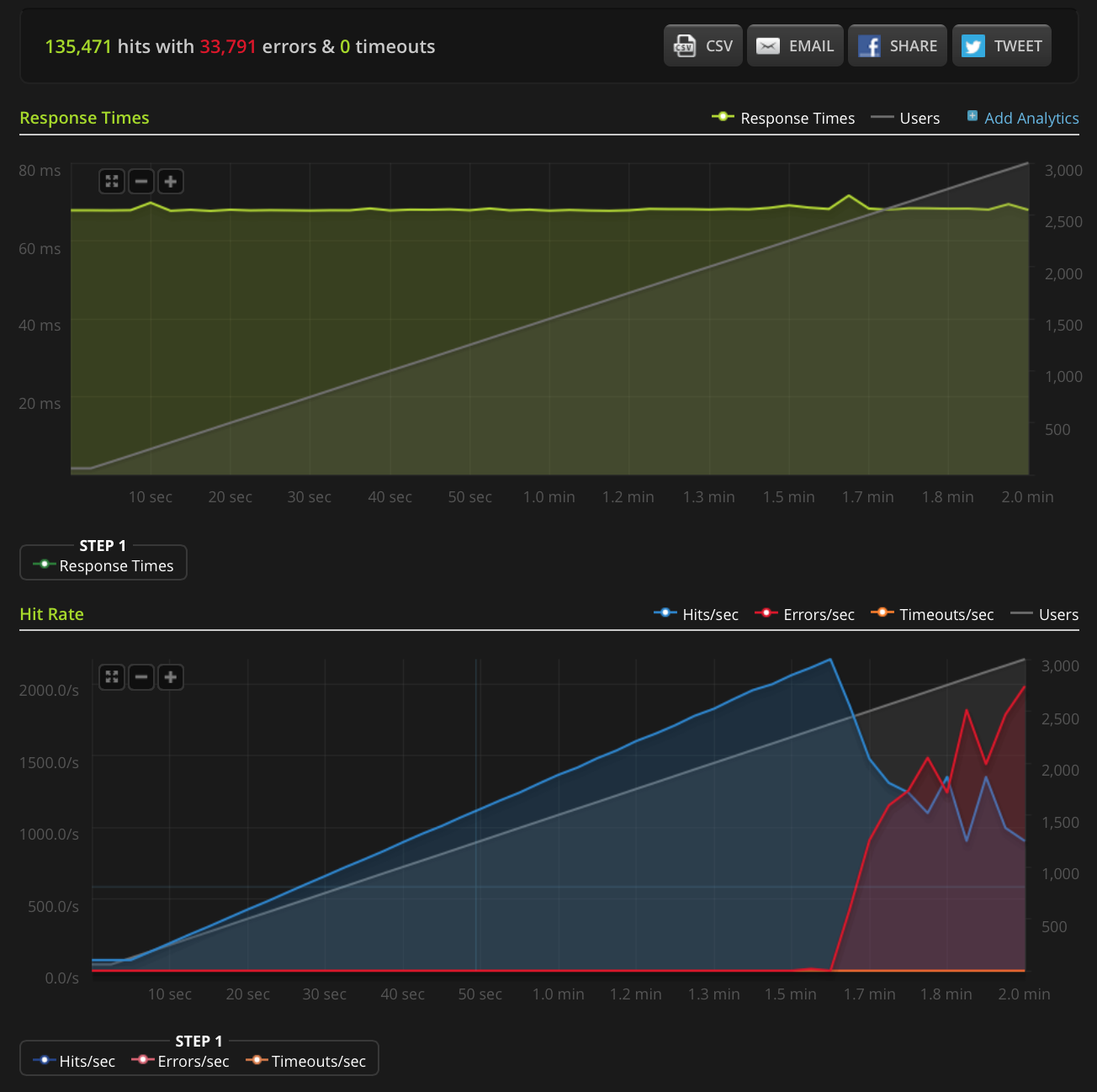 Again, according to Blitz all of these errors are "TCP Connection reset" errors.

Here's the Linode bandwidth graph. Keep in mind this is a 5 minute average so it's low pass filtered a bit (instantaneous bandwidth is probably much higher), but still, this is nothing:

Here's htop near the end of the test: 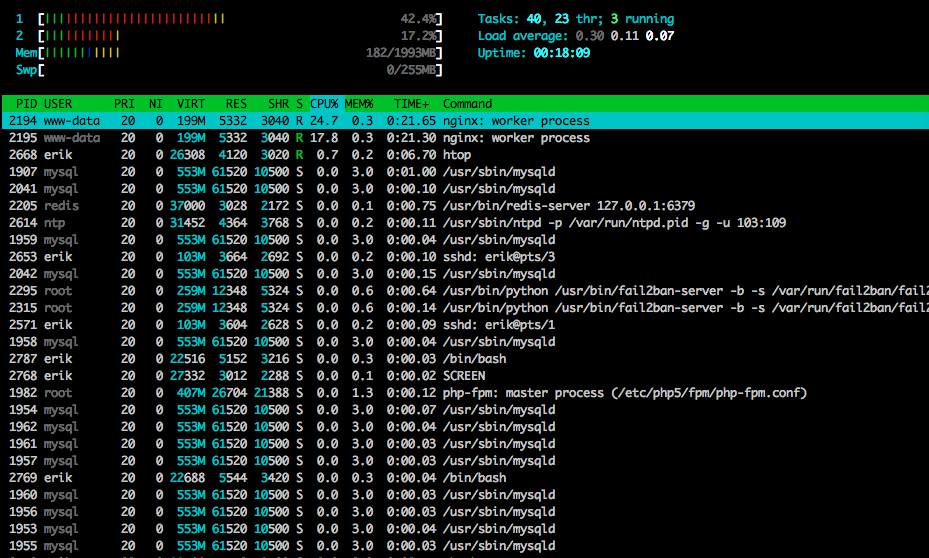 I also captured some of the traffic using tcpdump on a different (but similar-looking) test, starting the capture when the errors started coming in: sudo tcpdump -nSi eth0 -w /tmp/loadtest.pcap -s0 port 80

Here's the file if anyone wants to take a look at it (~20MB): https://drive.google.com/file/d/0B1NXWZBKQN6ETmg2SEFOZUsxV28/view?usp=sharing

Here's a bandwidth graph from Wireshark:

(Line is all packets, blue bars are TCP errors)

There could be any number of sources of the connection resets. The load tester could be out of available ephemeral ports from which to initiate a connection, a device along the way (such as a firewall doing NAT) might have its NAT pool exhausted and is unable to provide a source port for the connection, is there a load balancer or firewall at your end that might have reached a connection limit? And if doing source NAT on the inbound traffic, that could also experience port exhaustion.

One would really need a pcap file from both ends. What you want to look for is if a connection attempt is sent but never reaches the server but still appears as if it was reset by the server. If that is the case then something along the line had to reset the connection. NAT pool exhaustion is a common source of these kinds of problems.

Also, netstat -st might give you some additional information.

Some ideas to try, based on my own recent similar tuning experiences. With references:

You say it's a static text file. Just in case there's any upstream processing going on, apparently domain sockets improve TCP throughput over a TC port based connection:

Regardless of upstream termination:

Please, look how many ports are in TIME_WAIT state using the command netstat -patunl| grep TIME | wc -l and change net.ipv4.tcp_tw_reuse to 1.

Not the answer you're looking for? Browse other questions tagged nginx tcp high-load reset or ask your own question.

14
Does this prove a network bandwidth bottleneck?
1
How to view tcp connection errors in apache/ubuntu
2
is it normal for NGINX to accumulate connections in writing state?
2
Nginx proxy response time is very slow
0
High server load on KVM VPS
8
How to tune TCP for high-frequency connections between two nodes
2
Nginx fails on high load with Debian10 and not with Debian9
0
Transparent TCP load balancing with NGINX/HAproxy