I've configured DHCP options 66 and 67 on the DHCP server, and I have installed the tftpd-hpa package on the Debian server. I'm able to boot a PC from the PXE server when I use a USB stick to transfer the pxelinux files to the /srv/tftp directory, so I know TFTP is working properly.

The issue is Samba. Samba came pre-installed on Debian, and I've also tried removing and re-installing it using aptitude. I want to serve the /srv/tftp directory using Samba and authenticate to the Samba share using a non-root account I've made using "adduser". I've added the following to my /etc/samba/smb.conf file:

I then added my user account to Samba's password list using smbpasswd -a myusername
I can then see the share on my iMac, and on a Windows PC. When I try to mount the drive on either, the Windows PC (Win7) states that the share isn't accessible, and my Mac displays this: 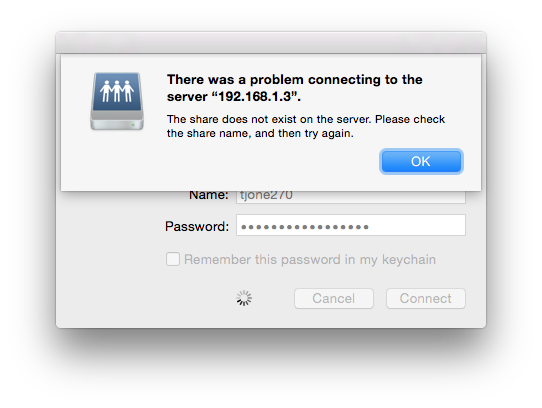 Add your windows workgroup, security and share mode to the global section of smb.conf

After adding yourself as a Samba user by

you must re-start the daemon by

Please note that the /srv/tftp mount point must be given the 777 rights, so that everyone can write to it.

you can use a more restrictive mask if needed (please edit the corresponding "create mode" variable under the [tftp] section).

Not the answer you're looking for? Browse other questions tagged debian samba pxe-boot tftp or ask your own question.