My problem is that the first request after some time without any requests always gets a slow response - around 1.5 seconds according to Chrome Dev Tools. Subsequent refresh requests/responses only take about 45 ms.

I already did set Start Mode to AlwaysRunning on the application pool, and Preload Enabled to True on the website level, but it had absolutely no effect. Even if there are no changes/uploads whatsoever, after some time passes, with the next request it takes 1.5 s to get a response.

The problem is, you need to install the IIS feature Application Initialization. Then it should work with your configuration.

The image is from Rick Strahl's blog: 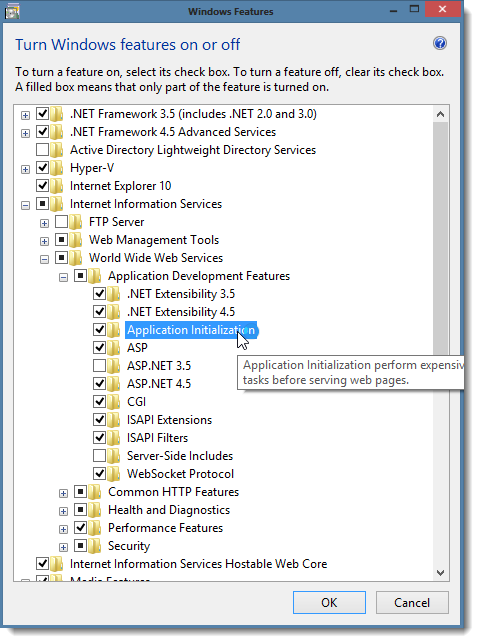 You can set this settings without the Application Initialization Module be installed, but then they won't have any effect.

And are you deploying a website that is not precompiled and/or is updatable? -

.NET Runtime version upgrades are intended to be highly backwards compatible. However, I ran into a very similar issue when migrating multiple websites targeting the .NET 4.5.1 Framework from a Windows Server 2008 R2 server to a Windows Server 2012 R2 server patched up to the .NET 4.6 Runtime. All of my initial page loads (on multiple websites) began taking two minutes for each individual page, instead of a split second. And all of my experiments with different IIS settings were unsuccessful in resolving the issue.

Ultimately I was able to resolve the issue in one of two ways:

By contrast, all of my attempts to roll back or repair the .NET Runtime version on the server to the .NET 4.5 Runtime did not resolve my page load issues. (There is essentially no clean, reliable process to fully rollback a .NET Runtime short of re-imaging the server.)

Not the answer you're looking for? Browse other questions tagged iis vps windows-server-2012-r2 iis-8.5 or ask your own question.