Windows 7 contains duplicate, identical builtin print forms (Letter, Legal) but only one of the 2 successfully prints

I have a Windows 7 64-bit machine with a Lexmark E360dn printer. Whenever the user attempts to print anything, the printer defaults to "Letter" size, as expected. When the user clicks PRINT, the printer shows an error asking them to load "Custom Size 6", whatever that is. The problem is that the user's machine actually has two forms, both named "Letter". Selecting the second one somehow allows the print job to succeed.

In the print sever properties, I see 2 "Letter" sizes, 2 "Legal" sizes and other duplicate forms that are never used (Executive for example). As far as I can tell, this should not be possible. I also cannot set the second "Letter" as the default print size. No matter what, it always tries the first "Letter", I assume because the strings in the dropdown menu are expected to be unique.

Here is a screencap of the duplicate "Legal" size: 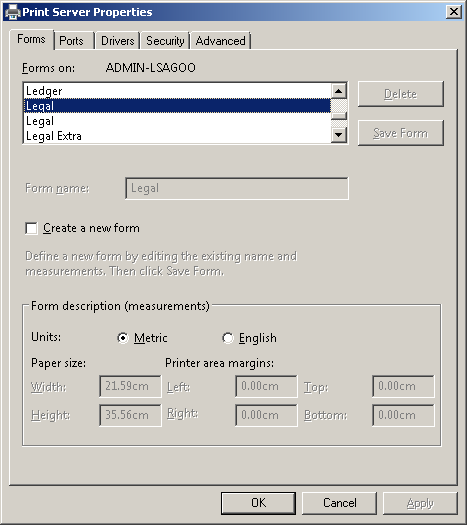 Note that the DELETE button, as well as the measurements, are disabled as they should be for a built-in form.

Now here is a screencap of my duplicate "Letter" form: 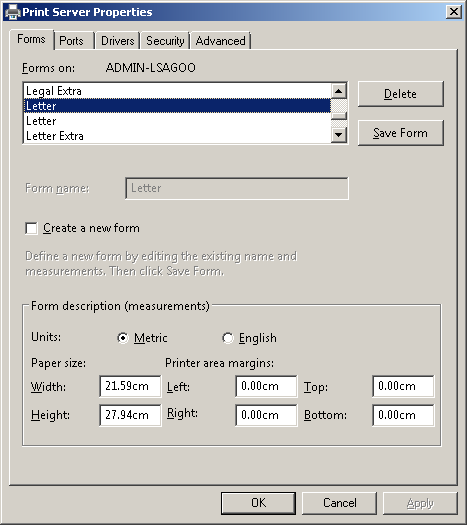 The worst part is that my 2 "Letter" sizes have identical dimensions. Why one will work while the other fails is beyond me. This only affects printers that use the windows forms list. Others I tried, like a fancy Konica printer, manages all forms in its own driver so there are no issues there.

Even though this is supposed to pretty much undo any printer related actions you've done since Windows was installed, my duplicate forms remain. I've uninstalled all printers several times, including virtual printers but the forms always remain.

It's worth noting that none of the ANSI A/B/C sizes are duplicated, only the 'named' ones. The machine has the French language pack installed but is running in English. I wonder if it can be an issue with the language and the built in forms even though no other users have had this issue?

From what I can tell, it seems like windows is adding 2 separate forms to the list that have the same name. Once in the list, I can only really see or modify one because of the way the dropdown list works. I guess my question is "How do I remove a print form if windows thinks it is builtin, but it's not?". According to How to delete system default printer forms? this cannot be done reliably. Plus, I'm not actually trying to delete built in forms.

They likely come from or were added by a printer driver. If you show the list of forms under the Printer Server entry in question you can tell which are built-in and which come from a printer a bit easier: 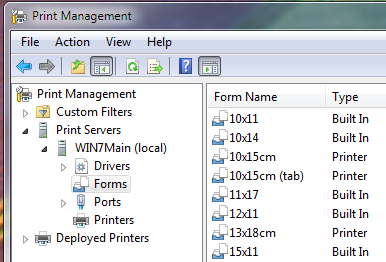 Sometimes trimming excess printers and printer drivers will reduce this list. You can attempt to delete them here as well but probably won't have any more luck than in the properties dialog.

Uninstall all the print drivers on that pc and then run ccleaner and clean up the registry. After that reinstall the printer drive and test.

Not the answer you're looking for? Browse other questions tagged windows-7 printing or ask your own question.

12
How to delete system default printer forms?
0
How can I delete a print job that is holding up the queue and monitor it?
1
How do you add or remove printers from the Select a Printer list?
1
Allow users to remove printers via group policy
1
Printing weirdness - German language, Xerox 7125