This is the setup I have :

I want to be able to connect to the Linux box that is behind a firewall from afar via ssh. I have read about ssh tunneling and it occurred to me that this could be my solution. I was able to open a remote ssh tunnel between the A and B. But I can't figure out how to use this tunnel to control A via ssh or if it's even possible. e.g : connect from my laptop to A via B.

This is the command as I understood it to open the tunnel :

(requests via port 2022 transferred to port 22(ssh) on the target machine) via user@serverB.

After I open this tunnel what should be the actions to connect via ssh to the target machine?

Please correct me if my understanding is wrong here.

What you're referring is "SSH REMOTE FORWARDING", and is properly explained in the "man ssh", regarding the "-R" option.

In your context, where:

SSH remote forwarding can be used to reach LINUX_BOX_A from SERVER_B. The only condition is: LINUX_BOX_A MUST be able to connect via SSH to SERVER_B.

To achieve this goal you need:

this will open an ssh connection from LINUX_BOX_A to SERVER_B that will be used for the remote, incoming, connection.

After above ssh connection is established, you can:

such ssh-connection, launched on SERVER_B, will be directed to the 2222 port listening on localhost that... is binded to the previous ssh connection. So this will be an "ssh connection within another ssh connection".

A final note: Obviously, all of the above has some (potentially serious) security implications that are out of scope of this answer.

If you control the firewall you can use port-fowarding on it to avoid the use of a reverse-ssh (it will be more stable).

I have drawn some sketches

The machine, where the ssh tunnel command is typed is called »your host«. 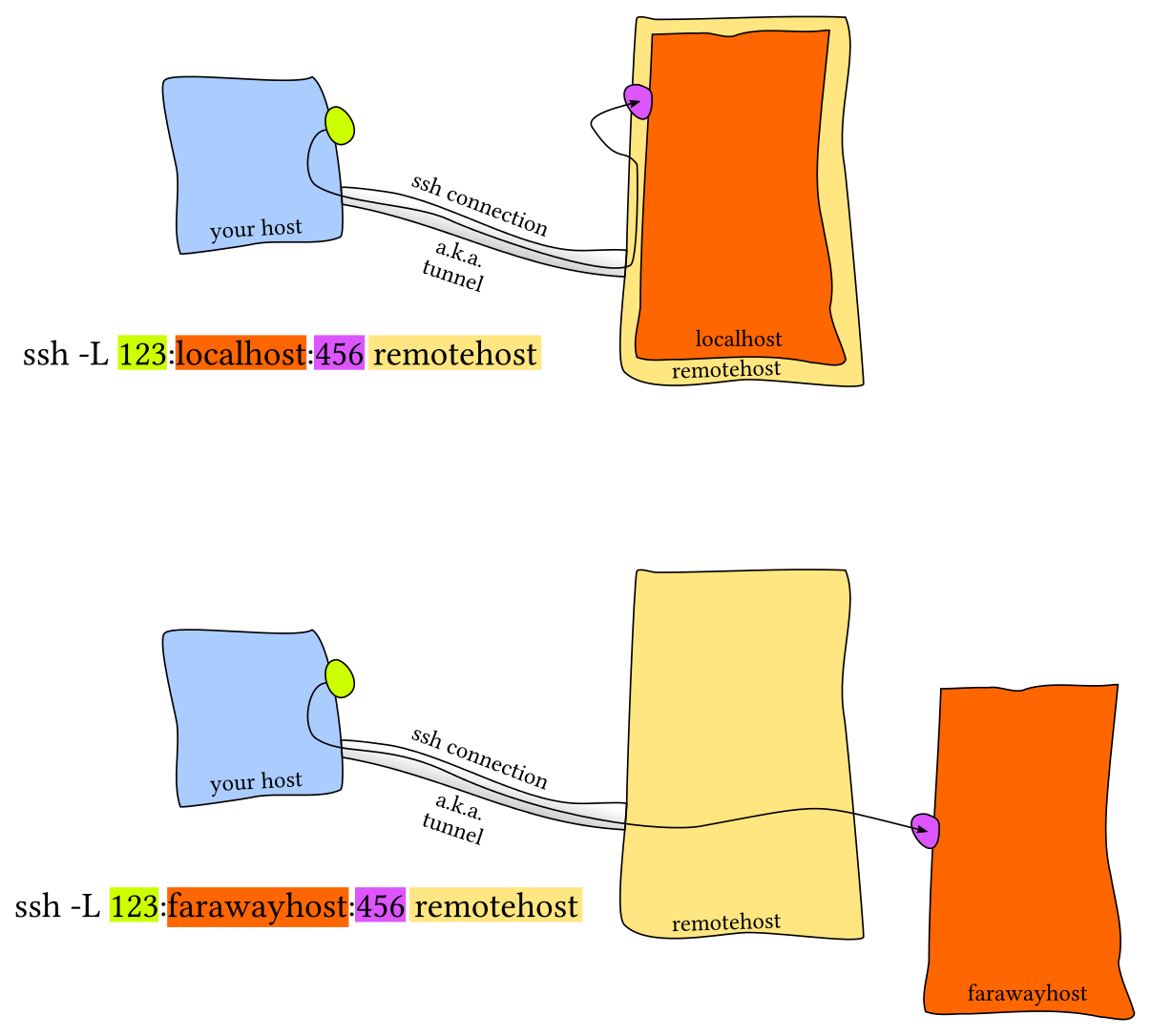 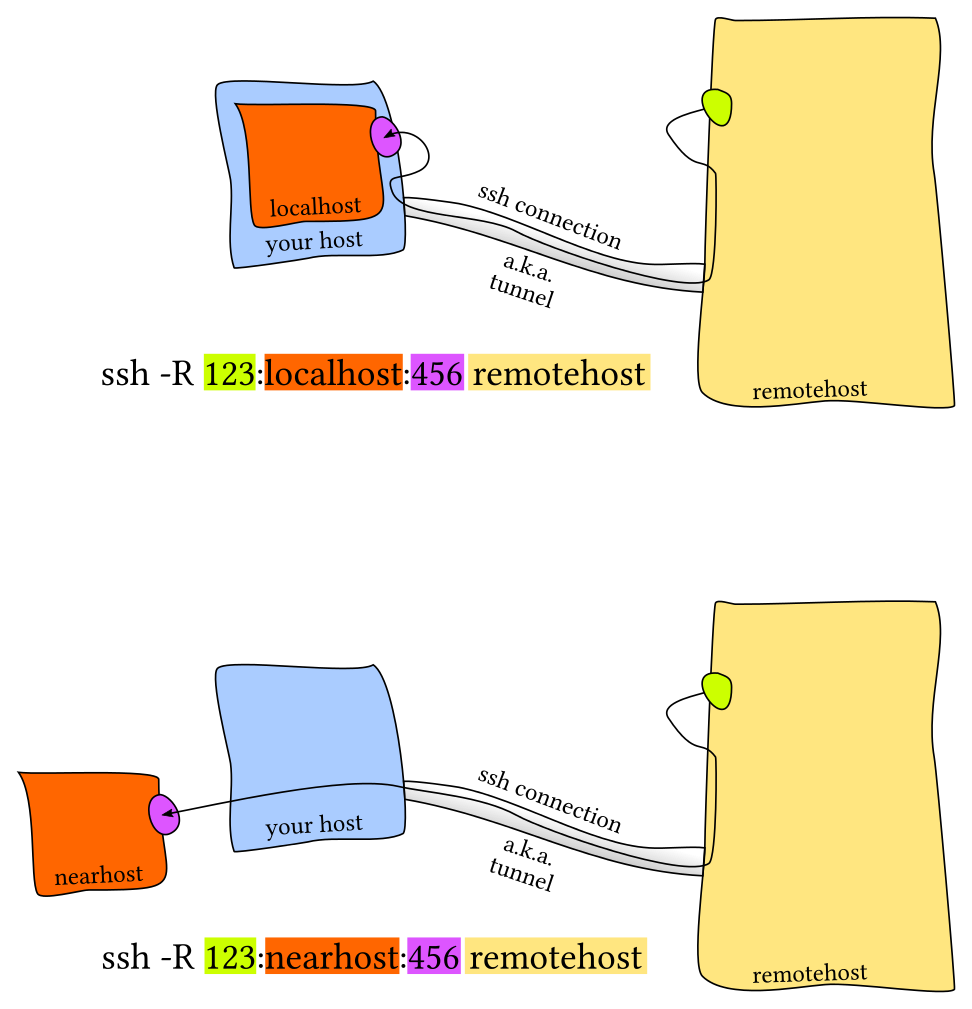 The third image represents your case. The computer behind the firewall, you called it A, is your host, because you have to execute the ssh command on this computer, to open the tunnel to the localhost of your host (see third image).

The remotehost (in the image) is your serverB (which is accessible from everywhere).

All connection attempts to the green port 2022 are forwarded through the ssh tunnel to the pink port 22 on the your host’s localhost (the firewalled computer).

Now you can ssh from anywhere in the internet to the remotehost (you called serverB) on port 2022 (with the command: ssh -p 2022 user@serverB from any machine in the world) and will be connected to your firewalled computer. That means, you can control this computer.

You can write a script startTunnelToHidden that keeps the tunnel alive and re-establishes the connection, every time it gets lost. It is a good idea to start this script inside a screen session and even better to start it with ssh-agent to be able to connect with a public key (because, otherwise how would you enter the password? It is possible, but better to use a public key).

To open the tunnel on the firewalled computer, enter:

Or put this in /etc/rc.local (so that the tunnel gets opened on boot of the firewalled computer):

Reattach the screen session with your tunnel with screen -r tunnelToHidden

Not the answer you're looking for? Browse other questions tagged linux ssh linux-networking ssh-tunnel or ask your own question.

21
how to tunnel Windows Remote Desktop through ssh using a linux box?
9
How to limit reverse SSH tunelling ports?
36
ssh tunnel - bind: Cannot assign requested address
0
Can I ssh tunnel and reverse ssh tunnel in one connection?
6
Reliable Reverse SSH Tunnel
0
SSH reverse tunnel through middleman server - how to connect in one step?
1
Tunnel windows VPN through SSH
2
SSH Tunnel or Reverse Tunnel
0
Can you connect to a VPN through an SSH reverse tunnel?