On a Windows Server 2012 R2 server, I have created a scheduled task with a trigger defined as daily, repeat every five minutes. (I have multiple other tasks configured like this that I have no problem with).

The task itself works perfectly; if I manually run the task (from within task scheduler, i.e. right-click, run), it works with no problem and does what I want it to do. And gives last run result of 0x0. What's not working is the trigger. It just doesn't run.

To clarify, I'm not saying it runs and doesn't work, nor does it give an error or reason why it's not running. Just, nothing happens. I've checked the Apps and Services event logs under Microsoft/Windows/Task Scheduler/Operational. I can see a number of eventID 107 logs, but none for this task. In task scheduler, there is nothing in the history tab except for where I've run it manually.

The task is set to run as SYSTEM (whether user logged in or not is set by default when you set it to SYSTEM and grayed out). Under the Conditions tab, I have nothing ticked. Under settings, the following are ticked:

The option for "If the task is already running, then the following rule applies:" is set to "Do not start a new instance", but I've already tried ending all running instances of the task.

Ok, real face palm moment. Found the answer, it's this: 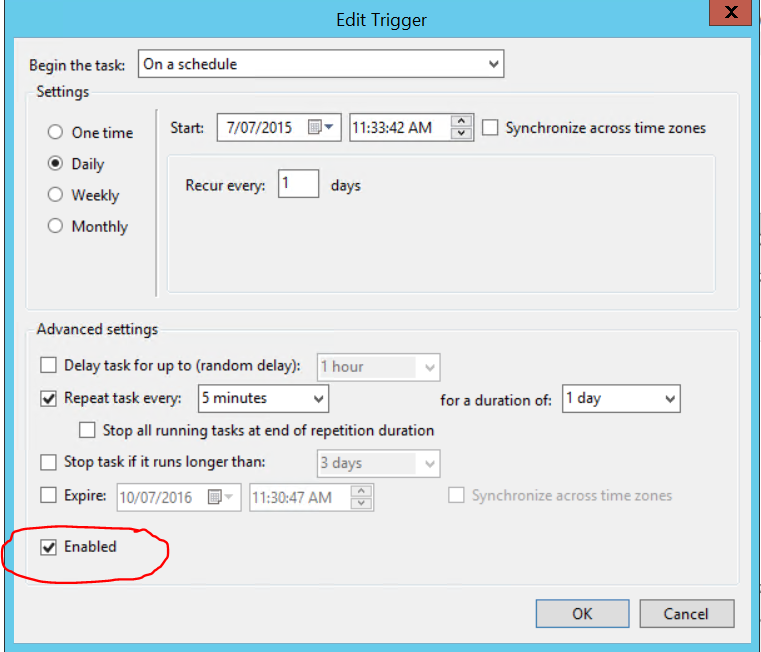