Why does dig +trace seem to ignore the DNS glue records?

Here are my questions:

Here is the longer explanation:

This is the full capture of the DNS transaction that that prompted these questions.

I am using dig +trace to follow the DNS process for a simple A record resolution for www.pizza.com. As, expected, the first request was to my DNS server, looking for the Root Nameservers (Packet #1). My DNS Server then responds with the list of all 13 Name Servers (Packet #2):

Note that in Packet#2, there are no Additional Records included. Which prompts my client to look up the A record for each of the provided Root name servers. Which happens in packets 3 thru 28:

So far, this is expected. But next it gets interesting. 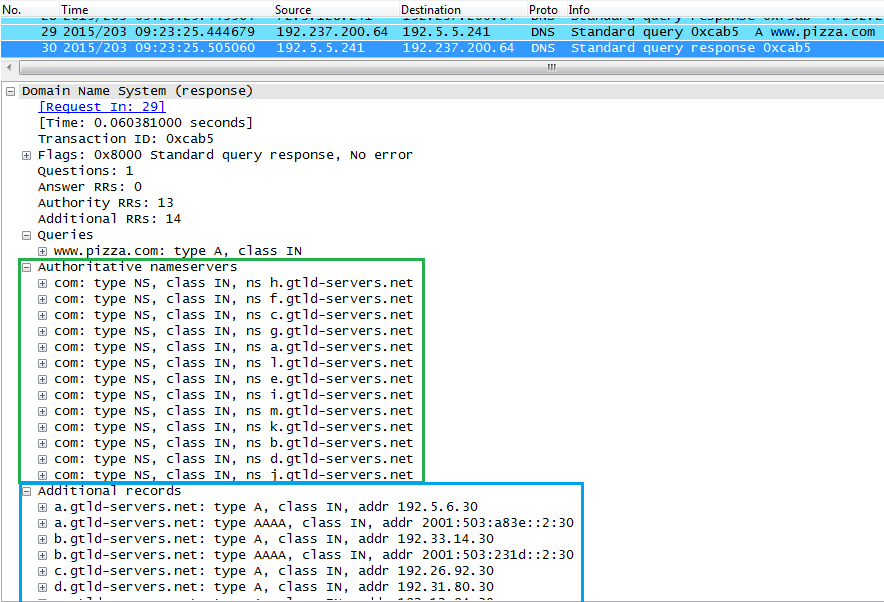 The same thing happens just a bit further down (packets 57-66) when my client asks the .com TLD name servers for the A record for www.pizza.com, and receives the Authoritative NS records for the Pizza.com domain. The .com TLD Name servers provide the glue records, but my client still goes out and manually resolves each NS server's A record manually.

Edit 1: Added questions to the top as well, to make it easier to understand what I am inquiring about Edit 2: This question is similar to mine, but not exactly the same. In this question, @Andrew B confirms the same behavior I am seeing:

+trace cheated and consulted the local resolver to obtain the IP address of the next hop nameserver instead of consulting the glue.

But my question is specifically why does dig +trace do that? What is the benefit? What is it trying to provide? It seems just like more work, that can sometimes even cause an inaccuracy in how dig resolves an address and how actual DNS resolves an address (as indicated by the other question).

The other question does seem to answer my second question, however. It seems this behavior of ignoring the glue records is specific to dig, and not how a "normal" recursive name server would act.

The official documentation says that dig can use glue records for subsequent queries but may revert to recursive queries if glue records are not provided [1]:

dig may still send queries to the servers listed in /etc/resolv.conf when using +trace When following delegation iteratively as specified with the +trace option, dig will begin by requesting the NS records for the servers authoritative for root ("."). These may or may not be supplied with glue - that is A and AAAA records that can be used for the next queries dig has to send. When there is no glue provided, either on the initial query for the root nameservers, or later on when following delegation, dig will revert to recursively querying the servers listed in /etc/resolv.conf to obtain the needed A/AAAA RRsets.

Specifying @server does not change this behaviour - the server specified in this way will only be queried for the NS records for the servers authoritative for root (".").

It might be wrong documentation or a bug in dig.

Not the answer you're looking for? Browse other questions tagged domain-name-system dig glue-record or ask your own question.

32
Is dig +trace always accurate?
32
What is the role of NS records at the apex of a DNS domain?

37
How to test DNS glue record?
5
When does the TLD having glue records for the nameservers save DNS lookups?
3
Confirming the existence of GLUE records
4
Does a domain's Glue Records get transferred when I transfer the domain to another registrar?
1
My own nameservers don't work without adding glue records, why?
1
Impact of changing DNS glue records from registrar
0
Why does DNS return an FQDN with glue record instead of IP
2
Does the Glue record get cached by the Recursive resolver?
0
Dig +trace doesn't display the whole delegation chain