I have just installed CentOS 7:

I am trying to configure the firewall, and I'm told that in CentOS 7 iptables is no longer used, replaced by firewalld. When attempting to run a command to set a firewall rule as such:

I receive the following message:

edit: I tried the following command, too:

I tried running the following to check that firewalld was installed:

Any ideas what is wrong with the CentOS 7 install? This is a clean install on an OpenVZ VPS, I'm yet to make any changes at all.

Looks to me like you don't have it installed/enabled.

Try the GUI tool instead, this util ships default with centos 6/7. firewalld is deprecated after centos5 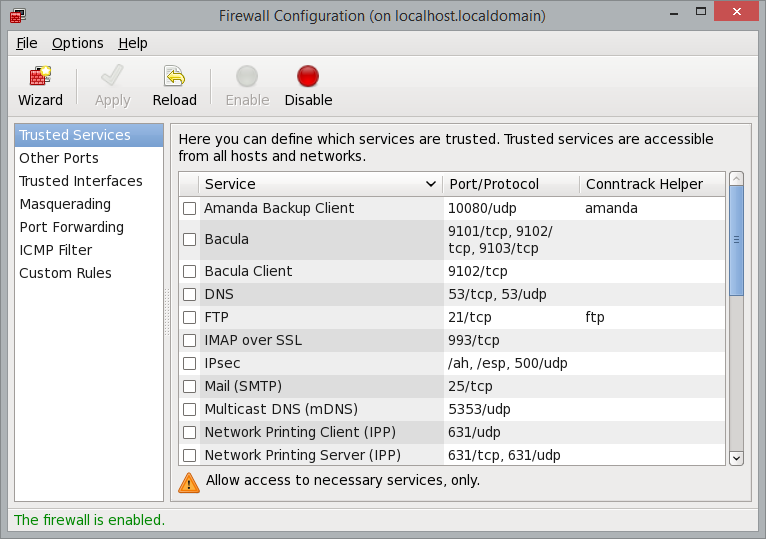 Not the answer you're looking for? Browse other questions tagged centos vps openvz firewalld or ask your own question.

2
firewalld service is running, but firewall-cmd doesn't work
0
Firewalld Centos 7 creating rule
0
firewall-cmd on OpenVZ CentOS 7
5
CentOS 7: Fresh Install Firewalld doesn't work at all (Fatal Error: No IPv4 and IPv6 firewall)
2
Can not open ftp port via firewalld
1
in firewalld port 80 is closed but nmap shows the port is open, and I can connect to it
3
Install Apache to CentOs 7 installed but not showing in the browser
0
Stopping firewall on CentOS 7
0
How can I debug firewalld on CentOS 7 stopping running unexpectedly?