How to disable perf subsystem in Linux kernel?

I'm running some benchmarks. My benchmark runner monitors the dmesg buffer between experiments, looking for anything which could impact performance. Today it threw this up:

After some searching, I now know this relates to a profiling subsystem in the linux kernel called "perf". I don't think we need this, so I would like to disable it altogether.

Searching again, I find that the sysctl perf_cpu_time_max_percent could help. Here someone suggests to disable by setting it to 0. Reading into this some more here:

Hints to the kernel how much CPU time it should be allowed to use to handle perf sampling events. If the perf subsystem is informed that its samples are exceeding this limit, it will drop its sampling frequency to attempt to reduce its CPU usage.

Some perf sampling happens in NMIs. If these samples unexpectedly take too long to execute, the NMIs can become stacked up next to each other so much that nothing else is allowed to execute.

0: disable the mechanism. Do not monitor or correct perf's sampling rate no matter how CPU time it takes.

1-100: attempt to throttle perf's sample rate to this percentage of CPU. Note: the kernel calculates an "expected" length of each sample event. 100 here means 100% of that expected length. Even if this is set to 100, you may still see sample throttling if this length is exceeded. Set to 0 if you truly do not care how much CPU is consumed.

This sounds to me like 0 means the profiling sample rate is no longer checked, but the freq subsystem remains running(?).

Can anyone shed light on how to completely disable kernel profiling with freq?

EDIT: Someone suggested I try building a kernel without perf, but I don't think this is even possible. The option does not seem switchable: 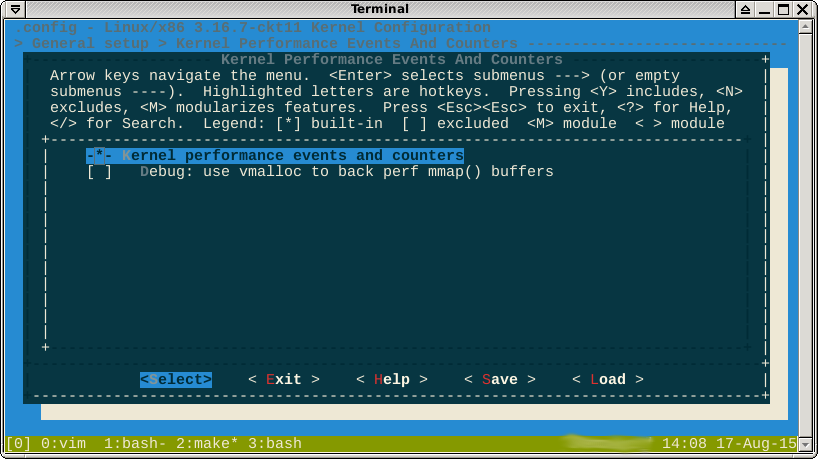 EDIT2: After more reading, I decided I might be able to set kernel.perf_event_max_sample_rate to zero. I.e. no samples per second. However, you can't do this either (source):

EDIT 3: FWIW, perf_cpu_time_max_percent is set to 25, which means the kernel was spending over 25% of it's time sampling hardware registers. This is unacceptable for a benchmarking machine.

I'm now certain that setting perf_cpu_time_max_percent to zero would only worsen the situation, since the kernel would continue to use over 25% of it's time reading hardware registers. The error fires to adjust the sample rate, thus trying to ensure that the kernel meets its quota of using <25% of it's time in perf. 25% is still too high IMHO.

If I really can't disable perf, probably the best compromise would be to set perf_event_max_sample_rate to 1.

EDIT4: A friend suggested that I may have misinterpreted the meaning of perf_cpu_time_max_percent, so the above statements may be incorrect. A value of 25 indicates that the kernel used more than 25% of some arbitrary length that it had reserved for servicing perf interrupts.

As pointed out in the comments, the -*- against the perf option suggests that the feature is forced on by another enabled feature. If I look in help, it says which features these are: 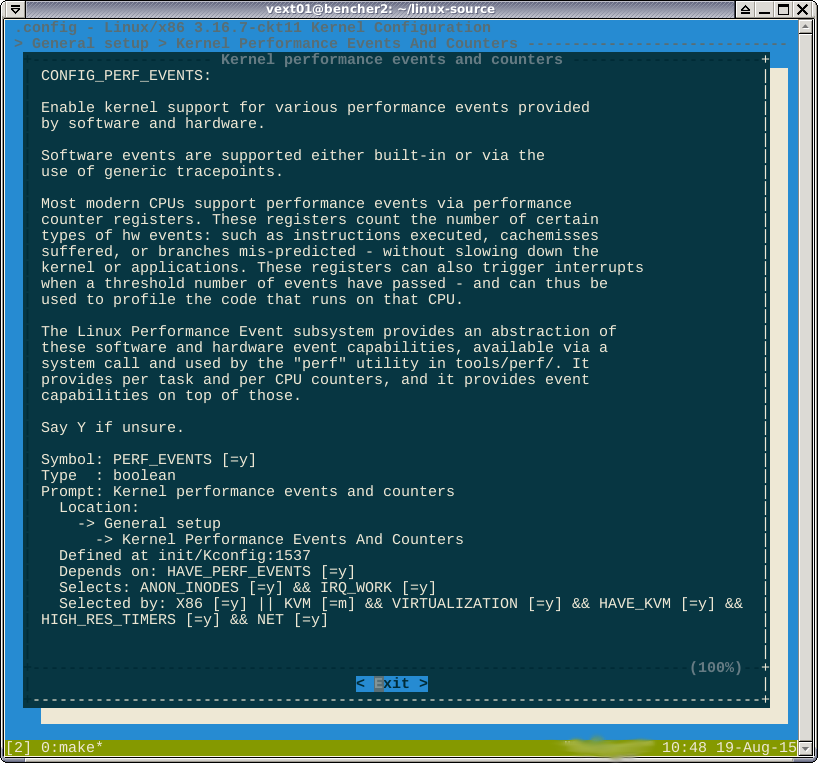 I don't think I can win here. The Boolean formula selected by says

So I would like to slightly change my question to:

Which perf settings can I use to minimise the time spent by the kernel in perf routines?

Bear in mind that the overall aim is to control sources of random variation for benchmarking. If I can't disable perf, how can I minimise it's impact on benchmarks?

Disable the [HAVE_PERF_EVENTS] kernel option and recompile the Linux kernel.

Not the answer you're looking for? Browse other questions tagged linux kernel benchmark dmesg or ask your own question.

7
Disable all disk caching for apache2 on linux
1340
How can I sort du -h output by size
3
Why data sending is heavier for CPU than data receiving?
1
How can I diagnose and fix frequent 100% cpu utilization from kernel?
3
Disable ICMP Unreachable replies
7
Optimal kernel configuration and patches for KVM host
86
Does the "bs" option in "dd" really improve the speed?
2
High CPU usage by apache/httpd for light load, 'perf record' points at vmware/hardware