This is the configuration of the tun adapters of both servers.

I built a virtual network and a series of VMs, shown in this image, to make visualizing this problem easier. 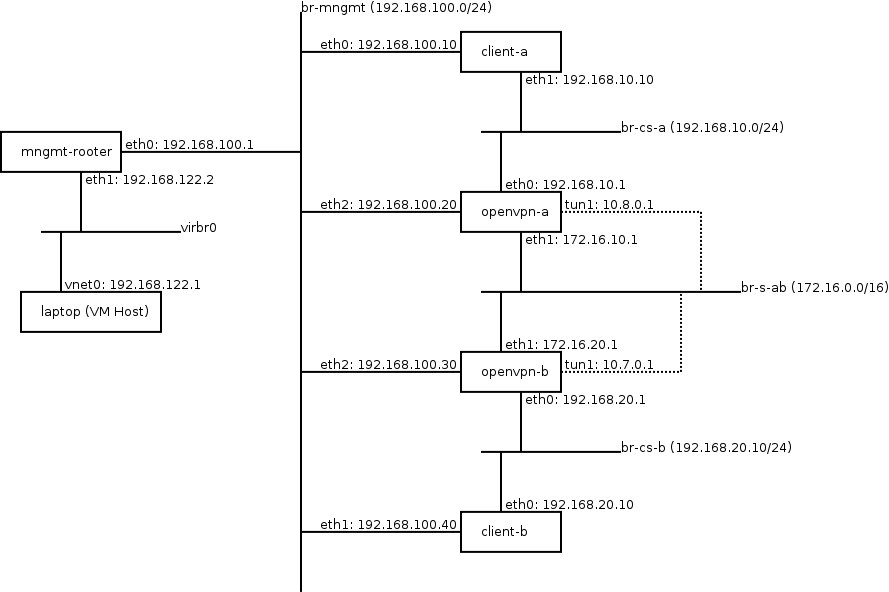 Each system expected to forward packets must have ipv4 forwarding enabled:

The configuration of openvpn in my test network is simplified. I'm using openvpn without authentication / encryption, running it from the command line, to provide a simple tunnel between machines "openvpn-a" and "openvpn-b".

This resulted from the packet getting forwarded by openvpn-a and arriving at openvpn-b with a source address for which openvpn-b did not have a route.

A solution to this problem can be approached in several ways... one, is to add a route to the 'a' side of the network on openvpn-b, via openvpn-a's tunnel device:

Another is to configure openvpn-b's default route to be via openvpn-a's tunnel device:

And still another is to configure NAT on the tunnel device on openvpn-a:

Wireshark and/or tcpdump can be used to great effect when diagnosing this problem. As can be seen on openvpn-b's tunnel device when a packet arrives and there is no route to the source address network:

Not the answer you're looking for? Browse other questions tagged linux routing openvpn linux-networking or ask your own question.

3
Multiple OpenVPN clients on the same host
3
Openvpn not routing to the internet over a tun interface
7
OpenVPN Chaining
0
OpenVPN tun routing (can ping tun interfaces) with mikrotik and NAT on both ends
15
Allowing SSH on a server with an active OpenVPN client
3
How to get OpenVPN Client (Mikrotik RouterOS) <-> OpenVPN server (Debian/Linux) setup to work
0
Can the inet address assigned to P-t-P tun interface be used for a client inet address if the server runs out of all addresses within a subnet?
0
Routing and OpenVPN not running on the default gateway