My terminal server users experience a delay when selecting printers from MS Office applications to be printed to network printers. Everything stalls on:

All of the RDS servers experience the delay, however the issue seems to be isolated to Microsoft Office 2010 applications. Adobe, web browsers, etc. are not impacted.

It’s a 5-7 second enumeration delay under normal use, and up to 35 seconds at the busiest periods of the day RDS server.

Here's a video to show the timeline... 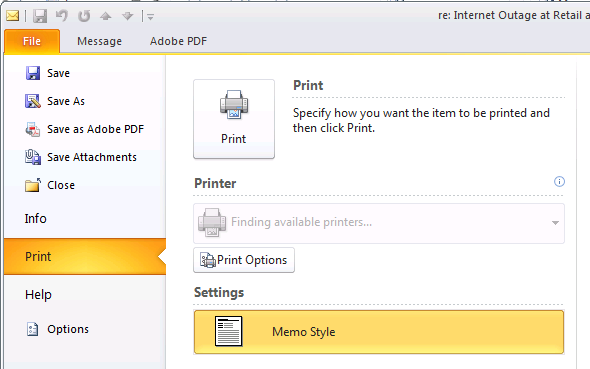 There are 16 network printers in this environment using universal drivers where applicable.

I already went through the process described at:
2008 R2 Terminal Server: "Insufficient system resources exist to complete the requested service"

How many of you have ever dealt with an issue where you just knew that something was wrong with your print spooler but could not quite put a finger on it? Maybe print jobs were slow, certain users could print to some printers but not others, or maybe nobody could print at all? - Blake Morrison - Ask Performance Blog - Microsoft Fixit for Printing

The quoted article references two Microsoft FixIt which basically cleans up the Spooler settings and restore it, etc.

There are two modes - full and lite. The lite has less things it does. The blog post details what the FixIt does behind the scene.

In case it helped, will write an answer with what we talked.

There are several issues that have been associated with a high number of inactive Terminal Server ports. Delayed logon times to RDP sessions, failure of printers to redirect, and slow server performance due to registry bloat from all the ports. These inactive TS ports accumulate because the Remote Desktop Services Device Redirector service creates a new port every time an RDP session is established, but the ports are not always recycled. Every RDP session can possibly create a new port, and every ended session means a new inactive port. Performance degradation is known to occur when 250 or more TS ports exist in the registry. Increasingly large numbers of redirected devices will exacerbate performance delays.

and run that FixIT to clean the registry.

This is an recurring issue when using horribly written print drivers. In this situation there was two suspects (which both are guilty); HP Universal Print Drivers and Konica Minolta Universal Driver.

For some reason both these drivers refuse to run in anything other than CSR mode (Client Side Rendering). On a terminal server this can get disasterous, as they populate the same keys over and over and over inside HKEY_USERS\.DEFAULT\Printers, just with a different GUID each time. Combine that with users who have every printer on the planet mapped to their userprofile, and you get a shitstorm of printer installation every time they log off.

In this specific situation the terminal servers had millions of entries inside the registry hive.

The steps to "solve" this has been:

I suspect that one just has to do the tasks above at intervals. Maybe it could be scripted.

Do you wonder, after reading all this, if you too have the same problem? Go to %SystemRoot%\System32\config and check the size of the file DEFAULT. If it's anything larger then a few hundred MB's then it's time to put on your detective hat.

Not the answer you're looking for? Browse other questions tagged windows-server-2008-r2 printing terminal-server rds microsoft-office-2010 or ask your own question.