Several VHDX files are attached to SVR2012. One is larger than my backup drive but does not need to be included in the Hyper-V host's backup. However, I've not been able to figure out how to excluded this VHDX/volume from the backup. 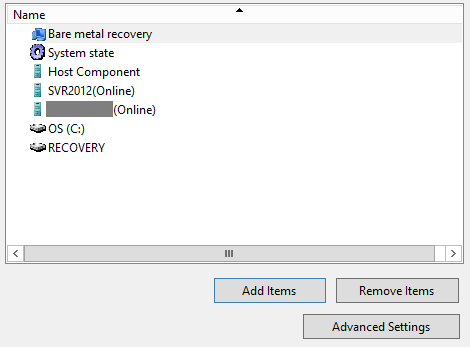 Since SVR2012's large VHDX is stored on its own separate volume F: on the Hyper-V host, I've tried excluding that volume:

However, when I save the backup schedule, this exclusion is missing the next time I edit the schedule.

How can I configure Windows Server Backup to perform an "online" backup of a Hyper-V guest but exclude from the backup one of the guest's volumes/attached VHDX files?

Windows Server Backup is a very basic tool. It just backs up whatever is reported by various installed VSS Writers. It's not going to be able to break apart a VM and deal with only parts of it.