Error connecting with RDP between Mac and Win2k3 server 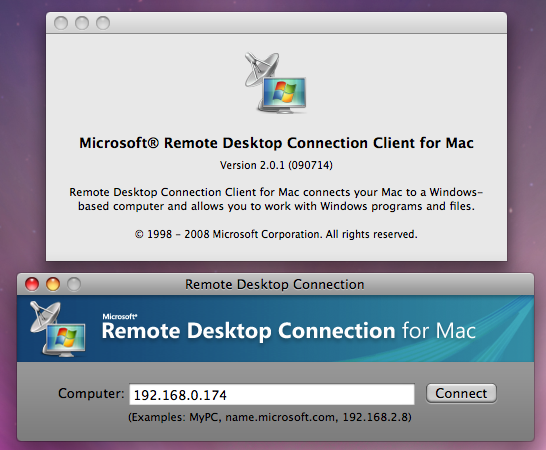 When I try to connect to a Windows 2003 Server on the same network I get a dialog saying "Remote Desktop Connection cannot verify the identity of the computer that you want to connect to". 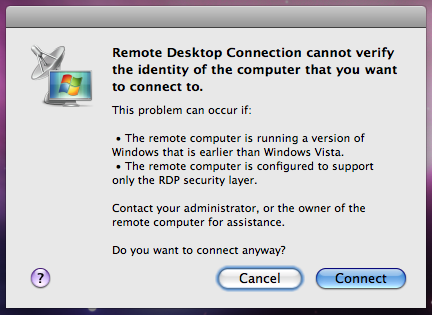 And when I press the Connect-button in the previous dialog I get the same message in another dialog:

I can connect to the Win2k3 server from a Vista machine, and it used to work from the Mac as well. I stopped working from the Mac after I did some configuration on the win2k3 server, removed and added the the connection in the Terminal Services Configuration: 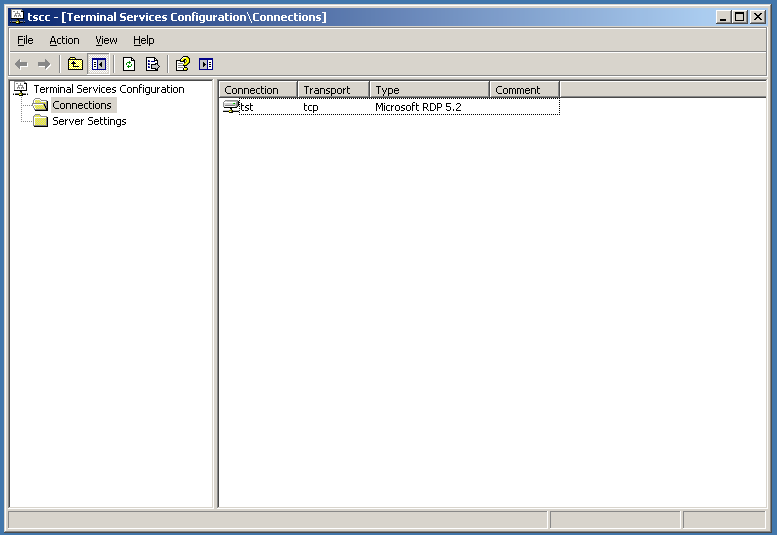 What do I need to do to be able to connect from the Mac again?

In Remote Desktop on your Mac open Preferences -> Security.

Make sure that the first 'Always Connect' option is chosen.

After that, you might want to try CoRD (http://cord.sourceforge.net/), which is an open-source Remote Desktop client that has some better tweaks and error messages.

CoRD solved my problem, and some other minor problems too :) I recommend it!

We just had this same issue with a WS2008R2 and a Mac. Connected from mac via microsofts RDP program. Suddenly disconnected with that message. Subsequent attempts at logon from Mac gave same message and immediate disconnection.

Settings on the server were as user23294 mentioned, set to compatible, and the setup has worked fine up till now (many months).

Solution was to logon from a windows client, close programs and log user off.

Then the user could again log on from a Mac.

Apparently the user session became corrupted somehow, preventing access from a Mac, but not from another Windows client.

Solved it, I changed encryption level on the connection in the Terminal Services Configuration dialog to "Client Compatible".

I was having the same problem. The authentication would fail if the user had the password saved in the settings. It's a security risk having the password saved but the error message is so cryptic and my users just can't get the hang of not saving their password when it asks to save the connection at the end of the session.

If you can accept the security risk of a saved password on the client end, then I turned off the "Always prompt for password" on the "Log On Settings Tab" in "RDP-Tcp Properties" of "Remote Desktop Session Host Configuration" -- Windows 2008 R2.

This resolved the problem for me but it's a security compromise to not alienate the Mac people.

1
2000 DC and Terminal Server in-place upgraded to 2003. RDP access is now broken
3
How do I remove a message that Mac users receive when they log on to a server (Windows Server 2003)
1
Using Apple with RDP to connect to Windows 2008, @ doesnt work
6
Windows 2k3 and RDP issue over Internet issue (RDP works locally)
2
How can I get Mac RDC client to connect to W2K3 after enabling FIPS support?
2
Remote Desktop Connection for Mac cannot log in to Windows Terminal Server if user's password expired
1
RDC to Windows 2000 Server from OS X 10.6.8 immediately crashes
0
Microsoft RDP client for mac and protocol version 7.1
0
RDP from Mac fails
0
RDP Windows server 2019