Every manufacturer seems to have different standards for what ships with their hardware; mounting rails, cable arms, power cables etc. I've got used to that for standard rack-mounted gear, but now I've been asked to spec out an IBM BladeCenter installation, and I'm not sure what parts I need.

Assuming an H model chassis and (say) 6 blades, maybe something like:

Basically, I'm open to any suggestions that'll help me understand what I need to be buying.

The options can be a bit overwhelming to newcomers.

To start with a new H-series will come bundled with the following items:

Besides your actual blades you will need the following as a minimum:

All of the above assumes that you have 6 blades with no additional I/O requirements. You may then wish to consider the following:

Finally the IBM Redbook entitled "IBM BladeCenter Products and Technology" is absolutely essential reading. It contains details all the available options, compatibility matrices and detailed descriptions about I/O use.

As I recall it (correct me if I'm wrong cause it's been a while) you can add "cheap" copper pass-through modules if you don't want to take the networking module cost up-front. That way you can access the blade NICs from the center backside - but it kinda defeats the purpose with a bladecenter.

There should be a couple of different networking module options, cheaper and more expensive depending on whether you want - say Cisco manageable level 3 routing in them or not and so on, see the tech sheets list.

Most questions should be answered by your hardware partner or vendor imho as it gives you the chance to ask more intricate questions about interoperability, licensing and additional costs.

Here's a list of tech sheets for different modules and the center itself and this is the installation user guide which is fairly detailed. 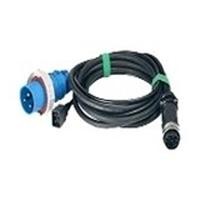 About the power cords, they're most likely not what you're used to and may need some local help from your electrician - order the specific BladeCenter H power cables. They each need three "standard" UPS power outlets which powers different parts of the chassis (so some can be left unplugged if you've only filled half the center with blades as I recall). During startup or when the management module is rebooting/offline - the blowers are uncontrolled, creating a decently sized storm and drawing a lot of power.