I've tried numerous solutions of other posts, but nothing seems to work for me, I always get a 404 error, when trying to let nginx serve static files of my flask application. Somewhere in between all those attempts on getting it to run, I also had a 403, but I can't reconstruct it. This is my current setup:

The app is in: ~/development/Python/flask_nginx_gunicorn/, which is supposed to be a test project for getting everything running, understanding nginx and so on. It has the following structure: 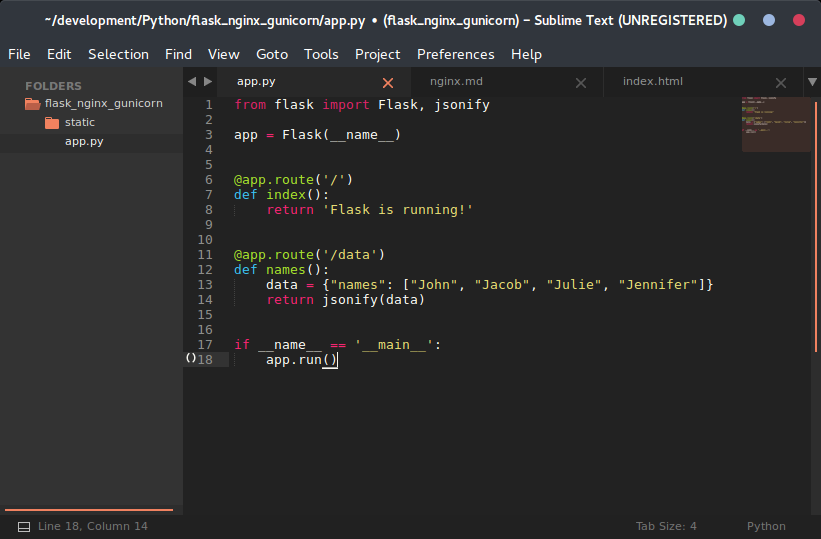 So there is nothing more than a file called app.py, which configures a few routes and an index.html in the static folder.

I configured my nginx as follows:

At the end there is an include for the sites-enabled sub directory. In that directory I have a file called flask_project. In that file I have the following configuration for my project:

I started nginx using the command systemctl start nginx. When it is running, and I do a ps -aux | grep nginx, I get the following output:

So I know it is running. I used to get an error in the log, telling me nginx couldn't bind to a specific port, which was caused by SELinux only allowing certain ports for it to bind to. I fixed that using the command semanage port --add --type http_port_t --proto tcp 7777.

After each change I always ran systemctl restart nginx, to restart the nginx server, so that it can reload its configuration.

I use gunicorn app:app -b localhost:8080 to run my flask app.

My guesses are the following:

I've tried to get it running for two days now, but none of the configurations I found worked for me. I also tried the following two commands, which were suggested in other places:

What's wrong with my configuration?

In my /etc/nginx/ directory I have the following structure:

I am running a Fedora 22 here.

This is over a year old at this point so I'm sure you've worked this out, but in case anyone else sees this:

Not the answer you're looking for? Browse other questions tagged nginx python fedora static-content flask or ask your own question.