I would like to add a 4th VM running PfSense, through which all the Internet traffic inwards and outwards will go through, to the 3 VMs I've already got up and running.

Something along the lines of the 3 VMs having an internal private network (say in the 10.10.10.0 range), using the pfSense firewall as the Gateway. One way this might work is if I created a LAN only Network. Each of the 3 VM NICs will be connected to this LAN only Network (using 10.10.10.100 as Gateway suppose).

Do I need to set the gateway for these VM NICs to the PfSense LAN only IP? Or do I use vkernel and change the gateway from the default public IP to 10.10.10.100 (Tried this once, and I lost connectivity to ESXi server)?

WARNING about your setup

I would advise you caution using this system in this setup, if you have only one physical adapter and then only one uplink to the universe from the system. I would suggest going and purchasing an extra adapter for the system, and add that to your system - this way you can still have a backup physical connection.

The other headache you're going to be facing with only one uplink is that you will have to move your VMKernel to the pfSense network, and then you won't be able to have that VMKernel web-accessible. You will then need to set up VPN on the pfSense so you can VPN into the network to access the ESXi management network through the pfSense.

Some fairly important notes on my answer, of which you should take note

With my obligatory warnings out of the way, this is really not as difficult as it seems.

With physical equipment, and a physical pfSense appliance, you will have a WAN port and a LAN port. Your WAN port will be connected to the uplink to the world. The LAN port will be connected to some type of switch and the rest of your LAN infrastructure on the internal network. The pfSense WAN will be configured for the WAN IP address (static or dynamic), and the pfSense LAN will be configured for the LAN IP address with static settings, and you either turning on DHCP for the LAN or having every single system static IP'd with the default gateway pointing at that LAN.

With everything on the ESXi, we have to emulate this, but it's still the same concept.

Given you already have VMs, you already likely have a vSwitch0, which in turn is linked to physical system uplinks, like this, but with VMs in the "VM Network" group, and with a vmnic that actually is connected to something:

Importantly from this point forward, anything on vSwitch0 will now be considered on the "Uplink", as this has physical NICs on it. We can change this later. The pfSense WAN virtual NIC will be on this switch.

Create the vSwitch1, for the pfSense LAN

Here's where we'll create the LAN. If you've created vSwitches before, you can easily breeze through this part, but effectively, we are adding a vSwitch for VMs, not the VMKernel. The key here though is to not connect a physical adapter to this network, since we're running it through pfSense, which will be a virtual NIC connected into this vSwitch. I named the new port grouping here "pfSense LAN". 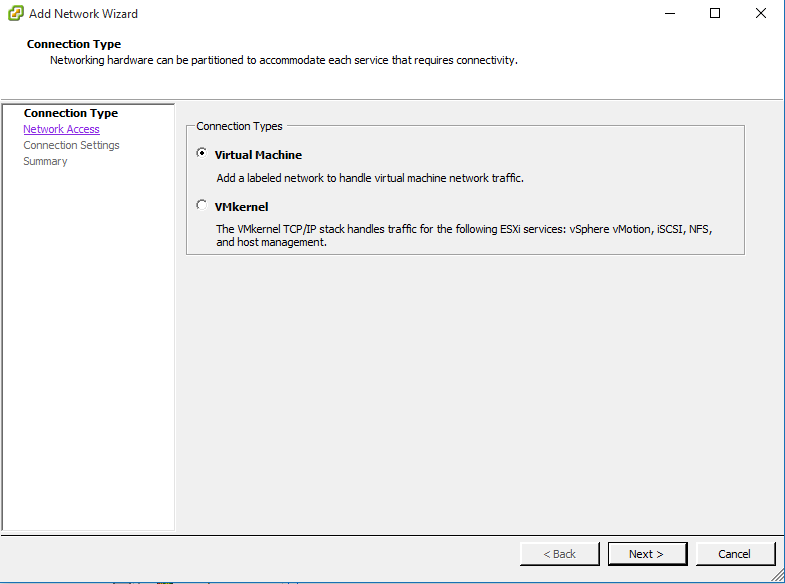 Deferred until later: Move the VMs into the pfSense LAN

Because this may be a system where you cannot have downtime, I'm going to have the VMs moving to the pfSense LAN as a later step.

When you set up the pfSense, you need to make sure you give the VM two virtual network adapters (vNICs, from this point forward in this answer). They each need to be on the individual network groups we have, one on vSwitch0 ("VM Network" as earlier), and one on vSwitch1 ("pfSense LAN"). I use E1000 type adapters - they seem to work well with the FreeBSD based pfSense system. 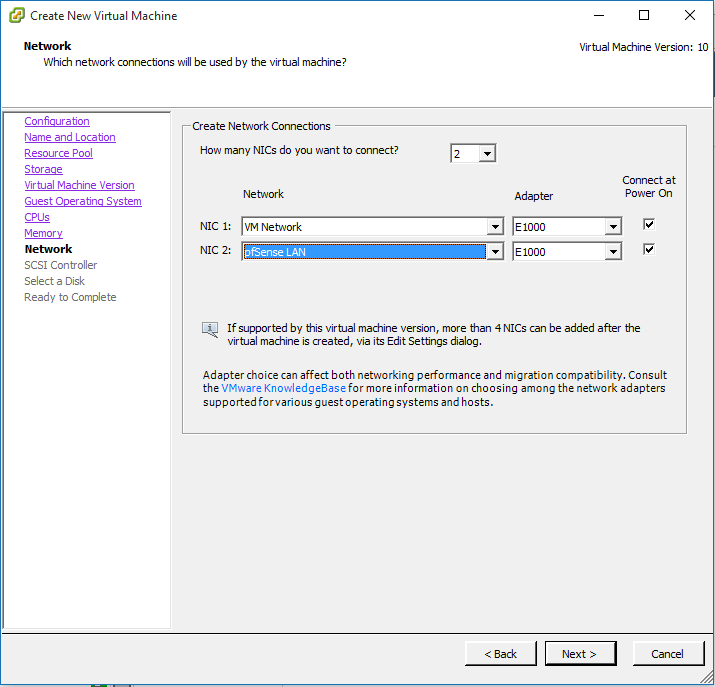 This is optional, but I highly recommend this. Make sure you have a VM on the "pfSense LAN" network where you can access the GUI so you can access the pfSense after you set it up. You'll need this to configure the pfSense Firewall, unless you know what you're doing on the CLI for pfSense (I will not add the pfSense Setup steps here, as that's a different question, basically.)

ONLY move to this section AFTER you've configured pfSense for the LAN and WAN settings, and set up firewall rules so you can start with an "Everything can go out to the world from the LAN" setup, and then start adding whitelist items and firewall rules before locking down.

After you've configure your pfSense, we come back to the part where you may have downtime if you're having to have access from the outside in to the VMs.

Move the VMs to the pfSense LAN

Basically, edit the network adapter settings for each of your VMs that are on the default "VM Network", and set them to be on the "pfSense LAN" network segment. If everything is static IP'd, then you should be all set, just make sure on the VMs to set the "gateway" to be the Static IP you set on the pfSense LAN adapter. (That way, the VMs can route through the pfSense).

Once you're done, and your VMs can connect to anything outside through the pfSense (by setting the gateway correctly on each machine), then you just need to configure the pfSense to permit connections inbound to the machines from the outside where necessary.

And now you're done. The pfSense should be able to reach to the 'net, and so should the VMs. If you really care about "VM Network" being present, add a group to vSwitch0 called "pfSense WAN" and then edit the pfSense network settings to have the "VM Network" vNIC connected to the new "pfSense WAN" group.

The only thing we haven't adjusted here is where the VMKernel sits. While I am not going to do this here, because it will break my system heavily, you theoretically can add a VMKernel to vSwitch1's properties, and give it a static IP in the "pfSense LAN" if you want the management to only be accessible form the "pfSense LAN" section of the network. Once you confirm that you can reach in through, there, you can remove the VMKernel on vSwitch0. If everything starts breaking, though, then you'll have to have physical access to the machine to reconfigure the management network through the machine itself.

Effectively, with regards to ESXi and the topology with regards to your VMs, pfSense, and the uplink, you will end up with something like this, focusing solely on the ESXi part. 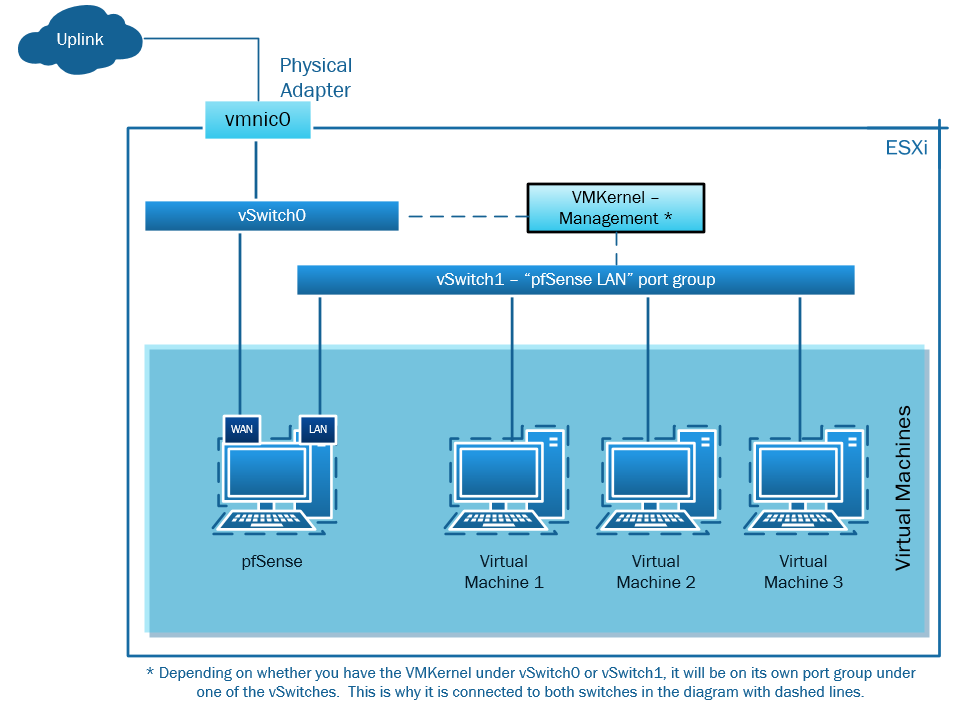 Not the answer you're looking for? Browse other questions tagged vmware-esxi vmware-vsphere pfsense vsphere-client vswitch or ask your own question.