I've setup an Azure virtual machine using Ubuntu 16.04LTS but I'm struggling to get remote desktop to work for it.

I've setup the endpoint as follows: 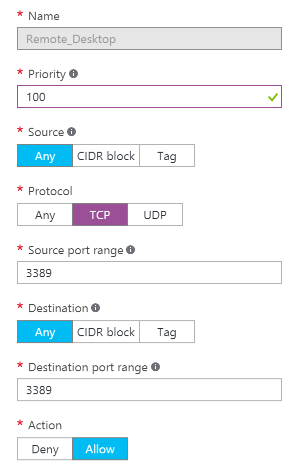 I've also setup and started xrdp as well as installed xfce4. For reference, here's my command history since creating the VM:

Even after having done this I can still only SSH to my Virtual Machine. The RDP client is timing out with the following:

What am I missing?

ubuntu remote-desktop azure
Share
Improve this question
asked May 20 '16 at 1:32

You have your source port locked at 3389. This should be set to *, as it represents traffic origination port.

Your other settings look fine.

Not the answer you're looking for? Browse other questions tagged ubuntu remote-desktop azure or ask your own question.

0
Installing gnome on Linode with Ubuntu 9.10 x64 - remote VNC/RDP
25
How to set up Mod_WSGI for Python on Ubuntu
1
How to install a desktop environment onto Ubuntu Server — but without internet access or a CDROM?
1
Ubuntu 10.10 Maverick Server — apt-get install commands fail
5
How can I automate a new linux server's initial setup?
2
What is the best way to create a reusable Azure Virtual Machine Image?
0
How to setup RDP connection to a Linux (Ubuntu Server) VM in Azure using SSH tunnel?