Why is my Server 2012 R2 DISM failing to repair corruption

Can anyone lend me some assistance in repairing my server 2012 R2 image?

I have a 2012 R2 VM, and have attached the install DVD we used from our datastore. I am then running the command:

I can see the WIM exists in that location: 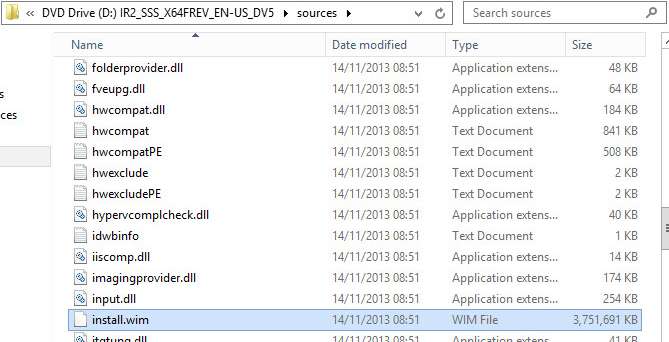 The tool runs and stays at 20% for a while, then fails with an error that states:

Followed by plenty of lines that say:

Can anyone tell me why it says the files cannot be found, when I am pointing at the same install.wim that was used to install Windows in the first place?

I even tried to extract the WIM to a location on the C:\ drive and use that, but failed with the same error.tel

Running /startcomponentcleanup results in error 14098, and DISM log says 0x80073712, which means CBS manifest is corrupt? Solution to which, laughably, is to run /restorehealth :P

I know this is late but have yet to find an answer to this. Your ISO Server 2012 R2 will have more than just Std server 2012 r2 it might have a core install too and maybe datacentre install. You have to change indexes for the win command to work with your version.

on my 2012 R2 stand/datacenter media it has 4 indexes, to repair I need to make sure I use the right one using the below command I can check the index name

so for my install I use

In the end, I tried a different repair source (Another 2012 R2 ISO I had, same version number I think but from a different download source).

I still got some component store corruption messages in the CBS log, but it seemed to fix enough to allow Windows Update to start working again.

Think I will do a restart and try an online repair using WU as the repairsource.

I ran the below command to verify my install type:

and then repaired with: