My customer is using a NETGEAR FVS338 for internet access and s2s-connectivity for his two locations, which works flawlessly.

He (and a couple of his employees) also use the ShrewSoft VPN software client to connect to the office while on the road.

The roadwarriors (and my customer in his homeoffice) use the VPN Client to connect to his company network and use a RDP session to a terminalserver in the office to work with our applications.

Today he reported the following problem:

To mititgate this problem I made sure that both users are using discrete VPN policies with different Remote-ID values as seen by the router (resp. different Local-IDs when viewed from the VPN client).

The clients share the following settings (they actually don't share those because as I said before these are different policies, but have the same settings configured):

The only thing that I can think of being a problem is the Local Traffic selection so that somehow the Netgear Router cannot differentiate between both clients and drops one of the connections (or let it timeout).

Is this realistic? If so, could this be mitigated by setting two discrete IP adresses in the traffic selection of the router and configure the virtual adapter on the client accordingly?

Are there any other hints you could give me to troubleshoot this?

Swap the local and remote subnets round, in the VPN policy. if you are defining them on the FVS338. I'd also double check the Mode Config screen to confirm that there are plenty of remote IPs available.

Shrew is IPSec VPN client, which is may be limited by NAT existence between client(s) and server. If same NAT is traversed by both clients, that could be a good reason for the first session to stop working

To resolve this change the IP in VPN client for each client. 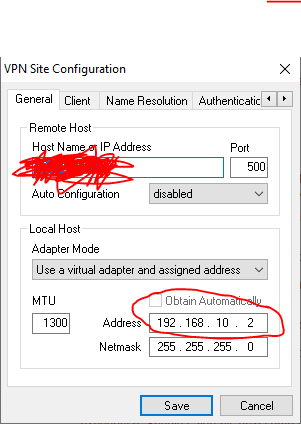 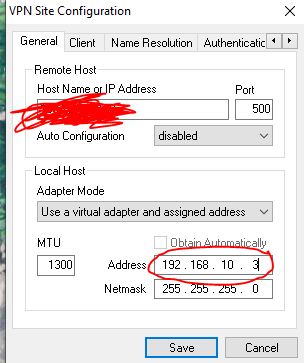 Not the answer you're looking for? Browse other questions tagged vpn ipsec netgear shrew vpn-client or ask your own question.

0
Cisco 1841 to Netgear FVS318 VPN connection
0
VPN still working after rebooting without client - DrayTek client shows "No Connection"
0
How can I connect to a Cisco ASA5540 from Windows Server 2012 over IPSEC?
1
Remote Desktop Connection to user on VPN
3
Windows 10 built in VPN
1
How to configure strongswan peer-to-peer vpn tunnel using public IP as encryption domain?