cisco7200 router responds to icmp messages not addressed to it

I am trying to play (in GNS3 if that matters) with a very simple topology of three routers connected via hub. The time I am trying to ping from one of the router to another say R1 to R2. The R3 replies with ICMP redirect message causing R1 to re issue the ping request to R2. The loop continues infinitely wrecking havoc on simulated network. The question is why R3 replies to R1 for ICMP message not directed to it (ping is from R1 to R2).

UPDATE: The problem is not ICMP redirect but the fact that any router will place the ICMP ping packet it cannot handle back to the interface it arrived from flooding the network till TTL expires.

This happens because of your topology. I'm going to assume that you're pinging on the 192.168.0.0/16 subnet? Even if you are pinging the outward facing interfaces (10.1.0.0/16, 10.2.0.0/16, 10.3.0.0/16) on the routers, they still route through the 192.168.0.0 subnet on the way to their destination. The reason why this happens is because you are using a hub to connect all three machines on the same subnet (rather than a switch). The nature of the hub, by default, is to broadcast all messages received on all of its interfaces (as opposed to a switch which learns via responses which machines are connected to its interfaces).

So, the ICMP packet departs R1, and when it hits the hub, it's broadcast to R2 and R3 (as well as R1). This effectively duplicates the packet in triplet. The duplicate packets hit R1, R2 and R3 and trigger the forwarding rule:

Effectively bouncing the packets back to the hub. Rinse and repeat and you have a flooded network of multiplying ICMP packets. Solution: change the hub to a switch or implement the no ip redirects rule as suggested by Ron.

A hub is a simple device that only knows how to do one thing: broadcast what it receives on all interfaces. When a packet comes from one of the three routers at the center of your network, the hub does what it knows how to do: 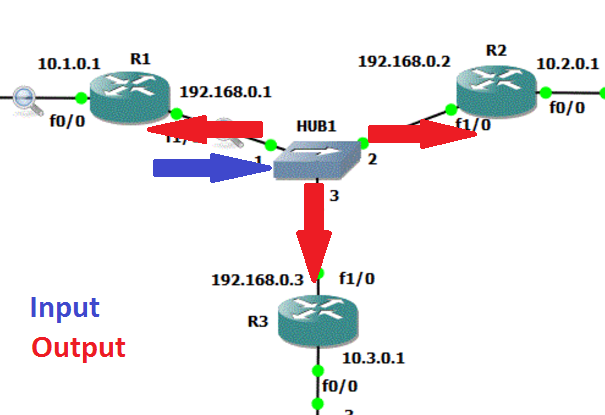 The ICMP protocol has some peculiar characteristics compared to other network protocols. It sits atop the Internet (or IP) layer, which is layer 3 in the TCP/IP model. Many people assume at first glance that it would exist in layer 2 with the other application protocols, but it doesn't. This is because ICMP was originally designed to be an error messaging protocol. The ICMP protocol reports meta-data about the IP layer in case of exceptional behaviour such as packet loss or unreachable destinations. So, when an ICMP packet comes into a device (such as a router), the device checks to see where the ICMP packet it destined, and if its destination is the device itself, it responds with a new message (e.g. PING REPLY). If its destination is another device, it decrements the time to live (TTL) and sends the packet on its way according to the device's routing table.

There is a third piece of the puzzle to consider, and that's the Cisco device's routing table. We know how the routing table looks after the network has been running for awhile. In response to your question:

Why would any router route through the 192.168.0.0 through the destination network (say 10.1.0.0) is directly attached to it and not reported via any router.

This is due to the network discovery mechanisms on the Cisco routers. Pay attention to these lines in the routing table:

The O at the beginning stands for OSPF, which is a proprietary routing algorithm that populates the routing table on the Cisco device. I'm not sure of the details of how the routing table is populated, but it's kind of irrelevant. Each router knows that it can access the outward facing interfaces of the other two routers by sending traffic through the 192.168.0.0/16 subnet. So, when a packet destined for any of those interfaces (say, an ICMP PING REQUEST) comes into the router from the hub, each router knows it can reach the destination network through the local subnet. Hence, as long as the packet is not bound for the device itself, these packets will have their TTL decremented and they will be forwarded back to the hub (the following diagram happens on every device which receives a packet not bound for itself AND not sent from itself): 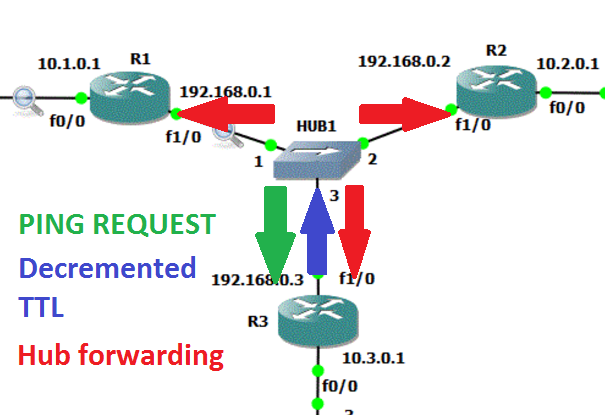 As you can see, the three things together create a loop which keeps forwarding and generating duplicate ICMP packets until one of the following things happen to the packets:

There may be a few generalizations in my answer, but you get the picture. More packets are generated by the hub than are consumed.

When you first plug in a switch, it's dumb just like the hub is. The primary difference, however, is that the switch can learn where packets are coming and going from by paying attention to the traffic coming through the device. When a packet is first encountered by the switch, it doesn't know which interface the destination is connected to, so it forwards it to all its connected interfaces. When it does this, it records the source and destination IP it its switch table. When a response coming from that destination (and destined toward the original source) is detected, it completes the entry in the switch table. After this, the switch knows which IP addresses are connected to corresponding interfaces. From this point on, when it accepts a packet, it only forwards it out the interface where it knows the destination is connected. This eliminates the duplicating packet problem.

MAC vs IP address and Packet Routing with Ethernet vs PPP

Why would router R3 that receives packet with MAC destination of R2 (sent from R1) would respond at all on ICMP level?

Packet Routing with Ethernet and Other Protocols that Leverage MAC Addresses

Packets may start with empty or BROADCAST destination MAC addresses (depending on the hardware standard). With the Ethernet hardware standard (and a handful of others such as Wifi), when any packet is sent out from a router or host machine, the destination IP is checked against the Address Resolution Protocol (ARP) table (this is the table that keeps track of MAC addresses). If a match is found against a locally connected machine on the same subnet, then the MAC address field of the packet is updated before it's sent out on the network. HOWEVER, if the packet is destined for an IP address on a different subnet, the MAC address is set to the MAC of the Default Gateway, or a gateway to which it knows it can reach the destination IP (because the machine knows that the destination is on a different network).

Packet Routing PPP, SLIP and other Hardware Protocols that do not Leverage MAC Addresses

Generally, if two routers (gateways) are connected directly with no routers in between, this is considered a "peer-to-peer" connection. Generally, these types of connections are not Ethernet, and use other standards. The most common of these standards is the Point to Point Protocol (PPP), but there are others such as SLIP and PPPoE (PPP over Ethernet). If the router considers the "C"onnected or "O"SPF entries in its routing table as peer-to-peer connections, then the MAC address on the packet could be set to empty values, or be set to BROADCAST, or they may use dummy values, or not even use MAC addresses at all (this could differ depending on the standards of the hardware protocol connecting them, however, which I am not familiar with in this case). In order to tell exactly what's happening, you would have to learn more about the Cisco router hardware standards and how they deal with MAC addresses and peer-to-peer connections and which hardware protocol they are using (which most likely will be PPP by default).

Implications in This Scenario

As packets are transported over networks, each receiving router does one of two things (depending on the hardware protocol used):

This happens at every hop along the network until a router detects that the destination IP is on its local Ethernet (or other standard that uses MAC) subnet. This is effectively how addresses are translated at the hardware or physical layer. So, to answer your question, in this scenario it appears that all R3 knows is that the packet is destined for another network that it can reach through its f1/0 interface. It doesn't care what the MAC address is because it's using a protocol that doesn't leverage MAC addresses. According to Microsoft:

Looking at the thread the MAC header that is seen on Ethereal is the dummy Ethernet header added between WANARP and NDISWAN. This way the network monitors (like ethereal) sees the PPP interface as an Ethernet interface. But on wire ... the packet will not contain that Ethernet header, but instead it will be TCP->IP->PPP headers

Notice there is no default gateway in your routing table:

This, along with the fact that the primary entries are listed as directly connected, suggests that it would treat all of its connections as peer-to-peer connections (and therefore MAC address agnostic).

As an aside, you might wonder why MAC addresses aren't used for PPP or, more generally, for network addressing in general. Check out this post here. The first comment on the accepted answer confirms what I've been saying:

I would have added that MAC addresses are ultimately used in IP communications once the computers determine they're on the same subnet ... Layer-3 / IP addressing is mostly used by routers and only used by the host to determine if the destination is on the same subnet. (Credit to Sean C.)

185
Why couldn't MAC addresses be used instead of IPv4|6 for networking?