Getting a file lock in Ubuntu Server

I have a folder in Ubuntu Server, where users from different client machines (also Ubuntu) can edit the files (via FileZilla, but any other will do). However, when one user is editing one file, this file should be locked so others can't edit it at the same time. This should be the expected behavior (and it is, elsewhere). How to accomplish this in Ubuntu Server 14.04? Looks like an easy, even obvious task, but I just can't find it anywhere. Google only gives me "how to unlock a file locked by someone else".

Following Lmwangi's suggestion, I'm trying to create a bash script to automate the task. First I used NFS to mount an image of the server folder on my client machine. Then I created the following script on the server folder:

Still not able to test it.

FTP (filezilla) does not support locking. Perhaps if you set up NFS or SaMBa then used a normal file editor locking would work.

should be locked ... the expected behavior ...

Your understanding of file locking semantics on Linux is incorrect. From the reference link given, you are basing your assumption on Windows file semantics. They dont apply on most unix based systems.

I couldn't find a hugely authoritative source but wikipedia however it is trivial to test.

(Wikipedia is actually wrong about running programs, so I edited it!)

On Linux, its normal operation to allow multiple writers and readers to operate on the same file at the same time.

The only time this is not true is when the file itself is an executable object that is currently loaded and you request write access.

File Locking is done as a non-mandatory option and is done via fcntl, flock or lockf which all the applications using the file must support and be using the same locking method for it to work.

Another method often employed is to create a new file which is a copy of the old file as a temporarily named file, then rename it over the top of the old file. This works as all renames are atomic on posix compatible filesystems -- people will see either the old file or the new file but not a mix of both.

If you want to achieve multiple writers editing the same file, you'll probably need to go with a method like git so users can push the changes to a change repository.

Or alternatively just use a Windows system which does the locking you understand if this feature is that critical to you.

Depends on the mode of access to the files. For example,

First subshell acquires a lock for 20 seconds and is pushed to the background. Any other process (the second one) fails immediately if the lock is acquired.

The reason is simple: when editing a file via FTP protocol, you really are not editing the server-side file itself, rather you edit a downloaded copy that is than re-uploaded with the same path/name of the original file.

On the other hand, protocols as NFS or SMB are block exchange protocols which enable direct editing by the client-side software.

In short: if you need locking, FTP is not the right tool.

No solution here, just a link to a more detailed explanation I found. 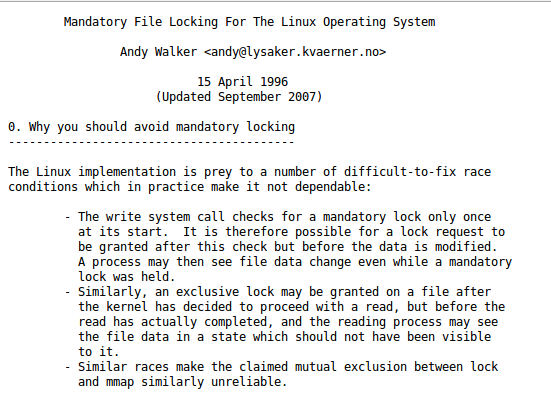 Not the answer you're looking for? Browse other questions tagged filesystems ubuntu-14.04 or ask your own question.

9
When an Excel file is locked on a network share, how does it know who locked the file?

5
mount using nfs4 giving no such device error
1
Ubuntu ProFTP delete partially uploaded file after connection fail on client side
1
File Lock on Windows Server
0
Ubuntu OS recovery – accidentally deleted ld-linux-x86-64.so.2 from /lib64 folder in Ubuntu 14.04
2
How to fix UI errors after installing phpMyAdmin on Ubuntu ServerPilot app
0
Ubuntu - Allow access to subdirectory and files under a directory, but not give access to the directory itself?