I was experiencing major issues with SSSD today where newly created users were unable to logon. After troubleshooting I found that the issue was in the AD user object security permissions. Seems like someone from my team recently changed the permissions for authenticated users and unchecked the read checkbox.

The weird thing is that when I enable read permissions temporarily, id the user after which all works fine. Then I uncheck the read permissions for authenticated users and it seems everything keeps working.. (Of course after emptying the sssd cache) Any insights on which permissions are minimum required by which user are welcome.

Unless you specified ldap_default_bind_dn and ldap_default_authtok in your sssd.conf, it will default to an anonymous bind to the specified LDAP server to retrieve the schema and objects. Anything else, like a logon, will use the provided credentials.

After a lot of research we discovered that (as I already mentioned in the question) it is the Linux server computer object that is actually authenticating. Granting read permissions on the user objects to the computer object enables id to work and retrieve all the user groups.

But as we didn't want to grant read on all users, after much trial and error we found that there is acutally only one mandatory required permission and that is Read remote access information. From the moment the Read remote access information checkbox is checked (see screenshot) it is possible to use the ìd command to get all the groups. SSSD is then able to check if the user is in the groups configured with the simple_allow_groups directive in /etc/sssd/sssd.conf 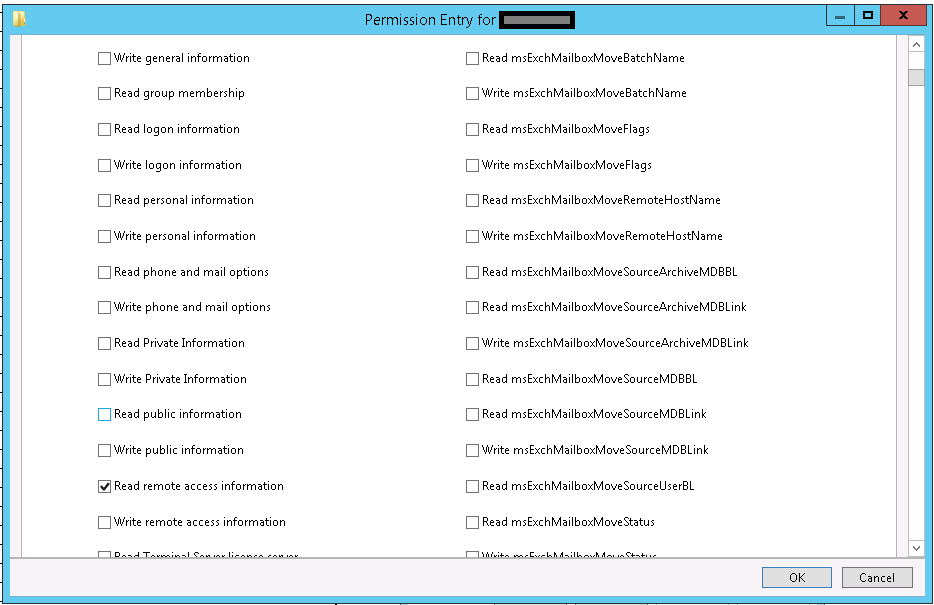 Not the answer you're looking for? Browse other questions tagged linux active-directory sssd or ask your own question.

21
What permissions are required for enumerating users groups in Active Directory
0
How to access AD directory user which has no read permission
0
SSSD for LDAP user authentication only (just bind) on Ubuntu, local databases for uid and groups
0
How to restrict user access via SSSD AD provider?
0
Unable to add local user on system authenticating to ldap using sssd
1
ldapclient authentication with sssd
2
sssd active directory password integration not working