How can I get rid of the “Do you trust this printer” message box and add my printer via GPO?

I have been bashing my head on the desk trying to get this printer to be installed via group policy! For some reason, I simply can NOT get this printer deployed with GPO. I have tried setting it up to deploy via Computer Configuration->Policies->Windows Settings->Deployed Printers, as well as Computer Configuration->Preferences->Control Panel Settings->Printers and User Configuration->Preferences->Control Panel Settings->Printers. I have also tried going through my Print Server Management console to add it via user and/or computer targeting. I have tried ALL KINDS of ways and nothing is working. I followed a bunch of tutorials and watched a bunch of videos just to make sure I was not missing something but it really is a simple task (in theory)... It just will not work. 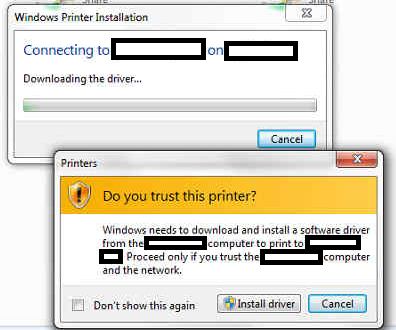 I have tried everything I can think of to get that message box to stop popping up. I dug into it and found that if I was to edit a GPO called Point and Print Restrictions located at Computer Configuration->Policies->Administrative Templates->Printers and was as at User Configuration->Policies->Administrative Templates->Control Panel->Printers you could try setting the policy to Disabled or Enabled and choose Do not show warning or elevation prompt for the two Security Prompts listed at the bottom of the policy settings.

Well that was a bust too...

I did find that if I tried to manually install the printer by going to the unc and typing in my Administrator credentials it would download the drivers from the server and install the printer (as expected). If the user tried to remove the printer and was successful somehow as soon as they would log off and back on the GPO would do what I want and add the printer back. But it required me to add it manually the first time on EVERY PC.

After testing this and then removing the printer from the GPO, then logging off and on again. I could run the command printui /s /t2 to bring up a GUI that would allow me to remove the installed drivers with ease to put the PC back to it's original state (asking for Administrator credentials). Also something else I learned was the printers were stored in the registry located at HKEY_LOCAL_MACHINE\SOFTWARE\Microsoft\Windows NT\CurrentVersion\Print\Connections. When I was trying to remove a printer and it told me I couldn't, I just went to that registry key and removed the GUID key of the printer I was trying to delete. Then just restarted the Print Spooler service and boom it was gone. This was no help getting me get to where I wanted but it was helpful in removing the printer during debugging the issue.

I read somewhere that maybe the cause is some type of windows security update that changed something. It was released because of some article showing how you could pwn an entire network if you were able to pwn a single printer. Something about when users connected to the printer and downloaded the drivers it would install injected software and run on the machine, etc...

My main goal is to be able to deploy this printer to a set of users in this OU with the GPO I'm using. But everything I try requires an Administrator to be logged on to do it (at least the first time). Does anyone have any idea why my printer will not automatically add itself via the GPO and also how do I get that dang "Do you trust this printer?" message to go away?

The "fix" is to download trusted, package-aware print drivers from the printer manufacturer; however, since not all manufacturers will produce these drivers, there is a work around that I found here: Cannon Forum - Package-Aware Print Drivers (Note: This does not work for unsigned drivers, but there are plenty of tutorials out there for self-signing a print driver.)

Here are the steps to get around the issue:

I am in the process of deploying this fix myself; however, since it requires a restart of the print server I cannot test it until this evening since our print server also runs a few networked applications.

An alternate solution to the registry edit is to edit the printer driver INF file and add the following:

Aside from this, double check the Group Policy settings for Point and Print Restrictions and Package Point and print - Approved Servers.

Microsoft Security Bulletin MS16-087 detailed a security issue where a rogue print server could inject malicious code through a "man in the middle" style attack. Security update KB3170455 was issued on July 12, 2016 to fix it, which then messed with the distribution of print drivers from the print server.

Thanks for the registry hack to get a driver come up as packaged. That alone may not do the trick. Please ensure that you set the Computer policy Package and print settings to enabled along with the print server concerned.

Not the answer you're looking for? Browse other questions tagged active-directory group-policy windows-server-2012-r2 printer network-printer or ask your own question.

7
Driver installation not working when deploying printers via GPP
6
How to use AD/GPO/Print Services to “push out” a new printer driver to replace a broken one? How did my server get a broken driver?