Is there a difference between RJ-45 plugs for Cat-5e and Cat-6?

While looking around for some plugs to use for running and crimping some bulk Cat-6 cable, I noticed the online sites show RJ-45 plugs for Cat-5e and separate ones for Cat-6. Is there actually any difference between the two? The Cat-6 plugs mention having an "insert", but does this really matter?

Last time I needed to crimp cable, it was for Cat-5e, which is why I'm asking this now. Thanks!

"It depends". To the best of my knowledge, the standards themselves do not mandate any changes to the plugs. I would guess -- but I'm not 100% sure -- that the standards are mainly concerned with externally observable characteristics of the cabling such as crosstalk and attenuation, and leave the internal implementation details mostly up to each manufacturer. Having said that, the following comes to mind:

Regarding OP's link to a no-name plug, I think it's mostly marketing. While there can and should be differences in how plugs are designed, in the no-name space I don't think you'll find a consistent set of differences between no-name Cat5 and Cat6 plugs.

Sorry, I know this is resurecting an old thread, but I felt like I needed to put my 2 cents in...simply because I've gone through this recently at my new workplace and am looking into "testing" all the lines that have been run in the last 10 years.

CAT5, CAT5e and CAT6 share a few common requirements. Among those things are the RJ45 connectors (clear plastic male plugs as well as the female jacks). The connectors are used for backwards compatibility. With the use of RJ45 connectors we are then forced to use the familiar 4-pair signal wire. Externally everything looks the same. It has to in order to be physically compatible and give you that satisfying "click" when you plug things in.

Internally, much tighter specs need to be adhered to ensure conformity to each of the standards. Each iteration of the spec from CAT5 to CAT6 simply makes for more stringent requirements. One of the CAT6 specs requires separation distance of the twisted pairs to prevent cross talk. The most common way by manufacturers to achieve this distance is a plastic insert that runs the entire length of the cable. The plastic insert looks like a "+" sign if you crossection it and each of the 4 pairs of wire then can fit in each quadrant of that insert. It's like having 4 workers separated in cubicles (each pair of singal cables being a worker) and allowing said workers to carry more private phone converstation than if the cubicle walls didn't exist. 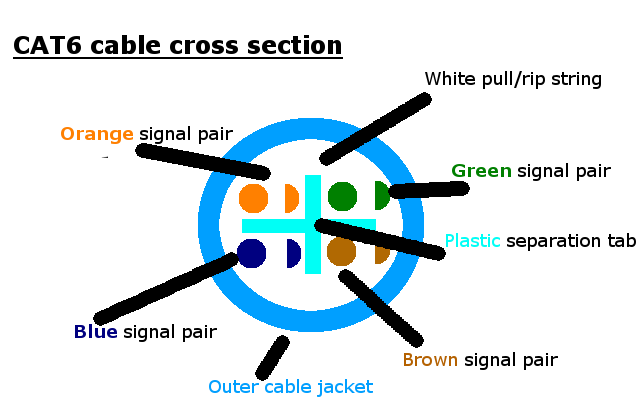 Now what happens when you open that cable up to field terminate it into an RJ45 male connector? If you were to use the CAT5e connectors that have been arround FOREVER, each individually coloured signal cable was not distanced when terminated. They were right next to each other...many times touching. I always thought how magical it was that I could simply lign up and pinch the wires between my thumb and index fingers and shove them into the connector and be able to rely on small guides to keep the cables in check. Very seldom, I would look into the connector and see that my colour lign up had gotten "guided" into the wrong channel. Other times I've done troubleshooting on a network connection for a computer and it's turned out to be a simple patch cable problem. Replacing the cable fixed it. Inspecting the cable afterward showed that it was miswired. So, the old connectors allowed cock ups like this and as well, allow the cables to move horizontally to come close enough to each other again to create this "cross talk" phenomenon. If the singal wires were put into the connector and checked before termination, miswiring could be prevent. Cross talk can occur even after termination though. That cubicle shaped separator that added so much cost into the length of the CAT6 cable would then been negated if used with a CAT5e male connector. Manufacturers then added a tiny, rediculously annoying piece to the male plugs to fix this and be in conformance to CAT6 separation requirements. The additional piece is a template which forces you to first put all the coloured wires into it, ensuring separation of the signal wires and prevention or horizontal and vertical movement after termination.

Why is cross talk such a problem? Cross talk is really just "leakage". The same ability of ours to send a tone down a wire and listen to it through induction is the effect of one wire leaking it's signal into another wire adjacent to it. Receiving equipment would get confused and sometimes ask for retransmission of the data packets being sent. This means lost bandwidth as the available bandwidth is being used to transmit the same data twice. To get that 10Gb, you can't have signals being retransmitted to often.

On top of the requirement for that reduced crosstalk, the data is sent at 150% greater rate. 250Mhz for CAT6 as opposed to 100Mhz for CAT5 and CAT5e. You now need thicker copper cable to create less resistance of electrical signals. For that CAT6 cable from most manufacturers has a slightly thicker gauge (as opposed to more pure copper).

There are differences in the female plugs as well.

All things said, if all you want is gigabit transfer speeds, you can mix and match CAT5e and CAT6. If you however NEED the 10Gb speeds that proper CAT6 can provide (upto 55 metres), you must not only use the proper cables and connectors, but after termination you MUST VERIFY using testing equipment that the connectors were terminated properly, and that their cable lengths conform to limits. The testing equipment goes beyond the $20 ebay testers. The testers range anywhere upwards of $500-$3k. Then there are certifiers as well...$9k+ which some institutional, government etc require you to use to guarantee conformance.

I just want to add one thing that nobody else has mentioned yet. There are also different plugs for use with either stranded or solid wires. Although you may get away with using the wrong one it is preferable to ensure the correct one is used, as it will give you more reliable cables.

Physically they may look the same but if you want an actual Cat 6 cable it's very unlikely you are making it yourself.

The tolerances for Cat 5e, in terms of amount of un twisted cable you could have in the plug, were tight already. Cat 6 and you don't really stand a chance.

You certainly can't make one with existing Cat 5e tools.

However it is worth noting that unless you are planning on pushing 10G ethernet over them ( up to 40M ) then you might as well use a Cat 5e cable.

Edit: Also I seem to remember when we kitted out a new data centre there is a recommended minimum total length of 15m which is mentioned here.

Also from the above

Will contractors be able to make their own patch cords?

Category 6 patch cords are precision products, just like the cables and the connectors. They are best manufactured and tested in a controlled environment to ensure consistent, reliable performance. This will ensure interoperability and backward compatibility. All this supports patch cords as a factory-assembled product rather than a field-assembled product.

Given the slightly lager gauge wire of CAT6 the RJ45s offset the wire entry, where the CAT5 RJ45s wire entry is flat. If you look at the RJ45 front on i.e. as if you were going to plug it in to your eye, you will see the alternate up/down wires of a CAT6 RJ45, as opposed to the flat configuration for CAT5 Rj45s. Note this is for field terminated RJ45s, manufacturers can produce products of greater tolerance and as such can be flat.

There are two types of RJ-45 (AKA 8P8C) plugs used to terminate Ethernet cables. Cat-6 and Cat-5e should work with either type. The only thing you have to look out for is the crimper/plug combination. If you have used your current crimper/plug combo to make working cables in the past, it should still work with Cat-5, Cat-5e and Cat-6.

No, they're the same.

They are exactly the same physically.

Just beware that Gigabit ethernet use all pairs while 100Mbit Ethernet does not. Therefore if you have crappy connectors and/or cables, they may only support 100Mbit. That's the only difference I can think of.

Understand that you won't be able to make something that's cat6 just by using cat6 qualified components.

Specifically when you're making your cables, you have to make sure that you put the ends together to minimize "near end cross talk". That may explain the differences in the cat5e vs cat6 plugs -- the cat6 plugs may have guides to maximize the pair separation and keep the pairs themselves twisted right up to the crimp.

Unless you test it after you make it, you should assume that at best it is cat5 or maybe cat5e. Don't assume you've got an infrastructure that's cat6 unless you test it.

Lastly -- why do you care about cat6? Are you really planning on running a 10gig to the end station sort of infrastructure? I'll make the wild-ass guess that by the time you really need 10gig to the desktop, they'll be able to run 10gig over cat5. There is too much out there to yank it all and the first group that does it is going to make bank...

Of course there is a difference! The ONLY way to insure a dependable CAT6 installation is with a Certification Meter. We do alot of CAT6 work for Boeing Aerospace and they require us to certify ALL CAT6 runs and provide printouts of same.

A bit of a correction to what has been said. All of which I agree with. If you check the standards you will find that CAT5e is NOT certified for running 1Gb Ethernet. Given that the cost difference between CAT5e and CAT6 is so small now, I can't understand why any responsible engineer would do new installs with CAT5e. CAT6 is much more future proof, for little extra expenditure. Remember, the largest cost in the installation is the installer!