Which drive in RAID has bad sectors?

I have 4 physical drives in a single virtual drive using an LSI MegaRaid SAS controller. It seems (at least) one of the drives has bad sectors because:

Below is a screenshot of the WebBIOS: 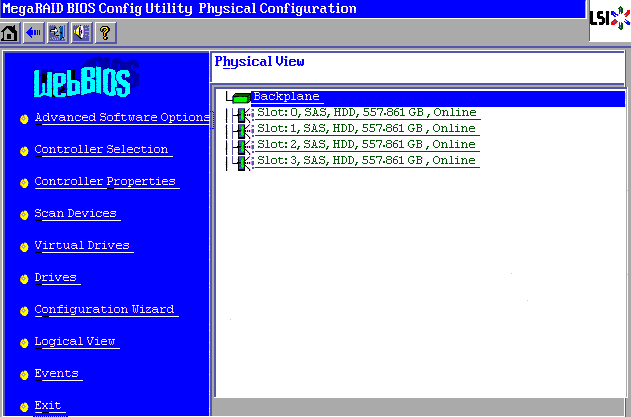 Could anyone offer any advice as to how the problematic disk(s) can be identified?

Smartmontools has extensions that allow it to poll a drive for SMART data through an LSI (as well as others) RAID array. Normally, this isn't something you can do as the RAID abstraction obscures direct interfaces with the drives.

Smartmontools might not be installed on your machine. However, it is native to most "main repositories" of most distributions, and there is even a Windows version at: http://sourceforge.net/projects/smartmontools/files/

It can be used to poll a drive behind an LSI MegaRAID controller like so:

Where "-a" means display all disk data, -d means device type (megaraid being the type in your case), followed by N which means the drive number in that controller. To access the drive in slot 0, you would say 0 here. If you wish to poll all four of your drives, run this command four times, replacing N with 0 to 3. sdX is the RAID abstraction itself, as seen normally within the operating system. Yours is probably sda.

You will see a long output from each drive, and what you're looking for is either a reported general SMART failure (which you might not find, as your controller isn't rejecting drives), or reported "offline uncorrectable sectors" or "pending sectors". Any drive with more than 0 in this field is bad. No mercy should be given to those fields, as it takes a LOT of failed reads to increment either value by one.

You can also perform a short or long test like so (same rules above apply):

If the RAID passes the errors on to you, then obviously something is wrong that cannot be silently corrected.

If you get read errors, that means that all redundant copies of these blocks have been destroyed. The faulty drives are not ejected, because there are no spares.

If you get write errors, that means that one drive continues to report write errors, and the RAID cannot eject it because it is not currently redundant. You should never see a write error in a redundant setup, so if you do, replace the controller.

If you can add more disks, create a third mirror -- recovery will complain, and you will need to check the file systems, but you should end up with as much of your data intact as can be, and I'd expect any good controller to then kick out all broken disks.

Once you are back on a clean setup, set up scheduled checks to catch these errors before they become a problem.

If you are using Linux or Windows then boot your system and use the megacli utility.

In the results check the "Firmware State" line. The degraded disk will show as:

Not the answer you're looking for? Browse other questions tagged raid hardware-raid lsi megaraid bad-blocks or ask your own question.