TrustWave's vulnerability scanner fails a scan due to a Windows 10 machine running RDP:

NOTE: On Windows 7/10 systems running RDP (Remote Desktop Protocol), the vulnerable cipher that should be disabled is labeled ‘TLS_RSA_WITH_3DES_EDE_CBC_SHA’.

Using IIS Crypto (by Nartac), I tried applying the "Best Practices" template as well as the PCI 3.1 template, however both of them includes the insecure cipher (TLS_RSA_WITH_3DES_EDE_CBC_SHA): 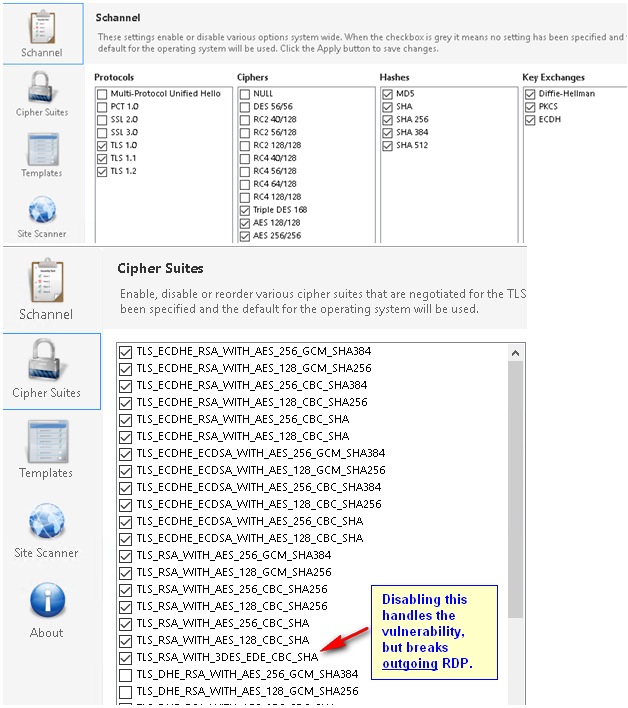 If I disable this cipher, RDP from this computer to many Windows stations stops working (it still works to some 2008 R2 and 2012 R2 servers). The RDP client simply gives, "An internal error has occured" and the event log:

A fatal error occurred while creating a TLS client credential. The internal error state is 10013.

The following fatal alert was generated: 40. The internal error state is 1205.

How can I fix the security vulnerability without breaking outgoing RDP?

Or, if the above is not possible, is there something that I can do on each RDP host that I can no longer connect to that handles it on that end?

After disabling TLS_RSA_WITH_3DES_EDE_CBC_SHA on the Windows 10 machine, I tried connecting to several RDP hosts (half of them failed with "An internal error..."). So I compared one of these hosts that I can connect to against one that I cannot connect to. Both are 2008 R2. Both have the same RDP version (6.3.9600, RDP Protocol 8.1 supported).

I compared the TLS protocols and ciphers by using IIS Crypto to do "Save Template" on their current settings so that I could compare the template files. They were identical! So whatever the issue is does not seem to be a matter of a missing chipher suite on the host. Here is a screen shot from Beyond Compare on the files: 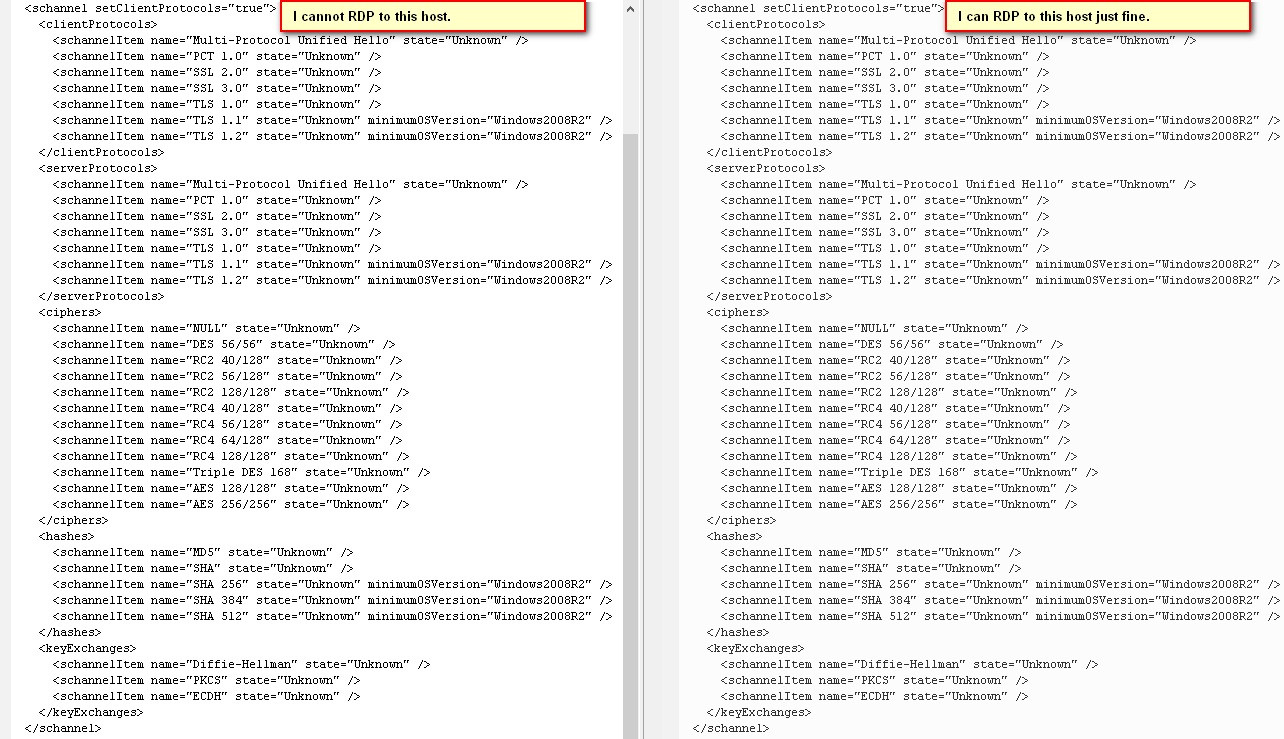 What could be different between the two RDP hosts that causes this issue and how to fix it?

IIS Crypto has the option to set both the server side (incoming) and client side (outgoing) options. There are a handful of ciphers you need to leave enabled on the client side for compatibility.

To do what you want I'd personally go with the following:

Reboot here if desired (and you have physical access to the machine).

Reboot here should result in the correct end state.

Effectively you only want to disable 3DES inbound, but still allow the outbound use of said cipher suite.

I'll share my answer from a TechNet thread but first BLUF:

Serverfault conclusion: Most likely you have some other difference in between the systems. You're connecting between different OS versions, one system has FIPS enabled and the other does not, or you have different cipher restrictions in place under HKEY_LOCAL_MACHINE\SYSTEM\CurrentControlSet\Control\SecurityProviders\SCHANNEL\Ciphers. I would certainly enable the SCHANNEL logging on the system that does work to determine which cipher is in use. Would love to hear back if you somehow got RDP to work with an alternate cipher.

We got it to work!

And the key on 2012 looks like this: HKEY_LOCAL_MACHINE\SYSTEM\CurrentControlSet\Control\SecurityProviders\SCHANNEL\Ciphers\Triple DES 168

I can confirm that use of "Triple DES 168/168" DOES NOT disable 3DES on the system. You can prove this to yourself with a protocol scanner (like Nessus) or by enabling SCHANNEL logging:

You will then have events in the SYSTEM log for example;

An SSL client handshake completed successfully. The negotiated cryptographic parameters are as follows.

For me the result is 0xa which Google reveals as TLS_RSA_WITH_3DES_EDE_CBC_SHA.

Per the article: System cryptography: Use FIPS compliant algorithms for encryption, hashing, and signing

Per the article: "System cryptography: Use FIPS compliant algorithms for encryption, hashing, and signing" security setting effects in Windows XP and in later versions of Windows

This setting also affects Terminal Services in Windows Server 2003 and in later versions of Windows. The effect depends on whether TLS is being used for server authentication.

If TLS is being used for server authentication, this setting causes only TLS 1.0 to be used.

By default, if TLS is not being used, and this setting is not enabled on the client or on the server, the Remote Desktop Protocol (RDP) channel between the server and the client is encrypted by using the RC4 algorithm with a 128-bit key length. After you enable this setting on a Windows Server 2003-based computer, the following is true: The RDP channel is encrypted by using the 3DES algorithm in Cipher Block Chaining (CBC) mode with a 168-bit key length. The SHA-1 algorithm is used to create message digests. Clients must use the RDP 5.2 client program or a later version to connect.

So both of these support the idea that RDP can only utilize 3DES. However, this article suggests a larger range of ciphers is available: FIPS 140 Validation

Ultimately it's not clear whether RDP can support non-3DES protocols when FIPS mode is enabled but evidence would suggest it doesn't.

In conclusion: I don't think Server 2008 R2 can support RDP in FIPS mode with 3DES disabled. My recommendation is to ascertain whether your system meets the conditions for a SWEET32 attack (more than 768GB sent in a single session) and whether disabling 3DES is worth removing RDP capability. Other utilities exist to manage servers beyond RDP especially in a world where virtualization is highly commonplace.

Note that for windows 7 clients you will have to install rdp client update (KB2830477), otherwise only windows 8+ will be able to connect.

**Great find i had the exact same issue on some windows 2008 R2 domain controllers, oddly my member 2008R2 servers seem ok ... and my 2012R2 servers work fine as well. Need to crack on decomming those older DC's :)

omicronx9omicronx9
1
1
Add a comment  |
Highly active question. Earn 10 reputation (not counting the association bonus) in order to answer this question. The reputation requirement helps protect this question from spam and non-answer activity.

0
Configuring IIS7 for TLS 1.0 only
14
Why does Window's SSL Cipher-Suite get restricted under certain SSL certificates?
3
SChannel SSL 3.0 error - OWA - Windows Server 2008 R2
0
Mac clients can RDP into server yet Windows clients are unable to connect
0
Server has "weak cipher setting" according to security audit, replaced offending cipher TLS_RSA_WITH_3DES_EDE_CBC_SHA, but still failing retest audit?
4
SSLSTREAM - An TLS 1.2 connection request was received from a remote client application, but none of the cipher suites supported by the server