What is the difference between SAN, NAS and DAS?

What is the difference between SAN, NAS and DAS?

First it is best to define the difference between a block device and filesystem. This is easier grasped if you are familiar with UNIX because it makes an objective distinction between the two things. Still the same applies to Windows.

With those terms in mind it's then easier to see the distinction between the following. 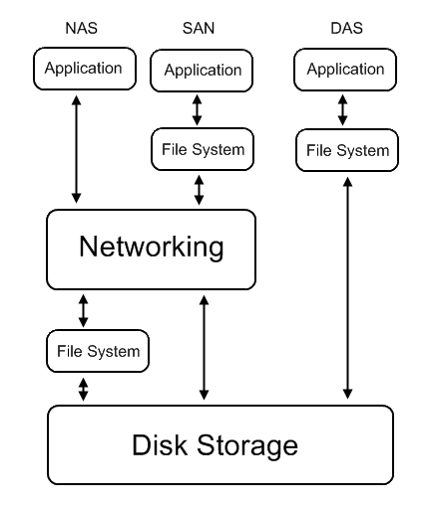 I would like to improve the answer of this question as it has been asked of me many times.

If you are asking the differences between DAS, NAS and SAN you are in the data storage context. In this area many technologies exist which share primary goals: the persistence and availability of your data.

Most storage devices share the same physical and logical structure, in order to be able to locate the data you want, you need a way to identify where your data resides, so this is the reason of why Hard Disk drives have sectors (or simply "blocks"). In many cases this reflects the layout of the data written into the physical medium. Accessing your data by addressing the sector number, while not very complex, is error-prone, and you have to keep track yourself of the data you write and the sectors you have written to. This is where a filesystem comes to the rescue, a simple filesystem will help you by addressing the blocks used and providing you a common interface to retrieve your data, the most common paradigm used is the folder/file structure (this is why is it called a filesystem).

So essentially a filesystem simplifies the interface with your data, and takes care of the housekeeping and remembering in which blocks/sectors it puts your stuff. Normally in a file system you will not refer to block numbers to get your data, but to filenames. This explains the difference between a block device and a filesystem, a filesystem must reside on a block device.

The simplest storage is a Hard Disk connected to your computer/server. Hard disk drives need to communicate somehow, and they need to use a well defined physical interface and protocol in order for your computer to understand them, the most common interface and protocol employed today for PC is the SATA or Serial ATA (Serial Advanced Technology Attachment). So a hard disk which is physically connected through the same interface to your PC is identified as Direct Attached Storage or DAS for short. To make it clear, ANY block device which is directly connected to your system makes a DAS, even a USB stick (obviously the physical interface is USB). And unless you access your disk by block numbers, you need a file system on top of it in order to put it to good use.

But what if you want to provide access to your filesystem to other computers (for sharing or transferring files)? Many protocols have been created over the years to accomplish file sharing on a Network with other computers. I will only name the main ones, per Operating System: UNIX and similar - NFS; DOS/Windows - CIFS (a.k.a. SMB); Apple - AFP. What they do is share files over a network. Of course "file" implies an underlying filesystem structure and filesystem implies block device, but because it's done over a network it's called NAS - Network Attached Storage. All of these interfaces explicitly prohibit remote lookups of block addresses (for security reasons first) and normally such lookups are not even implemented. Network file systems can be considered safe enough to be used in a concurrent way (YMMV), the Protocol implementation will take care of problems due to concurrent access to the same resource (file), normally by locking the file to a single user/requester. While any computer can share files over a network and be called NAS, solely by the power of marketing, NAS has come to mean devices whose main purpose is to share files over the network. So, if you build your own server whose only purpose is to serve files over a network, is it a NAS? Of course it is. Typically (but not exclusively) a NAS device operates on TCP/IP networks and most can easily provide access to your data over the Internet.

Let's say that I like to read my data by block numbers, because I've written my own software but I'm in need of many disk drives, more than a single computer can host. The solution would be to share the disks of other computers, but as said before my NAS doesn't provide a way to look up block numbers remotely. So I will need to use another protocol to share my disk drives, one that doesn't need a file system to operate. The following interfaces/protocols/networks exists today to share disks over a network:

Virtually any low level protocol can be encapsulated into network packets and sent remotely to allow to access the hard disk as it was connected locally. Then you can read your data by block numbers or simply create a filesystem on the new block device.

Notice! I have intentionally left many subjects out from this answer (or severely simplified them), and I am sure I have misspelled words and wrongly wrote sentences. You are welcome to edit it and make it better!

While the descriptions from itmanagement.com are ok, I think they could be a little more specific.

With NAS, you're usually referring to something where you mount a shared storage space over a network using protocols like CIFS or NFS. The system on which these are mounted does not see them as local storage, it sees them as network storage. This is important because many programs will not allow the use of network storage for various things.

With SAN, the storage space is mounted via iSCSI or Fiber Channel. You're still using a network to mount the space, but the protocols allow the system doing the mounting to see the space as local storage, thus allowing more programs to use it properly.

DAS is simply storage directly attached (ie, not via a network) to a system. Internal harddrives, USB drives, etc.

NAS stands for Network Attached Storage. It differs from traditional, directly attached storage in that, in NAS, the operating system and other software on the NAS product are dedicated solely to data storage.

SAN stands for Storage Area Network. A SAN is a network designed to attach storage hardware and software to servers. SANs generally come in two forms: as a network primarily dedicated to transferring data between computer systems and storage systems, or as a complete system that includes all of the storage elements and computer systems within the same network.

DAS stands for Directly Attached Storage. DAS is generally used to differentiate between storage systems directly attached to a server or workstation and NAS and SAN setups.

(usually disk or tape) is directly attached by a cable to the computer processor. (The hard disk drive inside a PC or a tape drive attached to a single server are simple types of DAS.) I/O requests (also called protocols or commands) access devices directly.

16
Why pick a NAS over a “normal” NFS share?
1
What is the difference between SAN vs NAS
37
What is a Storage Area Network, and which benefits does it have over different storage solutions?
2
Best method to share ISCSI lun across cluster of app servers
1
Can combine multiple NAS's in to one logical volume and mount that volume on multiple servers?
-2
How do I connect a disk array?
0
How Data Moving in Storage Area Network

3
What is the difference between iSCSI, NAS, and EVault?
8
What Makes Cloud Storage (Amazon AWS, Microsoft Azure, google Apps) different from Traditional Data center storage networking (SAN and NAS)?
2
What is Best storage servers infrastructure ? DAS/NAS/SAN or installing GlusterFS/LUSTER/HDFS/RBDB
3
DAS or NAS for VMware?
37
What is a Storage Area Network, and which benefits does it have over different storage solutions?
0
Best approach for redundant storage DAS/SAN
5
What differences are between a NAS, a shared disk file system on a SAN, and a distributed filesystem?